I still have one customer radio that I can not access and it is of course out in the woods powered by solor and running a camera for a customer.  So the only way it's getting power cycled is if I drive out there..

SNMP doesn't respond at all

http gives the "Board in reboot state"

I can SSL in and even log in but when I issue  "reboot" it sets there for a little bit and then responds "Timeout: No Response from localhost".

Any thing else I can do via SSH that might work ?

I have a similar issue.

The only way I can reboot this AP is by driving to the site.

The only way I could reboot it was through cnMaestro, maybe this will work for you Brubble1 for the one you have no easy  access too?

This is known issue in 3.2.1 where the SNMP deamon crashes or causes high CPU utilization resulting in this behavior. We have fixed the issue in 3.2.2-RC2 beta (http://community.cambiumnetworks.com/t5/ePMP-Beta/ePMP-Beta-Release-3-2-2-RC2-now-available/m-p/67641#U67641). We expect to have 3.2.2 official next week.

I'm having the same issue. Tried accessing the page you provided and would not let me log on. Need privelages or something like that.


I'm having the same issue. Tried accessing the page you provided and would not let me log on. Need privelages or something like that.

You need to sign up for the beta program here https://support.cambiumnetworks.com/beta. If you are not interested in a beta release, 3.2.2 will be officially released early next week.

This is still occuring, I have a access point atm that has this issue and is running 3.2.2

Let me know what you would like to send in and too who.

Had to powercycle it to fix. 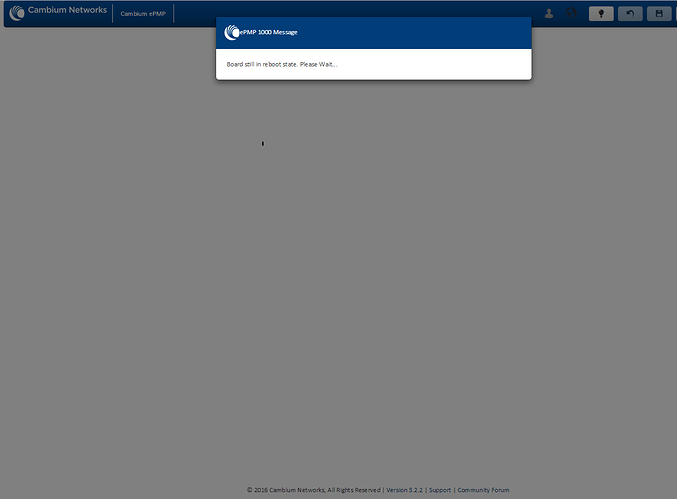 I also had an AP do this after uprading to 3.2.2.  Power cycle fixed the issue.

Just confirming that I"m seeing the "board still in reboot state" on about 9 of my 3.2.2 devices. Showing as offline in cnMaestro as well. Happens after entering login credentials via the web GUI. SSH will connect, but not allow any commands to be run.

Any official word on this?

Has the engineers been able to replicate this?

Actually it looks like exist two different issue which leads to warning message "Board still in reboot state. Please Wait"  is displayed on UI.

First issue has stable reproduce in our lab, but it does not look critical, because of just simple browser page refresh solves it.

Second one, I can assume this topic was created for, does not have simple workaround.

And we don't have reproduce for it in our lab.

If I understand you correctly the only workaround is hard device reboot through the power feeding.

We are working with one of the customers regarding this issue now.

Issue is supposed to be fixed in 3.3 Release as soon as possible.

Second one, I can assume this topic was created for, does not have simple workaround.

And we don't have reproduce for it in our lab.

If I understand you correctly the only workaround is hard device reboot through the power feeding.

We are working with one of the customers regarding this issue now.

Hard reboots are the ones that have affected us, anytime I can not access a unit I try a different browser, catches out the ones with that issue.

If I have any issues I will post them. Would you like these emailed in? if so to what address?

On a side note if you update a unit, even after refreshing the page it sometimes shows the wrong firmware, so the browser must also be caching it. Open in a new browser and it refects the true version.

Sure, in case of any issues please contact me at fedir.rtrutsko@cambiumnetworks.com.

Please clear cache in your browser to avoid issues with incorrect version displaying in footer on UI.

What is the resolution?  The AP (in this case a Force ePMP-300) is up a pole at the far end of an aerofield.  If I ssh to the device, and issue a "reboot" command, I get:

Timeout: No Response from localhost

What is the resolution other than a hard reboot here???

Only option was to power cycle the radio.

The other thing we’ve found chimera, is really with any equipment brand, and with any pre-release or work-in-progress firmware (like the Force300), if possible we like to remote-reboot the gear before doing a firmware upgrade. That way, if memory has been used up, or if some bug has the board in distress, that usually clears it up before also giving it a firmware upgrade to deal with.