I have a wifi network I set up at a new mall in Kampala Uganda.
So the contractor wanted to test and he provided me with an Internet link via cat6 from his tplink router on 3rd floor. I needed to tunnel this Internet link to the basement where my core switch and the WiFi controller are, here i created a separate Internet vlan in the 3rd floor switch and the core switch.
However I couldn’t get Internet through my 3rd floor cnmatrix ex2010p yet when I connected to the tplink cable directly, I could get Internet. It took me about 6 hour to figure it out. I decided to put a cnpilot r190 between the tplink and the cnmatrix and I got Internet through the cnmatrix.
The next challenge was having Internet on the edge-core wifi manager
I could get Internet through my basement floor core cnmatrix ex-2028-p, the edge-core ews5203 wifi manager could get dhcp from cnpilot r190 but it couldn’t ping it, meaning it could not get Internet until I put another ordinary unmanaged switch between cnmatrix ex-2028-p and the edge-core manager.

Bello is my connection diagram 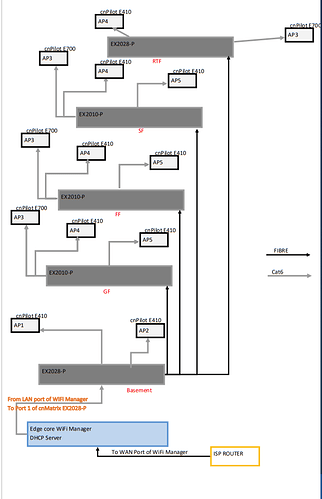