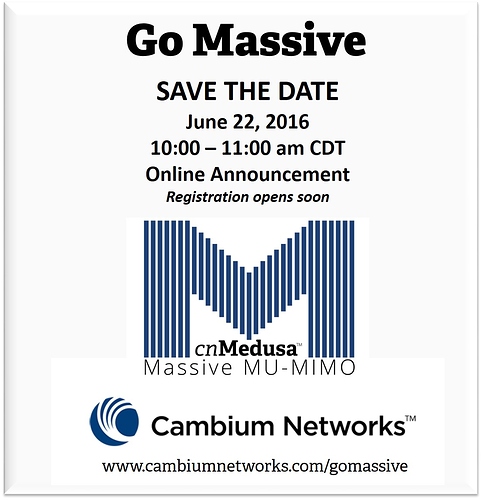 Will update this thread once registration is open!

Can you confirm this will be recorded for viewers in different time zones?

If you have any questions that you would like answered as part of the presentation, please submit them to this thread.

Is it going to be a Webminar or a youtube live video. Because for the ePMP 2000 users were under the believe that it was a webminar, the time came up and nothing. Till later that we are asking what happended and somebody posted it was a video on YOUTUBE.

It will be a live stream on YouTube. Of course, we will have the recording available on the Community and YouTube following the event.

The live stream will be on our YouTube channel.

The press release was published at 8am, and the web page is live. Please attend the live stream in about 1 hour.

should that press release have said "for preorders" cause if so i think your gonna have some disappointed IT's calling your distro's today :)

We have the standard questions on:

2) Aggregate Bandwidth at the AP

If you go by press release "available now" ;) and the 450m spec sheet i think showed their shooting for 20b/hz 20 400mbit on 20mhz theoretically which i'd hope we'll get to see during the presentation in a few minutes... only concern so far from specs is the fact it's integrated sector (kinda has to be because of the MUMIMO/beamstearing) ... but what about those people that have higher density and need different sector configs (60/120 etc)

Do you know what chipset does 14x14 MiMO? Never heard of that much before. Is it just marketing?

There will be the option to use an external antenna instead the integrated one?

What is the power supply voltage? Can it be powered by CMM4?

There will be the option to use an external antenna instead the integrated one?

they already said no to this, no connectorized pmp450m (can you imagine how many LMR cables that would be on the bottom of that box lol

how are you guys going to be choosing beta testers for the pmp450m, and when do you imagine the testing will start if your planning for full production in september

no according to the video, in the QA session.

Not a chipset.  Just FPGA, a quad core processor and sweat ;)

spec sheet says something about gps for a cmm5, where is the cmm5 spec sheet??? is it modular ?? I had a Nerdgasm watching the video 14x14!!