A cnWave network is composed of individual nodes supported by network services operating in the cloud. There are two types of nodes in a cnWave network – Distribution Nodes (DNs) and Client Nodes (CNs). DNs are the backbone of the cnWave network that distribute internet connectivity from one or more fiber optic Points of Presence (PoPs) over multiple hops to CNs. DNs and CNs are connection points for client networks, wireless access points, and other customer premise equipment (CPE) to connect to the internet.

CPE (Customer Premise Equipment) - Equipment connected to a cnWave DN or CN for customer use, such as a Wi-Fi access point.

Intent is to provide seamless connectivity of Internet to end user when commissioning CPE devices along with cnWave network, there is CPE interface configuration in addition to customized CPE prefix IPv6 in DN/CN which needs to be enabled for end user internet accessibility.

There are two ways of configuring CPE IPv6 address in cnWave nodes for providing connectivity to end users:

Let’s demonstrate these CPE IPv6 address allocation to CPE devices by topology and minimal configurations and pre-requisites required around it. 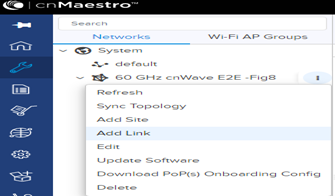 Select the MAC address of radio1 of POP and radio2 of DN in case when radio1 is having line of sight with radio2 of DN. Save.
In ideal scenario, Link will be formed between POP and DN. 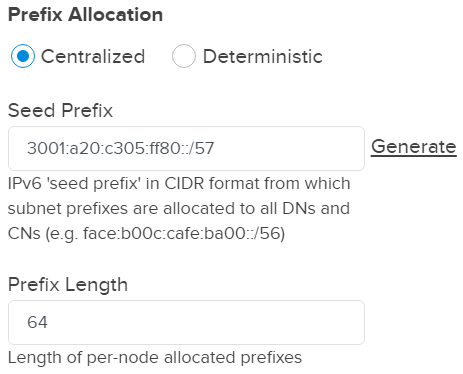 Verify the reachability of E2E controller from DN:

After Link formation between POP and DN, both the POP and DN site should turn green and onboards to E2E controller. Now from here onwards all configurations can be pushed to individual nodes from cnMaestro.
Access SSH session of DN and make sure that it has lo IPv6 using “ifconfig lo”. This is the IPv6 prefix which E2E controller is assigning to DN from its configured seed prefix value

Post enabling this configuration, PC connected to main port of DN will get an IPv6 address and default route:

Verify the reachability of E2E controller from PC:

Once reachability from DN to E2E is verified and PC connected to DN configure itself with IPv6 & default route, there is a need to reach E2E from PC too.

Config of CPE interface configuration as

Post enabling this configuration, DN will get new IPv6 on its main port:
Access SSH session of DN and use “ifconfig nic2” for IPv6 in 7001:: prefix

PC connected to main port of DN will get new IPv6 in 7001:: prefix and default route with link local IPv6 of DN 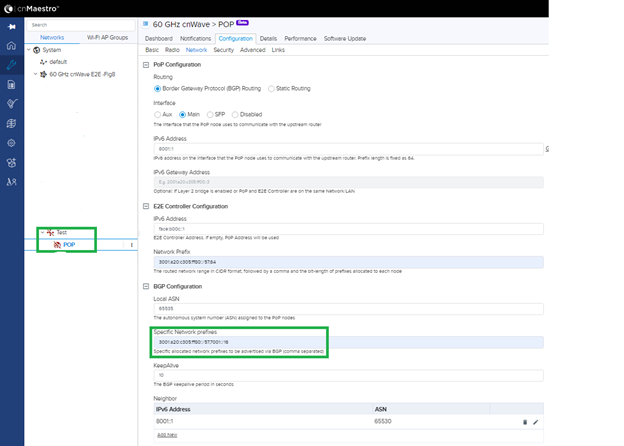