Do we have this feature yet guys?  Now Q4

Any updates regarding this feature, it's very important. It should get a high priority in feature list

Email notifications is coming in the next release, cnMaestro 2.0.0.  The release is due to be released within a few weeks.

With this feature, up to five email addresses can subscribe to notifications.  Each address can chose the minimum severity level for which you want to receive notifications.  When subscribing, you can opt to disregard the following alarms:  SM offline, cnPIlot Home (i.e. cnPilot R) offline.

Every five minutes, cnMaestro will send a notification summarizing the alarms that were raised or cleared in that last five minutes.

Here are some screenshots from the from the cnMaestro UI and of an example email notification. 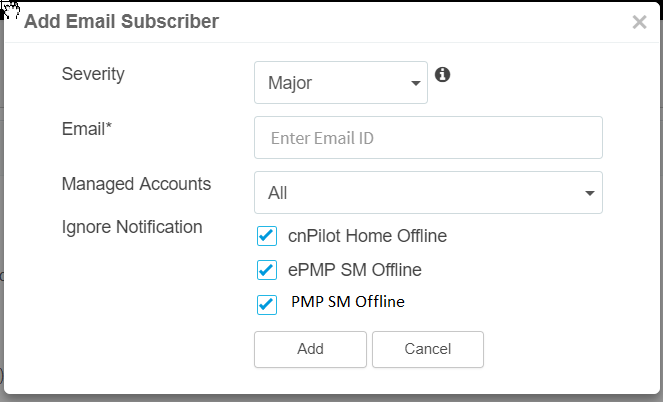 This is fantastic news.

Our company has been wanting this for a long time now.

We have just finished a 1 week long re-certification Cambium course with BMS Networks in Melbourne Australia and it was a very topical conversation on more than a couple of occasations.

We have released cnMaestro On-Premises 2.1.0 with email notification support.

The community announcement link is http://community.cambiumnetworks.com/t5/cnMaestro/cnMaestro-2-1-0-On-Premises/m-p/98194