The XE3-4 is a Tri-Radio Wi-Fi 6/6E 4x4/2x2 Access Point designed to deliver future-proof performance and value for building next generation networks. Wi-Fi 6 delivers faster and more efficient wireless network connections than previous generation Wi-Fi technologies. Wi-Fi 6E extends the capacity of Wi- Fi into the 6 GHz band, more than tripling the wireless spectrum available. With a high-speed software- defined radio, the XE3-4 enables seamless transition to Wi-Fi 6E with the ability to easily change from dual-band to (2.4 GHz, 5 GHz, and 6 GHz) mode when sufficient 6 GHz clients are available. 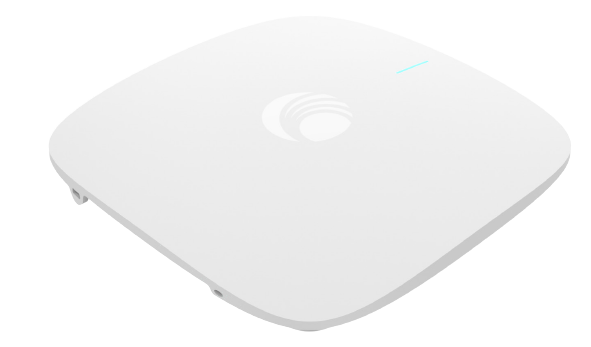 System Release 6.4 adds support for a number of new features.

Cambium Networks ePSK feature is an extension of WPA2 PSK where multiple passphrases can be assigned to a single SSID. The Wi-Fi clients can have unique passphrases that can be used by each client using this feature. The same feature has been now extended to RADIUS. The RADIUS server can provide the matching PMK for a given client, and corresponding standard RADIUS attributes can be enforced for client session. This requires custom development on the RADIUS server.

Allows the administrator to capture packets from the APs UI, cnMaestro UI, or XMS-Cloud. The administrator can filter the packets being captured by specifying a particular MAC address, IP address, and port number. The user can trigger packet capture on one or more interfaces, simultaneously view the progress of the capture. The user can also download the captured pcap file on completion.

Multicast-to-Unicast conversion heavily depends on multicast (IGMP) snooping. With IGMP snooping enabled, the device monitors IGMP traffic on the network and forwards multicast traffic to only the downstream interfaces that are connected to interested receivers. The device conserves bandwidth by sending multicast traffic only to clients connected to devices that receive the traffic (instead of flooding the traffic to all the downstream clients in a VLAN).

Radio Resource Measurement (RRM) defines and exposes radio and network information to facilitate the management and maintenance of a wireless network. 802.11k is intended to improve the way traffic is distributed within a network.

802.11v is deployed on the APs to govern the wireless networking transmission methods. It allows client and APs to exchange information regarding the network topology and RF environment. This facilitates the wireless devices to be RF-aware for participating in network assisted power savings and network assisted roaming methods.

A client with low RSSI impacts the overall throughput of the AP as it takes more airtime to deliver data at low data rates. With Enhanced Roaming, users can set a RSSI threshold. If a client connects to the AP with RSSI below this threshold, the client gets disconnected.

This feature is used to help the AP in obtaining cnMaestro IP/HTTPs Proxy server address from the DHCP server.