I had been holding off on getting any ePMP 3000L radios as there always seems to be some problem with them and older gear just keeps working well. I thought the GPS issues were resolved, but recently there seems to be a resurgence of issues. I also see people periodically concerned about Ethernet issues.

I am curious - for anyone experienced with 3000L radios, would you keep installing new ones if given the opportunity?

[I’m considering them for some small 2x2 radio locations (That are currently using ePMP 1000 or 2000) where I don’t want the additional expense of a full ePMP 3000 if I can help it.]

We skipped the e2k and use the e3kL for ptp and micro pop AP.
Once your on 4.6.2 and you use the new gps pucks they are very stable.

We have replaced several e1k APs with e3kL just to get the higher throughput and better compatibility. Then again we are also still using those e1k APs to serve pico-pops that are only for a few people.

We have a large number of 3kL and with 4.6.2 and proper GPS signal, they are fine and stable. And they are WAY faster than a 1K or 2K, especially when paired with F300 SMs for the highest use clients.

i have held off on the 3k deployments as well. We will be starting to deploy them next week. Any advice on verifying if we have the new GPS pucks?

The new round ones are much thicker than the old round ones and are slightly better than the square pucks that replaced the originals.
If you are using e3k radios, better to use cmm5 compatible sync sources like ugps or packetflux Cambium sync gigabit injector and a sync box jr

If they came with your 3000L they should be the new and improved puck because 3000L did not come with pucks initially and they announced the new pucks at the same time they announced 3000L would start shipping with pucks.

If your 3000L did not come with a puck then the only way I know to get the new ones to contact cambium support.

I do not notice the pucks being any thicker or any measurable size difference in any way. I don’t know if the pucks they are shipping with the 3000L have magnets or the 3M sticker. The only “new and improved” pucks I have are the ones cambium sent me and they all have the 3M sickers no magnets.

The only difference (other than the 3M sticker) I can see between the new round pucks and the old round pucks is a small difference (so small it might not actually be different) in the antenna/wifi symbol on the top of the pucks that I can’t put my finger on what exactly is different and the shape in the plastic where the cable comes out of the puck: 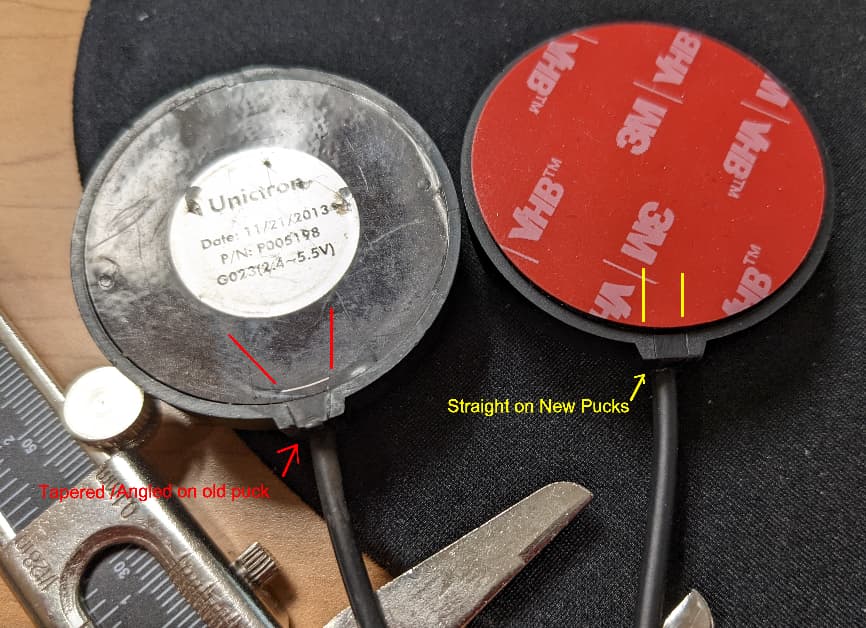 and none of the ones I got have 3m stickers. . . . . If its square its 2nd gen puck, if its round and thin (3/8" thick) its the first gen and the newest is round and about 1/2" or so thick.
I am supposed to be on a tower that has the square and the new round pucks this weekend (inspection time again!), Ill try to grab some pics