on Downloads, new version 3.5.5 show as released on year 2018. This confused to me, if new firmware available.

on Downloads, new version 3.5.5 show as released on year 2018. This confused to me, if new firmware available.

This is just a typo and someone forgetting that it's 2019. 3.5.5 is in fact the newest, stable firmware and was released in January of 2019.

do you have a date when is will be available on cnmaestro?

Can you elaborate this statement? What do you mean with "problems" and "in the cold"?


Can you elaborate this statement? What do you mean with "problems" and "in the cold"?

Here. As I was told, there were memory problems in the cold. Loss of control on both the web and ssh.

Looking back through my emails the memory problem in the cold was resolved in 2.6.1-rc4

Looking back through my emails the memory problem in the cold was resolved in 2.6.1-rc4

Unfortunately, I ran into this problem on version 3.5.x.

Once in the logs, I saw a problem with memory. After that, he lost control and i could not work out this moment.

PPPoE disconection problem with workaround is downgrade to 3.4 is resolved in 3.5.5 release?

After upgrading one ePMP2000 AP (v3.55) it nolonger connect's to cnMaestro. This AP show's "down" in cnMaestro. The two SM's (v3.55) connected to this AP also show "down". Note: Both devices are online and functioning normal. I am able to log into them online and they show a status of "Good" in Powercode. I have tried rebooting. Has anyone else had this problem? 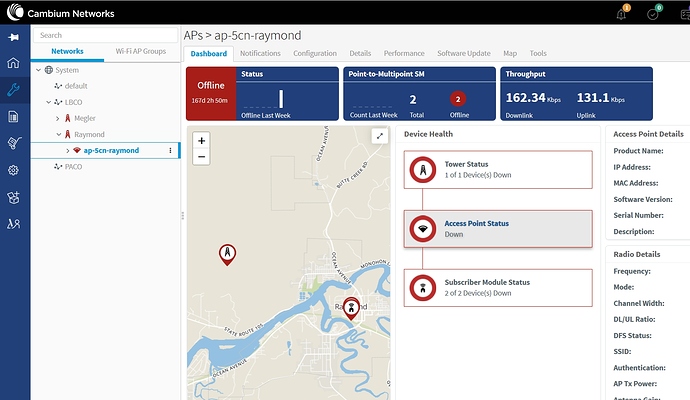 It asks for reboot (Please perform device reboot before Upgrading software) in cycle.

I think it may be lack of memory, because bridged clients updated good, one routing client updated good too after the same reboot message. But not the AP.

I understand this hardware is not real AP, but it works very good all the time, bridging up to 20Mbit/s and it's enough and costs reasonably for that small installation. Why can't I update AP's software?

Using Mikrotik in the same situation, I can disable some modules (advanced features, IPv6) and finally update. What can I do with ePMP Integrated?

The same thing happened to me with cnmaetro  I had to go back to 3.4.1

I had a similar problem but in v3.5.2 (all was fine in v3.3!). The device would show offline in cnmaestro and LibreNMS; I had no GUI nor SSH access except ... a ping.

When this first happened to me, I brushed it off as the devices were in fact still connected to the AP and still passing traffic, and what do you know a couple days later, it showed online. After a day later, it went offline and stayed there for a 2 weeks and the "offline" problem started to happen to my other APs and SMs like a virus. The solution for me was rebooting (unplugging and plugging poe cable) the "offline" APs & SMs.