Any update on when QoS/MIR will be available?

A note on ePMP1000's, eDetect is now causing the SM to drop off the panel during the scan

Performance appears to have completely tanked on my test sector with this latest update.  I'll revert to the prior beta I was running to confirm.

Running 4.3.2-RC15 performance is back to where it was before (not exceptional, but totally usable).  Nothing else has changed.


Any update on when QoS/MIR will be available?

QoS for PTP and MIR is supposed to me introduced in scope of 4.4 FW.


Running 4.3.2-RC15 performance is back to where it was before (not exceptional, but totally usable).  Nothing else has changed.

Thank you for your feedback.

Fedor, my testing hasn't been the most scientific, but 4.3.2.1 produces about 1/3 the throughput on my test link of 4.3.2-RC15, and jitter and packet loss are notably worse.   The environment I'm testing in is rather noisy in the available bands (no DFS bands yet), the ambient noise floor is about -75 with peaks into the -50 range across the band.

In this specific case, 3000 is performing about identical to 1000 gear.   I can test more methodically over the weekend.  Once DFS bands are available I can actually test apples-apples with the UBNT AC and Mimosa gear at the same location.

What ePMP devices has been tested?

I'm happy to report that I've been able to move frequencies around at my testing site and while things are still noisy, I'm seeing much better results than before. 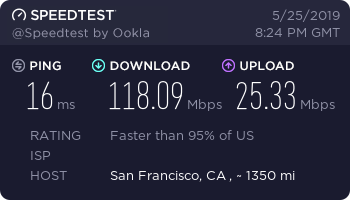 This is pretty typical on the new cleaner channel.  This is a 20Mhz channel BTW.  The only issues I've had since making the cleaner channel available are backhaul related.  A 300Mbps backhaul link isn't enough for this site anymore.

Upgraded last night and had strange problems during the day.

Both sector and CPE have errors come up when logged in to gui of connection loss aprox every 30 seconds. CPE's also ar enot detecting the internet connection. All CPE's obtain IP via PPPoE from main router, have tried changing DNS server settings but still the same.

Clients have complained of loss of connection for periods of time.

Will be revertingback to 3.5.6 tonight.

I work for a small WISP and we have ePMP2000 sectors and mixed SM's with Force 190 and PowerBeamM5 running elevate software. I did a test with upgrading one AP and all the SM's to 4.3.2.1, but encountered strange issues. All the clients except one (randomly chosen most likely) have been disconnected from AP at some point. Every time AP reboot brought them back online, but since this started to happen 3-4 times a day, we decided to go back to 3.5.6.

The other thing i noticed is when the AP was running 4.3.2.1 and SM's any firmware before that, download RSSI readings for all the SM's from sector were at -88, but E-align from SM was showing the value the radio had before this upgrade. After I downgraded AP firmware, RSSI readings were back to correct ones. GPS firmware was updated the same moment as the sector. When SM's got updated to 4.3.2.1, sector (running 4.3.2.1) had correct readings again.

So far, i am not impressed, as it caused me more problems than benefits, so i would pass this version for now.

It works when I tell the browser to disguise itself as Firefox. No, it is not a browser you've heard of, but it is highly standards-compliant. There is no reason for a product to enforce an oligopoly on browsers by demanding that a known browser be used. If it doesn't know what the browser is, it should continue to default to standard HTML. 3.5.6 works just fine on an unknown but compliant browser; 4.3.2.1 broke it for no reason, and I don't think it was documented.  Hence it's a bug, not a feature.

Oh, and as I mentioned elsewhere, it no longer reports in Monitor Radio the SM's received RSSI where it should; it instead seems to put the previous SNR there. So I don't know from the monitor tab what RSSI the SM is getting. cnMaestro does get the right value.

Hey man, would you have a file for the frimware 4.3.2.1 or if I could download it? The company I help out with thier clients always have problems with thier antennas. And the company won't send me an attachment or anything for that. Would be useful if I had the file with me so I can help out my community with thier disconnection issues.

I would not recommend using the 4.3.2.1 firmware. I had strange issues with it, and since there is already newer, improved firmware 4.4, I would go with that one.