Explain the signal for me.

The SNR Say's Mimo-A, does that mean this customer is actually performing at Mimo-A, only customer on this AP so far but other AP's have customers at -65 and are Mimo-B with similar SNR's.

The radios will typically drop to some flavor of MIMO-A if there is a large discrepency of SNR between the two polarities. Your first post shows a 9dB difference. Instead of shackling both polarities together and possibly transmitting at a lower modulation, by focusing on the good polarity higher modulation and higher throughput can sometimes be achieved.

With that said it's a little bit of red flag that the signal is so good and you have such a difference in SNR for the two polarities (...causing it to drop to MIMO-A at times).

I am wondering if you don't have a cabling problem. Almost all of the traffic in the Downlink went over the Vertical polarity. Very little went over the Horizontal. (255748 vs 142)

If the SM is Integrated then it may be worth double-checking your N-Type jumpers between the AP and Antenna.

Had a feeling that was coming ya its integrated…I’ll roll a tower team to check the nmale on the horizontal.

I know this is an ancient post but maybe someone will hear it, Has there been any resolve for this? I am seeing this on two sectors, where there is a massive discrepancy between H and V and I had it resolved down to where only a few were showing this, but changed my sector back to 20mhz channel width, which again has made a ton more MIMO-A on links.

The other thing that might be worth noting is that until actual traffic is passed across the link it may very well sit at the lowest possible modulation and show something like this. This is very common shortly after a reboot.

If you run a Link Capacity Test for a problem SM does the modulation and SNR change, or does it stay at MIMO-A?

The next thing to check is whether the difference of V to H only affects the SNR, or does it also affect RSL? If the RSL for several SMs has a large gap between V to H then it may be a hardware issue on the AP (i.e damaged RF cable).

If the RSL is relatively even for both polarities and after passing traffic the SNR is still unbalanced then I would start looking for sources of interference that are only transmitting on a single polarity.

Thank you for the response, Not sure how I missed it this time, but time flies in this field I learned.

I have checked link status's in multiple SMs. Almost EVERY SM on these sectors are showing ( different towers) are showing these gaps in the H and V, Doing a link test shows the same issue. It seems to be uplink side interference or something causing these issues, I have spoke with Cambium and a few others and still unresolved. I seen one of the sectors "flip" and work as expected for about a day then flipped back. The other remained unchanged, I have done Several things to rule out, or to at least verify it maybe some interference issues and nothing has panned out as an explaination or answer. We have been up about a year and half to two years now and had a sector go down due to lightning at one tower and now these two APs acting up as well. I am hopeful that we can expect this equipment and the cables to last longer than that. The next step is to verify the cables and maybe the antennaes but one would be suspect the exact same thing, happening to two units on different towers, at the same time being something like a bad antennae or connector or wires, but perhaps.

I have did scans with the SMs and have not found anything that seemed to interfer but will dig deeper and try a few more things before we get a tower climb set up.

Granted doing a ton of things to improve the environment and signals have dropped these back into non MIMO-A only states, though from time to time see a few still, It is just the SSR and SNR that are concerning and even in the monitoring software we use I can see the separation of these links at the AP. We usually try to keep these as close to 0 as possible with the SSR but seeing values ranging from 0-20 at times.

To me the two pictures that you sent seem to show that this is not an interference issue but a cabling or bad port issue.

In your Link Quality Indicator page your "actual" is matching your "expected" pretty well.   ...and even outperforming on the downlink.

That to me suggests there is no interference.

Your Link Status page also seems to suggest a cabling issue or a bad port. In general while it is possible to have interference affect the values of your RSL you would expect the results to be somewhat random as radio waves join to become constructive or destructive. Your AP however is showing across the board attenuation for RSL on Port B.

I agree it is odd that you are seeing this on more than one tower, but it wouldn't be unheard of for multiple towers to experience some sort of surge during a thunderstorm that causes damage to the cabling or the AP.

I hope this helps. Let us know what you find.

I think other operators would benefit from this information.

If it is a  450 AP (not a 450i) you may have some moisture / water down by the lower antenna N connectors as the cheap yellow atmospheric pressure valve fails. See image.

Need to replace both AP n type connectors  and cables to antenna as water may of seep into the cables.

Poor design and Cambium should of used the original motorola gore valve.

Expect more to fail in the field because of this.

What are the two values V and H?
What do they mean? How do they correlate between signal/bandwidth etc.

The 450 system is a 2x2 MIMO OFDM radio system. It has two separate polarity antennas and transceivers. It combines both of these to transmit and receive the data, effectively allowing for double the throughput.

V indicates the vertically polarized path, and H the horizontal.

The RSL and bandwidth depend on how well both of these paths are received, and are a result of the combination between the two. If one path is significantly different from the other (as noted in the “Signal Strength Ratio” in the top post), this can indicate a problem with the radio, the antenna connection, etc. as indicated above. Typically, these values should be within 6 dB of each other, most normally within 3 dB.

Resurrecting an old post again but I have a peculiar problem that seems related but not sure if it’s an SM or AP issue. As you can see from the link test, there is a significant gap between the H and the V SNR but only on the downlink, and that is reflected in the speeds I’m getting. Is this a faulty SM or is the problem in the AP? It’s a PMP-450 900 MHz with a 12 db yagi. 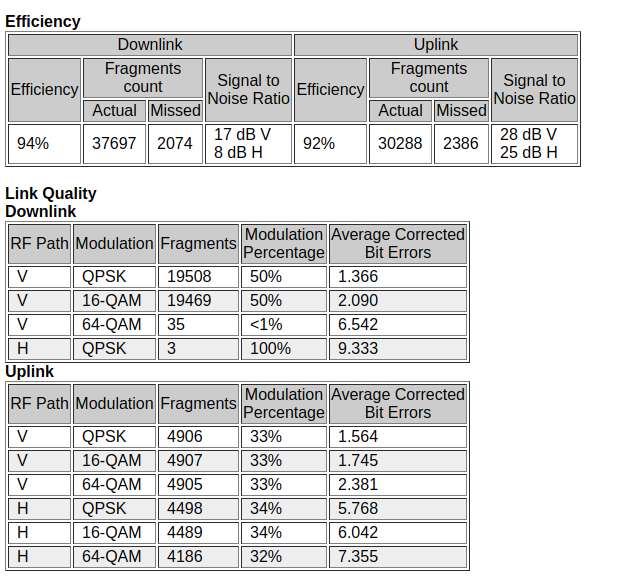 I’d say that if you have multiple SM’s connected to this AP and they’re all sharing that SnR imbalance, then I’d start looking at the AP side to make sure that the RF jumpers/connectors are good. Possibly swap them and see if the imbalance flips.

If you’re seeing it on just one SM, I’d start on the SM side and again, check the RF jumpers/connectors to make sure those look good. Possibly swap them and see if the imbalance flips.

Seems to be only on a few so perhaps it’s the SM…I’ll try your suggestion of swapping the jumpers.

I assume you’ve ran an SA looking for noise?

Is this a recent installation or did this occur to an otherwise “good” SM? If it’s a new install it could be interference or just placement. We had a single SM that would only run MIMO A from installation. Great signal but the one side SNR was terrible. Tried swapping antenna and SM with no change. Ended up moving it 3 feet to the east and it popped up 8X/8X. Very rural so not sure what was causing the interference. Told the installed you have to put the radio where it wants to be, not where you want it to be.