We have a radio that was either dropped or broken when we recieved it. But that is not the point of this post. Due to having a broken radio I got the opportunity to look at the internals. I have a concern on the unit and I am curious if it was a 1 off mistake during assembly, or if it is a standard.

In the picture below, the cap is broken off of the feed horn and the metal reflector has large amounts of a yellow glue. My main concern is with this being so close to the antennas, will this disrupt the signal?

Just ignote the coffee spots on my desk :) I have also attached the picture if you want a closer look. 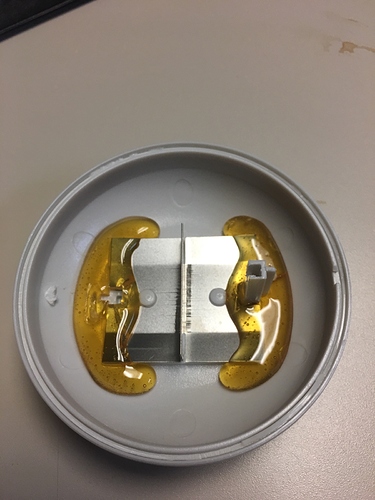 The glue won’t hurt anything. It’s wierd some of the things that have no effect on RF and somethings like certain insulated glass are a the equivalent of a lead wall

Ok cool, that’s what I was hoping. The glue does seem a bit overkill considering there are a few places to apply light tension to hold the piece in place.

That reflector will never fall off but the moment you slide the Ethernet port cap away, it takes off in the first breeze and ends up in the neighbors yard... :-)

A runner lanyard or the likes would be better for the Ethernety port cover.

YES! a lanyard would be nice!

I had to go looking for a ethernet cover that got blown away from 125ft up. We now use a 6 inch piece of bathtub drain chain and some two part marine epoxy to ensure the caps cant go too far but still allow us access if we need in there again.

Be sure to use the stainless or brass chain rather than the regular steel chain, or you will have a wonderful time trying to get it to move after a couple of months exposed to the weather.

I like the Lanyard Idea, just as long as its better than ubnt's sad attempt that falls off also.

I have taken apart pretty much every type of radio I've used over the years. And the reason this stuck out to me was all the other ones I have come in contact with use the tension of the plastic surround, or an edge to hold the reflector in place. The glue just seems a bit overkill.

every new radio i pull the cap and plastic piece. I tape the cap to the mount wrapping two times around. this keeps it right there for the install and if you ever service it, there is a pocket to stick it back in