Hello. It seems that our most recent batch of Force 200 have a high failure rate on chains with Ch0 showing good signal but Ch1 have 10-15db lower signal levels. If we keep going through the new feedhorns, we find one and point to the same tower at the same mount spot and it's within 0-2db on both chains as expected.

I am waiting to hear back from field guys on how many feedhorns they have found with this large chain mismatch. Has anyone noticed this on recent Force 200 gear? We'll submit RMA's for all the feedhorns we find that have a defect like this.

I'm thinking my chains aren't as bad as the authors, plus this is a problem with elevates that we have as well, xm ubnt and xw ubnt.....

Lo mismo me pasa a mi.

I am a field technician for Colorado Central Telecom and I work with Scheffield_d and I have been seeing the exact problem that you are describing. Many of the new installations that I have put in recently in the last 2-3 months have had chains that are off by 10-15 points. One chain will be at about what I would expect for the given distance and one will be much poorer. I am pointing to the same tower with the same access points on the tower that I have historically. The only change that we have made recently was to Elevate a lot of our former Ubiquiti users and put them on the same CN access points.

Seeing this regularly here. Attributed it to winter propagation or some other magic beyond my breadth. If this is a known issue, please address it

We're finding this to be a common issue now that we're paying attention to chains. Yesterday, we had 2 out of the 3 feedhorns have 10-12 db chain mismatches. These are brand new out of the box and when we got to the 3rd feedhorn, the chain mismatch was no longer a problem. So there is definitely a manufacturing defect going on.

Our next steps are going to be checking the last few months of ePMP installs to see which ones have huge chain mismatches and we'll have to go swap the feedhorn in hopes that fixes it.

What type of sectors are you using? We had some AP's using the TwistPort adapters with the 30 degree horns that were showing a mismatch in chains for all subs on the AP.

We ended up going back and sort of tightening the twistport some more - this resolved most of them. Two AP's we changed out the twistport as well.

I am still seeing this issue on a few AP's and some random 200's, I chalked it up to an AP issue I haven't had a chance to climb the tower to fix yet but now that I see this thread and am wondering if there is something else going on.

Absolutely. I think we have found 4 of these so far, out of maybe 20 SMs give or take?

I noticed at the time the tech was doing the survey the chains had a mismatch, I asked him to program a new radio and try again. Other radio works fine, the chains are consistantly off on the radios that show problems. Repeat that several times over. For the most part we are installing to a EPMP2000 with the matching sector that cambium sells.

@Cambium - if you want a sample, I'm not too far away from Schaumburg if someone wants to come visit :P

I have changed the configuration to TDD PTP, and the chains remain the same, although the MCS has improved to 7 and the retransmissions remain above 10%.

I'll have to open an RMA


We're finding this to be a common issue now that we're paying attention to chains. Yesterday, we had 2 out of the 3 feedhorns have 10-12 db chain mismatches. These are brand new out of the box and when we got to the 3rd feedhorn, the chain mismatch was no longer a problem. So there is definitely a manufacturing defect going on.

Our next steps are going to be checking the last few months of ePMP installs to see which ones have huge chain mismatches and we'll have to go swap the feedhorn in hopes that fixes it.

Are you seeing performance differences on the units with the chain mismatch vs the ones without? In any event, would you be able to send us a sample unit to our Rolling Meadows office and we will check it out?

If you hit me up offline I can arrange for an UPS account # to ship this back. sakid.ahmed@cambiumnetworks.com

We are also experiencing this issue but not just on Force-200's. This is from an intigrated 1000:

I’ve been seeing this on Force 180s as well to 1000 APs on both horns and omnis (in addition to the Force 200s). Normally, they are off by around 15 dBm in our experience.

Was anyone able to find a solution to this? Did we just receive bad radios or is there a firmware issue?

We have entire sectors doing this now

We have entire sectors doing this now

Sectors...as in more than one sector? And every SM on those sectors are showing severely uneven chains?

Here is our best example. This is a new ePMP 2000 with Cambium sector; no smart antenna.  SM's are almost in a straight line. They are maybe 15 degress off boresight of sector. Both have almost the same overall RSSI (-56 or so).

SM1 has pretty even chains and constantly reaches MCS15 for download and upload. SM2 has a 12db difference in chains and does not reach MCS15 constantly. I locked upload to MCS14 because of this.

SM 2's chains could be made even but this made overall RSSI drop to around -70. Both chains were less than -70. Installers called me from install location and I watched them fiddle with ealign for about 10-15 minutes. I ran wireless link tests and watch performance page as they moved dish around for me. I decided to have them lock F200 down with this drastic of a chain difference due to fact overall throughput and performance was better like this than with chains even and an overall RSSI of -70.

Installers did not have another horn with them at this location to replace and see how it worked. We plan to go back and replace it ASAP. 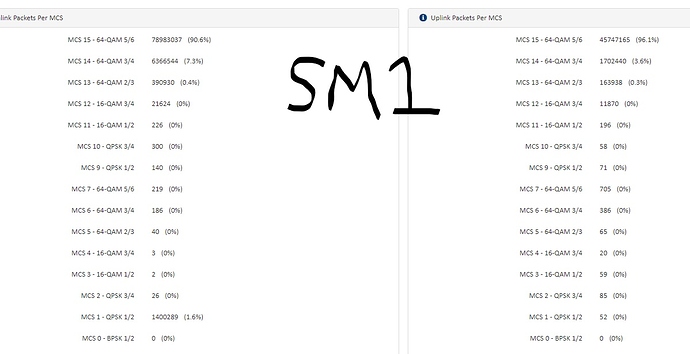 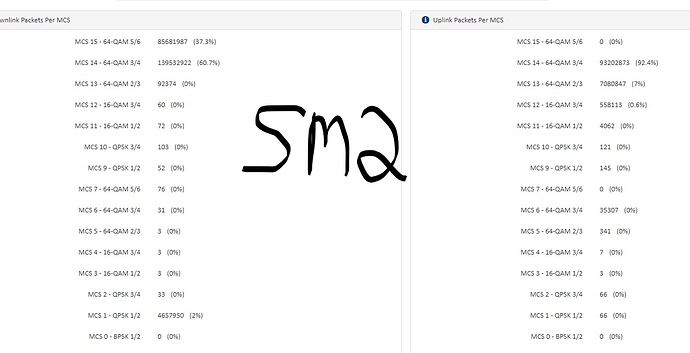 Yes, we have 2 AP's where every SM is showing chain mismatch

We thought it could have been related to the RF Elements twistports we are using, we ended up swapping all the parts including the radio to fix one so we still aren't 100% sure what is causing it.

We are getting tons of these. Our last 4 pack had 3 of them.

Come on. Can we get an answer for this?