I wanted to share an interesting real-world case study that we just completed upgrading all of our ePMP radios to the new 2.5 firmware and playing around with the new TDD-PTP 2.5ms frame mode for sync'ing with PMP100/FSK radios. In this situation we have 3 sets of radios, all on the same tower, all using the same frequency, 5815MHz.

Radio one is a 12 mile ePMP TDD-PTP link pointed due North @ 5815 using 20MHz channel width
Radio two is an 8 mile ePMP TDD-PTP link pointed due West @ 5815 using a 20MHz channel width
Radio three is a PMP100/FSK PtMP sector w/31 clients on it, pointed due South West @ 5815 using a 20MHz channel width
All three radios are now using GPS sync and frequency reuse. The two PtP links are using 2' dishes and RF armor shield kits on both the dish and radio compartment. The PMP100 antenna is using an external sector antenna with a claimed F/B ratio of 32dB. There's also some pretty decent horizontal/vertical physical separation between radios on the same tower as shown in the picture.
Before GPS sync...
Now with GPS sync... 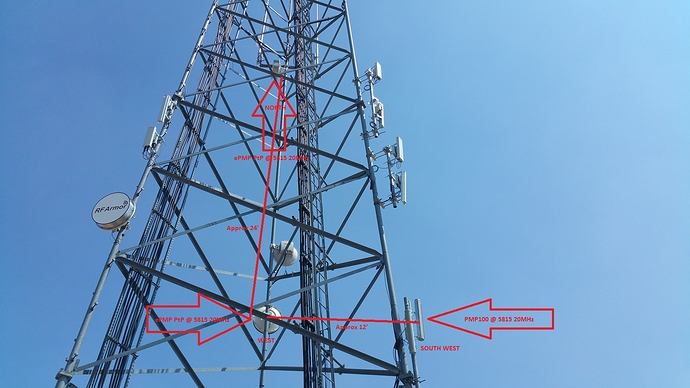 Just wanted to say though.. if I was a tower guy, I'd be very upset about antennas mounted directly on the climbing leg. Those really need to be on side-arms. Just sayin'.

Can you please clarify your ratio splits?

75/25 coming in, vs 75/25 going out means that you have 25% of your packets on the p2p links are at a time when the uplink is recieving while the downlink is trying to transmit?

Would it not be wiser to put them on 50/50 splits for all your backhauls that are on the same channel so you can get the timing to match?

Or is that not a uplink / downlink chain of high sites?

We used Cambium's ePMP to FSK co-location spreadsheet tool in order to figure out the correct timing for everything along with getting some tips from the ePMP and PMP 100 Co-location and migration recommendations guide. I've attached both for you to check out, but they're also available here.

On both of the ePMP PtP links, we use:

Putting this information into the calculator results in optimal frame timing:

The two PtP links  are downlink heavy in terms of data usage, so the 75/25 split is actually beneficial for us as most of the data is going towards the SM. Using the 75/25 split on the ePMP radios also makes it easier to get the correct timing needed in the spreadsheet calculator.

If you use a 50/50 split, you now have to start tweaking the settings on the PMP100/FSK radio in order to get the correct timing:

Just wanted to say though.. if I was a tower guy, I'd be very upset about antennas mounted directly on the climbing leg. Those really need to be on side-arms. Just sayin'.

No one actually uses those tower pegs for climbing. They use the ladder with safety cable in the center. The tower pegs are only for helping provide a standing point when mounting to the legs.