I have a temporary connection for an user 1.17km far from the AP (5GHz). The user has trees near his house in direction of the AP, so it's NLOS. I'm using a Force 180.

The connection is not so stable: it disconnects multiple times during the day.

All other users (9) on the AP are very close and in MCS15 with great signals, so I don't want to change something in the AP that can make their performances lower.

What I can do to make the connection stable?

I'll setup a clear LOS AP in the next weeks, but I want to give this user an usable connection in the meantime, without having to use a Force 200 (unfortunately there is no space to mount it easily on his roof).

Can you help me? 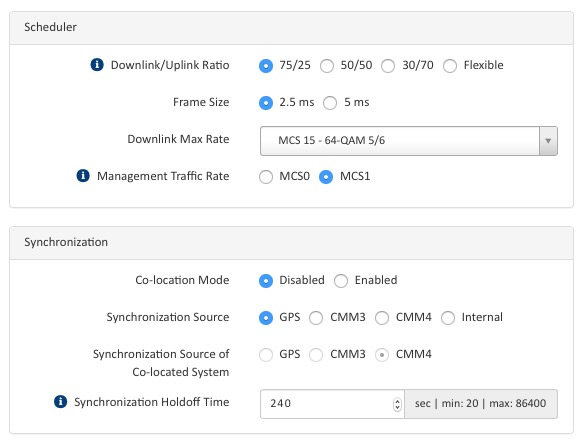 You can try setting Management Traffic Rate to MCS0 and try aligning the Force 180 again.

thank you for your answer!

Using Management Traffic Rate MCS0, how much throughput will I have less on the AP?

The Force 180 is unfortunately aligned as its best :-(

With MCS0 you will impact 1-2% of performance on the AP. But if it helps keep this client connected, it may be worth it.

Or, add a 2.4Ghz AP and switch this client to 2.4Ghz.  They do quite amazing in semi-obstructed situations.  :)

Yes, but it’s a temporary situation, maybe 3 weeks, so…

Well, we always tell our NLOS clients that wireless is all about Polarization...   so the home owner needs to 'horizontially polarize' some of those trees....   with a chain saw.  :)

This is a temporary connection you say, so that's tricky to solve a -80 when there's no time for a return on investment. MSC0 might help, that would be interesting to try that and to hear back how much that helped you (or not).

Maybe also the sector could be tweaked a few degrees in their direction? Getting them closer to the center and adding a couple dB to them maybe at the expense of a couple dB to other's who could afford to lose that for a couple weeks?

If you can't change their SM end equipment to a Force200, then maybe you could temporarily hang a Force200 on the tower and point that right at them as a point to point link for a couple weeks - even a non-synced unit as a AP for them (if you have even a narrow channel someplace) but that might gain a few critical dB for them? I'd still be tempted to try putting up a 2.4Ghz link (even a couple non-GPS integrated units in a PTP config) and might do the trick for a few weeks, but maybe that's impratical in your situation too. :)

Thank you for your support ninedd!
I wanted to find a way to get a better connection without having to physically change something.

I already planned a tower for this user and other users in another place that can see a main backbone tower, so I’ll solve it in this way, but until that time I’m trying to get the best from the NLOS connection also to have data for a future connection in a similar situation!

I can confirm MCS0 on management helped a lot: I had only 3 disconnection from yesterday, and now it’s 8h 30m and running… The longest session on MCS1 was 30m so it’s a great improvement!
I think disconnections happens when it reach about -90 as the wind moves the trees…

In similar situations we tell the client he can’t get Internet and we don’t activate it, but this is a particular situation because there will be a tower he will see in a short time, and in the meantime he’s not paying.
He asked to connect him anyway, conscious that it won’t work at the best… It’s a test, but I wanted to know how to get the best from ePMP for the future

@giuseppe4 wrote:
I can confirm MCS0 on management helped a lot: I had only 3 disconnection from yesterday, and now it's 8h 30m and running... The longest session on MCS1 was 30m so it's a great improvement!

That's awesome information giuseppe4. We had experimented with that setting on an AP earlier too, but we didn't have the same tough RF sitaution you have, and didn't see the same results. That's great to know that it helped you. Thanks for sharing.

Sure the low noise floor helped, but it's a great improvement!