This may be a dumn question but im asking anyway.

As for ePMP 1000 Connectorized radio with Sync, please find screenshots attached below, that describes device interfaces: 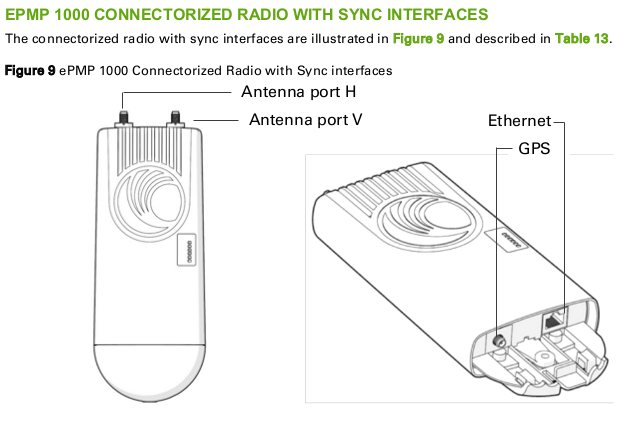 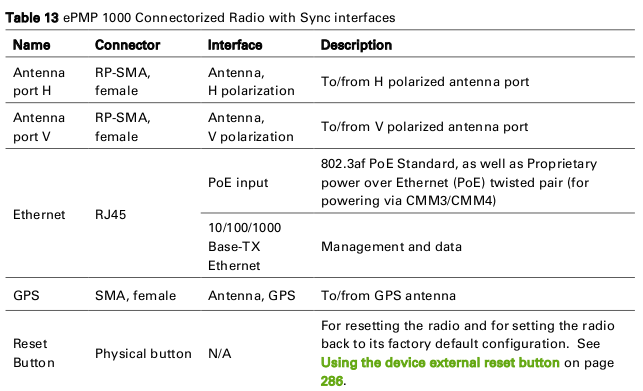 So, another dumb question,

The antenna wont work properly if they are backwords, is that correct?

Hi.  Does it actually matter which way it is connected?  WIth generic 802.11N gear, they generally say it doesn't matter - that the radios combine the chains, but it doesn matter if chain 0 on one side is heard more loudly as chain 1 on the other side - or visa versa.

Artem Grabenko - can you confirm that this needs to be connected this specific way for an OMNI ?   If it's connected backwards, what would be expected for performance or signals or problems?

On the KP Performance OMNI's, they have their 'Left' connectors marked as V and their 'Right' connector marked as H, which is the way we've been connecting them.  Are you saying that we need to Cross the Pigtails? 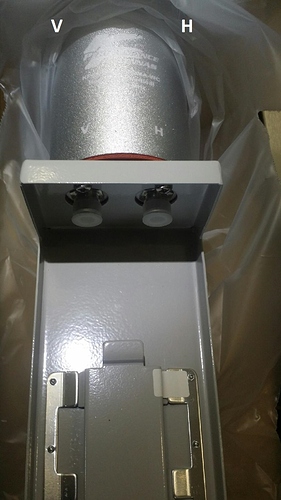 Thank you for the replies.

I noticed the v and h connections on the omni but nothing was written on the epmp unit so i automatically assumed when mounting it, it would just be left connects left and right connects right. I went to ass people to the ap and no one is connecting.

Its recommended to connect H to H channel and V to V channel on ePMP to external antena.

As I understand correctly, on OMNI antennas you can reattach radio case to avoid pig-tail crossing and connect channels directly H to H and V to V. If its unable to reattach rario case you may cross pig-tails to follow official recomendations.

Hi. OK, I don't think that re-attaching the radio case is practical on the KP Performance Omnis. They have a door which attaches, and if the case is reversed, then the door would need to open backwards against the mast.

Maybe Chris Bay or someone who has used these KP Omni's out in the real world with success can comment? We've mostly deployed the Cambium Sectors, but I hung a 2.4Ghz Omni yesterday... so I should know if it's backwards before I connect too many clients. :) 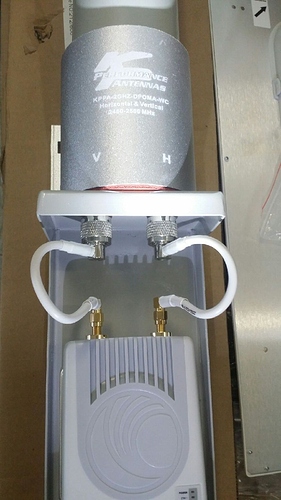 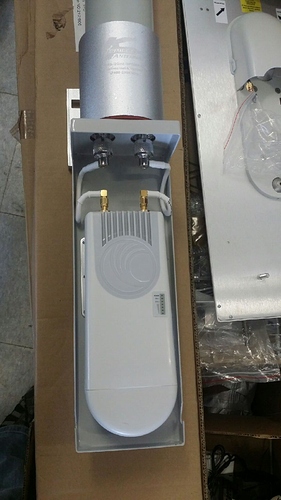 When you use the KP Omni Antennas, you need to cross the Horz and Vertical Antenna cables between the ePMP-1000 radio and the KP antennas.

We went through figuring this out several months ago.

Danny Ray Boyer wrote: "you need to cross the Horz and Vertical Antenna cables between the ePMP-1000 radio and the KP antennas. We went through figuring this out several months ago. "

Hello Danny - what specifically were you seeing the the pigtails connected straight (incorrectly) on the KP Omnis?  I'm assuming lower signal, low thoughtput?

I already have a couple antennas hung setup like this (with the pigtails straight through) and I don't really have any clients connected yet, but this below was while doing a test to one client at 3.6 KM distance and getting about 80 Mbit download speed when I got this screen shot...

Also - you say that you went though figuring thi s out a few months ago, was there a thread about this?   searched the forums and didn't find one, but I coul d be just searchging the wrong search terms too. :)

Before we installed our first Force 110 5-Ghz Parabolic, we had to figure out whether the two small coax cables that came out of the Force 110 feed horn were to be connected "straight" or were to be "crossed".

If you look at the instructions that come with the Force 110 5-Ghz Parabolic, it states that the coax with the grey tape on it was the Horz input to the 5-Ghz feed horn.

Nice and neat, but the instructions didn't say how the two coax cables were to be connected to the ePMP RP-SMA connectors on the ePMP-1000 radios.

As most everyone knows, the Force 110 parabolics were designed to be used with the ePMP-1000 radios.

I was told by one of the Cambium field engineers that it "should not make a difference" if the two cables are reversed.

We never purposely tried it  with the two cables reversed to see what difference it would make, however being a long time microwave and electrical engineer, I want to make sure that we eliminate any potential problems before we start.

There are enough problems that one has to go through without adding another variable in the equasion.

Those that have conventional microwave experience know that on a single polarized microwave path, there should be an approximate 20 DB reduction, if you are cross polarized.

your placement of the pols dont matter, your pol discrimination does.   generally this value is equal to or greater than the port to port isolation, but not always.   a lot of antennas don't print this value.

the radios will match the phases based on RSSI of the incoming signals to the correct chain, its not fixed V and H.  (the X pol antennas slant the signals and the radios will match them to the best suiting receiver.  intentionally throwing them out of phase with either the AP or SM allows the environment to move the phase any direction actually helps them deal with NLOS situations a little bit better)   thats actually a trick nasa came up with to deal with atmospheric effects in the early missions before figuring out circular polarization.

if you've got an omni with poor pol discrimination, you'll see bad performance, if your omni has good pol discrimination then you'll see good performance  (from the stand point of being able to achieve a high MCS rate with no background noise)  keep in mind the environment can cause signals to flip and change polarity.   open areas without large flat surfaces will work better... but its still just an educated guess.

if its not printed on the omni, and you can't seem to get good modulation rates from the omni, and your noise looks good.  disconnect one of the pols on your antenna, and reduce your TX power to the lowest possible value.   use a cpe to find a signal say, 50 DB.   look in ealign and you'll see both your chain 0 and 1 RSSI values.   the difference you see here is an approximate guess of your discrimination.  when you re-attach the other lead, you should see the similar values for both chains.

DO NOT HAVE YOUR RADIO NEAR FULL POWER doing this test.... you can burn them up.

another simple test, indoors in a good environment with no noise, turn your tx power all the way down, get a lock to a cpe, load the link with data, go to your performance tab and check your MCS deliver by %     you should be able to get all of your data on MCS15.   if your seeing it scattered, push modulations down one at a time unil 90% ish of your data is being pushed on your selected MCS rate.   be aware of background noise as it can alter your test results. again don't run your AP at full power, your CPE sitting at -20 and -30s rssi isn't good for them. likely wont hurt them, but why take the chance.

i've never used the KP omni, we've got some UBNT omnis that work well enough.         keep in mind the phase discrimination is affected by both the TX and RX antennas.    the cambiums antennas are very good quality and keep good tight beams, the KPs we've used do as well (we've never used a KP omni)  i've tried some no name antennas in the past with very poorly formed signals and they hit the trash due to poor discrimination characteristics.