I've been seeing an unusual number of PMP450 SMs which , after a reboot, reset themselves to Factory Defaults and are now reporting Radio Not Calibrated. Just this morning, I had three do this off one AP. All were running 15.1 firmware.

The good news is that we use ICC, so they typically will (eventually) register to an AP, and we can then program the Color Code and other info, which usually is retained upon subsequent reboots. A fix which doesn't require a truck roll is certainly fairly easy to deal with. The calibration issues don't seem to be having any major impact on their performance, but this is really unusual.

Two of them have a bunch of these in the Event Log (the Event Log on the third radio looks to have been wiped):

Is anyone else seeing an uptick in this sort of problem?

Darren - I haven't heard about an increase in this type of issue.  Can you share the model number and the MAC addresses (and MSN) with me?  If you don't want to post here, you can PM or email me... 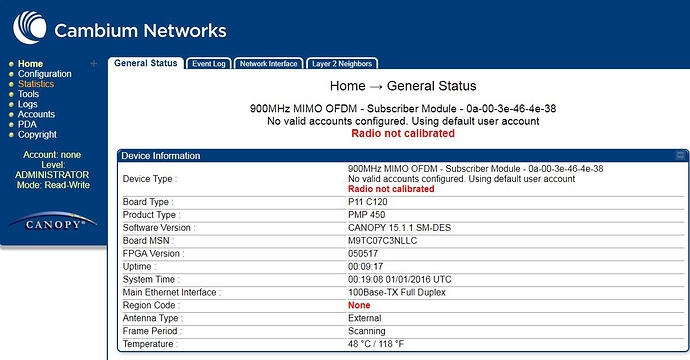 I see from the screen shot that the SM was running 15.1.1 - did you also see a lot of "Deleting a timer since it was active (T), TimerId=0x5fa0c0 (0xac32cc), TimerEvent=0x8, TimerTaskId=48, CurrentTask=48" type of errors in the Event Log? What version was the AP running on?