Below are some possible causes for the PMP450m radio to reboot randomly on its own:

Below is a rough installation diagram of the PMP450m 5GHz radio to the PoE/CMM5: 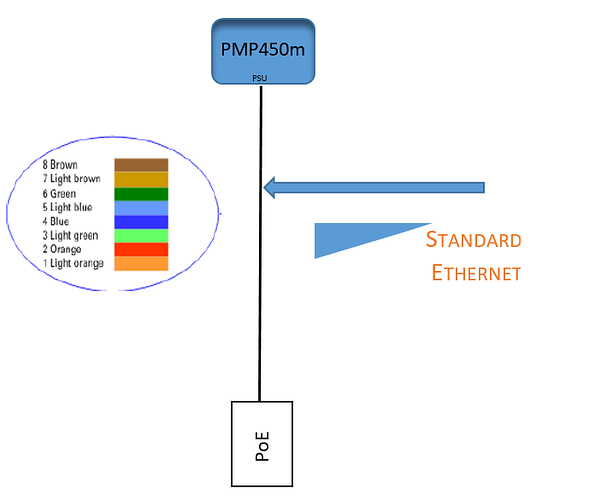 Below is the procedure to check the Ethernet drop cable from the PMP450m radio to the power source of the device.

For diagnostic purposes, unplug the radio cable from the Packet Flux device/CMM5/Power source, and measure the loop resistances to the radio and back; this means you will have to measure the resistance from:

All the resistances should be around 0.2 ohms per metre (per 3 feet) of cable and the variation value should be within 10% of each other.

The following practices are essential for the reliability and longevity of cabled connections:

Note - The maximum recommended cable length from ODU to the PSU is 100 meter.

The highest debug level is not meant for normal operation of any devices as it consumes more disk space, memory and CPU processing. This can lead to an unpredictable performance with the software release 16.1 or later version, due to certain new features added although the hardware remains the same.

Therefore, if a specific debugging required, it should be set, else it should not be used for the radio.

Under the AP UI>>>Home>>event logs, if you see the repeated “450m Power-On-Reset“ event logs that means the radios is rebooting as there is some issue related to the power supply for example, the power supply may not able to provide the minimum typical power consumption requirement of 70W.

As per the specification sheet of the 5.4G 450m unit, PMP450m model, it requires a minimum of constant 70W of power consumption to operate normally - typical normal operation power consumption range 70-80W.  However, the PoE cable length and losses in the drop cable must be taken into consideration.

Below are the part numbers of the power supply units for PMP 450m radios:

Note - It is recommended to use only Cambium standard power supply for PMP450m radios.