Radio software and documentation can be found at Log In / Cambium Networks Support, and available on cnMaestro cloud.

The following features have been introduced in System Release 21.0

This feature allows for position movement and automatic re-ranging of SMs within a sector. The PMP Nomadic mode requires a Feature Key to enable at the AP. SMs do not require a Feature Key to enable. Operators are suggested to contact Cambium Networks through their RTM or customer support for additional details on configuration and operation.

Note: This feature is not supported on PMP 450m and in PTP modes.

The Nomadic Mode page is applicable for all modules (AP/SM) as shown in this screenshot.

Allowing more than 255 slots in any direction

The System Release 21.0 enables a 5 ms frame period for 40 MHz channel bandwidth on 450m. It also enables all 450 platforms to have the maximum downlink data percentage of 15-85% at 5 ms frame. Before release 21.0, other APs and BHM had a maximum limit of 253 data slots in a single direction, which previously limited the downlink data percentage range from 34% to 67% at 40 MHz and 5 ms frame. Note that although System Release 21.0 is introducing support for 5 ms at 40 MHz on 450m, further improvements are scheduled for upcoming releases. So while this initial introduction for 450m provided some sector benefits, some deployments may still see better performance with 2.5 ms frame at 40 and 30 MHz channel bandwidths.

Note: SMs need to be on System Release 16.1 or later version to register to an AP with configuration of greater than 253 data slots.

This feature allows the user to configure the default port VLAN ID on the AP. When VLANs are enabled on the AP, any untagged frames at AP’s Ethernet ingress are tagged with default port VID. The Default Port VID can be configured in Configuration → VLAN tab, as shown in this screenshot:

This feature allows the user to filter frames that ingress the Ethernet interface of the radio. The frames are filtered based on the source Ethernet MAC address of an Ethernet frame.

This feature is supported on all platforms. To configure this feature, follow the below steps:

Any changes made to MAC Address Filtering configuration, when saved, do not require a reboot and the changes are effective immediately. Users should be careful when enabling this feature, with Filter Default Action set to Deny all, particularly on AP/BHM/BHS. In such a case, Ethernet access to the radio is allowed only from the device whose MAC address is in the MAC Address Filters table with action set to Allow.

The source MAC address can be a unique MAC address or a manufacturer’s OUI. The MAC Address and OUIs can be added in any of the following formats:

This screenshot shows an example of MAC Address filter configuration with default Action set to Allow all:

If the Filter Default Action is set to Allow all, any frame whose source MAC Address or OUI is:

This screenshot shows an example of MAC Address Filter configuration, with default Action set to Deny all: 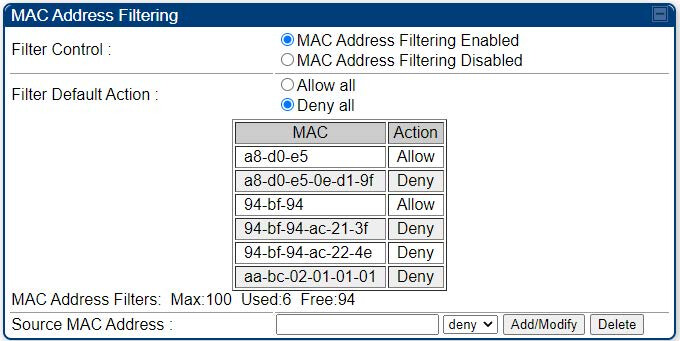 If the Filter Default Action is set to Deny all, any frame whose source MAC Address or OUI is:

The MAC Address Filter statistics are in the Statistics → Filters tab, as shown in this screenshot: 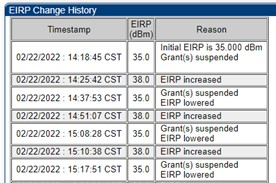 This feature adds the ability to display real-time GPS data on an SM or BHS, including on a MicroPoP AP configured as an SM. The data is retrieved from a UGPS or cnPulse module connected to the device’s Aux Port using the appropriate cable or, in the case of a MicroPoP SM, from the onboard GPS receiver. The UGPS or cnPulse may optionally be powered by the Aux port on a 450i or 450b SM or BHS. When the feature is enabled, the GPS information is displayed on the Home → GPS Status tab, as shown in this screenshot:

Note: For MicroPoP hardware, while it is scanning as an SM looking for an AP to register to, there will be around a 10-second duration during scanning where the GPS information is stale while the unit is reconfiguring. 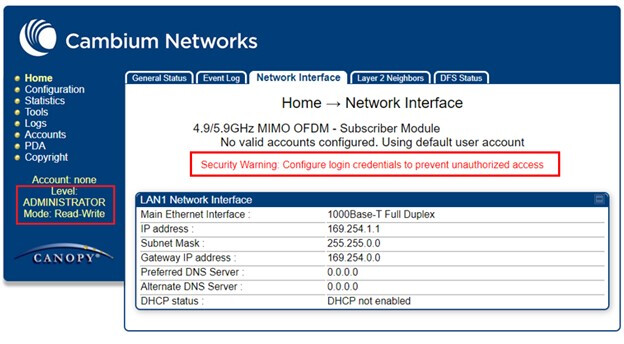 Users can only login to the accounts with non-blank passwords. Once logged in, if the user access level is INSTALLER or TECHNICIAN or if user access mode is Read-Only, the following message is displayed as shown in this screenshot:

If the user access level is ADMINISTRATOR and user access mode is Read-Write, the following message, indicating the account(s) with a blank password, is displayed as shown here: 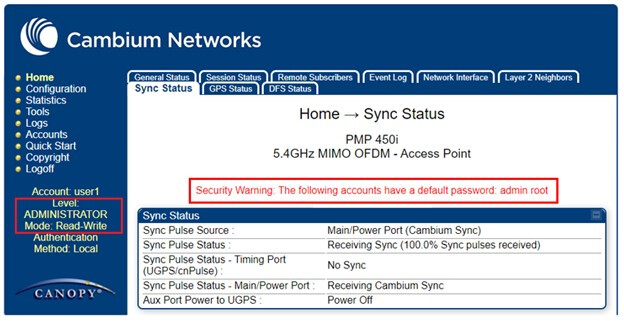 When the AP has determined to change the frequency, the Bandwidth or the EIRP/Tx Power, it first takes note of the number of SMs that are currently attached to it, and any SMs that had been attached anytime in the last 12 hours.

After the switch to the new parameter, the AP compares the number of SMs re-attaching to it to the original number. After 10 minutes, if the two numbers do not match, the AP raises an alarm indicating that not all SMs have re-attached, along with a warning banner on the AP. cnMaestro 3.1.0 or later version will be required to view and clear the new alarm.

This functionality was designed primarily for CBRS operators, where such changes might be initiated by the SAS. It is supported on non-CBRS sectors as well.

The feature can be configured on the Configuration → General page of the AP as shown here:

Note: New counters for this Reconnection Failure feature are available on the Home-> Session Status page of the AP. Refer to the PMP 450 Configuration Guide for more details. Note that this table of counters is not normally visible and it is not visible after an AP upgrade or reboot. The table will appear and begin updating when a channel/EIRP change has been made.

This is an excellent release and I highly recommend it. I’ve been running beta 4 and beta 6 across almost my entire network with no issues, and generally higher overall performance. Two thumbs UP!

This is an excellent release and I highly recommend it. I’ve been running beta 4 and beta 6 across almost my entire network with no issues, and generally higher overall performance.

Thanks, Eric. And we’ve found a few things from you testing the beta, which we appreciate!

Time will tell how good the release is.

Thanks for the continued support Cambium! I just pushed v21.0 to a 450 and a 450i however I am unable to configure the downlink data beyond 75% as implied by the release notes. Could someone please advise? (other settings are 5ms, 30MHz, 14mi, auto-contention enabled…)

Dynamic Frequency Selection bands (such as United States 5.4 GHz) requires radar detection and has a max of 75% downlink so the uplink is at least 25% so can meet regulatory requirements. Are you operating in a DFS band?

Ahh gotcha, yes that is the catch. I was overeager and assumed “all 450 platforms” encompassed 5.4GHz for some reason. Wishful thinking! Thanks.

4 posts were split to a new topic: PMP450 Receive Sensitivities in 21.0

3 posts were split to a new topic: PLL Lock Lost on PMP450i

This really requires a feature key? I must admit I am disappointed.

After updating to 21.0, We’re noticing SMs showing incorrect values for Maximum Receive Power on the Receive Signal Quality page in the GUI. Anyone else seeing this?

yeah I see the same thing