We are using the onsite version on CNMaestro Version 2.4.1-r10.

I am seeing a strange pattern in the SNR(vertical) and SNR(horizontal) graphs. 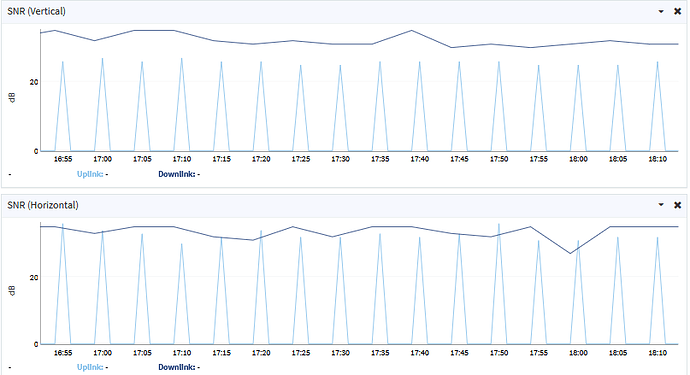 The top of the spikes are 5 minutes apart, as that is the polling rate.
However I believe the zeros in between those spikes are erroneous.

I cannot see this pattern when monitoring the radios directly.

This only happens some of the time.
Some radios don’t do it at all, some do it 24H a day, and some do it in chunks of a few hours at a time.

After looking at many of the radios and not seeing the pattern there, I believe it may be a bug in the
graphs, or in the data collection.

Are you seeing the issue with other types of graphs as well or only with SNR graphs on the radios having this issue. If other graphs also has this issue one probable cause might be device not sending the data properly every 5 minutes to cnMaestro . Please let us know which PMP software version and PMP device model is being used so that we can try reproducing locally.

Can you please raise a support ticket as well so that they can arrange a remote session if required with the engineering team in order to debug the issue.

I have only seen that pattern on the SNR graphs. The radios are PMP-450 with version 16.2.3 and the sector has the same firmware.

I tried to reproduce the issue locally with cnMAestro 2.4.1-r10 and PMP device build 16.2.3 but the SNR graphs are working fine without any issue. I am not getting the graphs like the way shown in the screenshot attached by you. Can you please raise a support ticket so that they can arrange for a remote session for debugging the exact issue.