Is Cambium going to be replacing that atrocious precision alignment mounting bracket with something better? Also how do you change the password on these things??

Can you describe the problems you have with the mounting bracket?

I agree with Simon here… what can we do to improve the bracket? If it’s atrocious, please explain why you came to that conclusion and what we can do to make it not atrocious.

how do you change the password on these things?

According to the user guide, user passwords can be configured under Configuration → Management → User Passwords.

The bracket is entirely too complicated to put together. It’s probably something that you can get proficient at if you do it all the time. But its more like one of those things no matter how many times you’ve done it - you’re going to have to read the directions out in the sun every time to get it together unless you do it every day.

It’s also very loose and the tolerances do not seem very tight. There is no place for any plastic on a bracket designed to hold a 7GBPS link in place. Cambium has a thing or two to learn from UBNT’s AF60LR alignment scope and mounting bracket here. And trust me I’m a huge Cambium supporter and I love Cambium products and reliability. CNWave just feels like it was released before it was ready.

On the actual pan of the V3000, the screws that come with the kit don’t always thread into the chassis of the radio properly. On 4 different V3000’s that I’ve built so far, I’ve had at least 2 on each one that decide to cross thread and don’t want to go all the way in with the ease. I’m not sure if the thread just isn’t fine enough or if the screws are low quality. Phillips screws really are not that great compared to allen screws for these types of applications.

Once the antenna was actually installed, the process of tightening the antenna enough to allow for fine adjustment was very difficult. You pretty much have to keep the radio loosened from the mount enough for it to be fine tuned and this means that the two pieces aren’t exactly moving in unison. When I went to tighten the carraige bolt locking nuts on 2 of the radios they would not loosen up again, meaning they were thread locked. This pretty much means I’ll have to somehow grind or saw the bolt off the precision mount to be able to put a higher quality carriage bolt in to replace the ones that were sent with the bracket.

Any of these issues on their own wouldn’t be so much of an issue, but the fact that the user interface was released without an alignment tool makes pointing these difficult when you don’t know how to track down the right angle scope in a pinch. It is also a logistical nightmare to be ordering all of the parts separately. I think most companies would prefer to order one part number with everything needed to build the radio and install it including POE, Mounting bracket, Scope Bracket ETC - and then have the ability to order spares of each item separately - rather than keeping track of 6 or 7 different part numbers. Just confusing.

We had high hopes for CNWAVE and were stoked- we run a lot of other Cambium products in our network and love the responsiveness and predictability of them, especially the aiming screen on ePMP. All of these install troubles came after taking 2 V3000’s out of the box for the first time and updating the software on them per the Cambium instructions only for it to cause a boot loop and nearly brick the units. I had to have a Cambium engineer log into my PC and help me get back into them. We had about a 15 second window of time to access the radio before it would loop again and had to convert the MAC to an IPV6 address and quickly access it and reset the factory configs after the FW upgrade before it boot looped. It took about 4 hours to get to the bottom of it. Luckily I knew what to expect for the 2nd pair we ordered.

At any rate - I’m glad to see that it is improving, I would be happy to send you videos and pictures of the mounting problems the bracket has - not attacking Cambium here just underwhelmed with the lack of aiming tools, Cloud CN support and the lackluster hardware peripherals. As far as the radio itself - it seems very solid and the adaptive power rating seems intuitive. I think CNWave will be a good product but there is a lot of work to be done yet.

As far as the password - I just updated 2 of my links to 1.1 - I go to Configuration - Management - All i get is a blank screen. 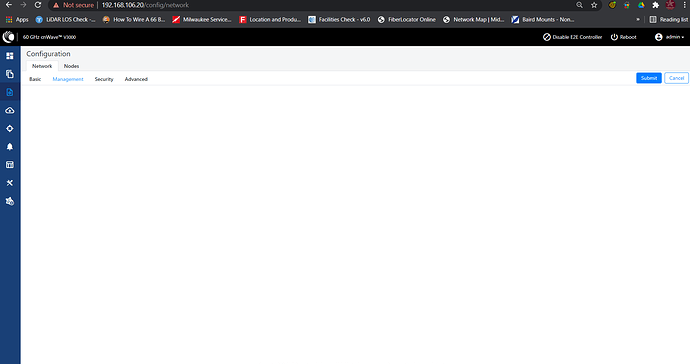 Thank you for the detailed feedback - we don’t always get to hear from end users so any information you provide is valuable. Please feel free to follow up with photos if you like.

I go to Configuration - Management - All i get is a blank screen.

. Do the other sections under Configuration work properly? I know there have been problems with the GUI in Safari on Macs in the past, but it looks like you are using Chrome here. Does it make any difference if you use a different browser?

Update- the 1.1 version hadn’t taken yet when I responded - it finally let me update the password, but here-in another problem. The radio obscures the characters and does not ask for the password to be typed in twice so the user could potentially miss key something and set the password wrong and not know how to get back into the radio.