Hello,
I’m considering installing two links in two different directions on a tower using PTP 650 and 60 and 90cm antennas.
Could you give me an example of syncing these links? What are the cons of syncing? Do I lose performances?
Is it necessary to sync to reuse the same frequency even if in different directions?
I don’t have lot of spectrum available and I would like to run both links at 45MHz.

If you are installing the radios in opposite direction then you can reuse the same frequency. When two radios are installed on the same tower eventhough in different directions, it is recommended to use the GPS Sync which will avoid the self interference. This is the con of Sync. No, you will not loose performance, instead it will be improved.

One potential downside of synchronizing with a PTP 650 is that the transmit/receive ratio must be 1:1 which means the capacity will be split 50%/50% in each direction.  When un-synced there are several other options including adaptive symmetry where tx/rx ratio is constantly adapting to traffic load.

Can’t be a radio syncronized using other traffic splitting? For example 2:1?

What if I reuse the same frequency in different directions without sync using adaptive symmetry?

Some thoughts about frequency re-use with TDD synchronization:

First consider the case of two links from the same mast, on the same frequency, without synchronization: 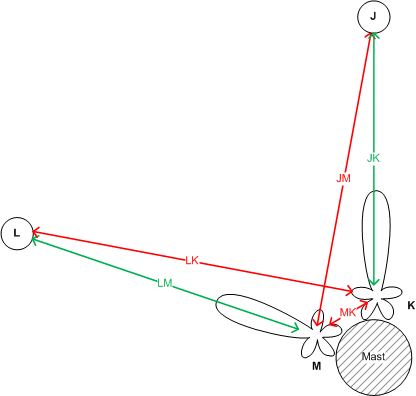 We have two wanted paths (LM and JK) and three unwanted paths (LK, MK and JM). We're ignoring the unwanted path LJ because this has disatnce and antenna pattern on its side. In this case, the interference between units colocated on the mast (MK) is likely to be the worst problem. Generally this prevents co-channel use of colocated units.

Now, consider what happens when the network is synchronised: 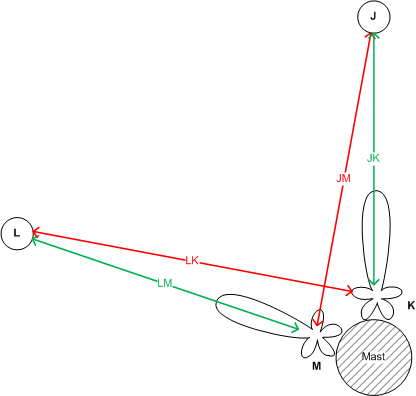 The large interfering signal MK is eliminated. The interfering signal LJ is eliminated, but we weren't worrying about that one. But the remaining interference (LK and JM) is not reduced. You still have to design to handle this interference based on the directivity or polar pattern of the antennas. High performance antennas help. Also, the situation is generally improved when the angle LMJ is large (up to the maximum of 180 degrees).

TDD Sync is a really useful technique, but it doesn't remove all interference.

Thank you!
It's a very useful answer!

Using 17GHz links with good antennas with good isolation I can have up to 4 links, on the same frequency, with at least 30° degrees different directions, and I have max modulation without interferences.

5GHz is different, but, with optimal antennas, very directive (90/120cm), is it possible to achieve something similar?

How does PTP 650 perform in interfered situations (co-channel interferences from other vendors on other near tower)?

I’m reading in the user guide that it’s possible to set for example 5:1 as ratio for TDD frame allocation.
Why isn’t possible to sync multiple units using 5:1 and I’m forced to use 1:1?

First, we can confirm that PTP 650 does not support asymmetric TDD operation with TDD Synchronization. You might want to suggest asymmetric TDD as a feature request. However, there are some limitations on what could be done:

I'd like to know HOW to work with LinkPLanner when designing links with GPS synchronization; example is that I have 13 co-located PTP650's in a single tower and have to divide this into 2 clusters (6, 7). Should I design this using linkplanner as a single linkplanner file or is it ok to create a separate file for each cluster. Will there be any difference on the resulting parameters needed to be set/configured for each radio.

Gerry, yes, you do need to design it in one single LINKPlanner file. You can get your VAR/disty, or Cambium RTM to help you with planning the TDD sync parameters once you get all the links into one file. The TDD sync parameter helps you to calculate frame and burst durations and gap and offset times so all the links can avoid self-interference from each other. You will need to enable sync on all links that will be synchronized as well.

Thanks Brian for the confirmation...