I have to say, I'm really impressed with the PTP650. We have a small repeater site that feeds an ePMP sector with around 15 subscribers on it, along with my own personal PTP450i 900MHz link that feeds my house. The repeater is high up on the side of the hill, but there are a bunch of pine tree tops that partially obscure LOS to our office. This link also goes over a large amount of the city and there's interference.

Previously we were feeding the site with a Radwin 2.5GHz licensed link, that was supposed to provide 50mbps FDX. We chose this link because we have access to licensed spectrum, and we thought that because it was 2.5 it would have an easier time with the trees. Prior to this Radwin 2.5 link we had an ePMP PtP that was struggling due to the trees and interference.

This radwin link had a lot of difficulty for some reason and would dip down to about 25mbps at times. This was causing a major bottleneck for both my own personal use, and the other 15 subscribers getting service off of this repeater. As a last ditch effort, we decided to give the PTP650 w/integrated 23dBi panels a try. One of the reasons why we wanted to try the PTP650 was because from everything we've read, it has better near and non-LOS characteristics in it, due to having a higher FFT/sub-carrier count (two times more) vs. PTP450 or ePMP. We were also interested in the Dynamic Spectrum Optimization or DSO characteristics, which allow the radio to monitor the entire band and dynamically/automatically move the channel around if there's interference.

Now that we've had the new PTP650 link in for awhile, it's definitely proven it's worth. Not only has it increased our net throughput to this site by over 7 times (25mbps before and 172mbps now ) , it's also decreased our latency in half (6ms vs 3ms avg).

We've also just started getting into using LinkPlanner for simulating what these links can do. We went ahead and entered this link into LinkPlanner, including the reduced Fresnel zone, and the interference we're seeing on both sides, and we were very surprised to see that the performance we were getting was nearly identical to what LinkPlanner had predicted. This gives us more confidence in determining if a link will work and what to expect from it BEFORE we buy and hang the equipment.

You can see here that the predicted aggregate IP throughput is 171.09mbps: 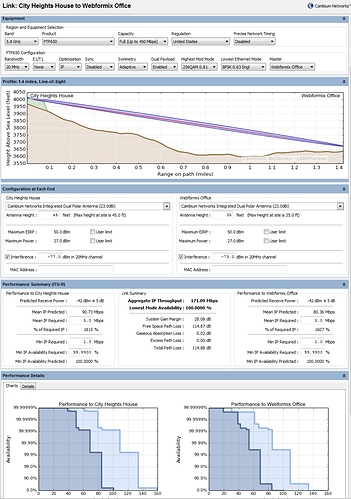 Now you can see the mean or average throughput available from the PTP650's system stats page (I've boxed the mean figure in red for easy identification): 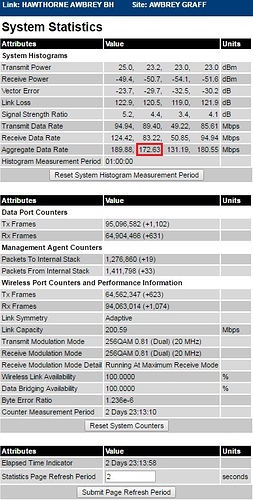 So you can see LinkPlanner's predicted throughput is within 1mbps of the actual average throughput. One way we were able to make LinkPlanner more accurate was by taking the interference spikes on both sides of the PTP, and putting them into LinkPlanner: 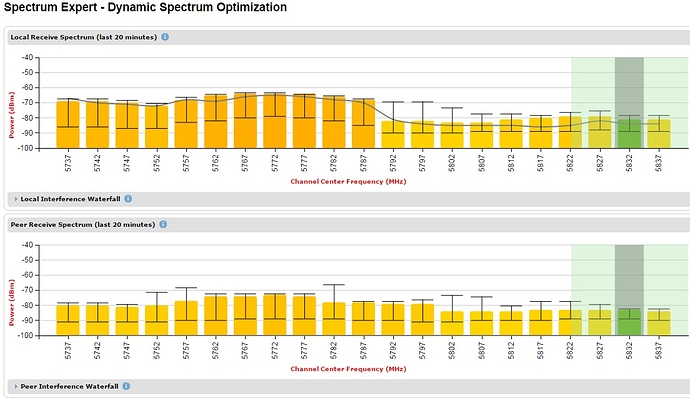 It's a little difficult to see, but basically, one side is seeing noise spikes of up to -77dBm, and the other -73dBm.

Lastly, here's a photo from the repeater site where you can see some of the tree top issues and reduced Fresnal issues that I mentioned. I've outlined the area the radio is shooting in red: 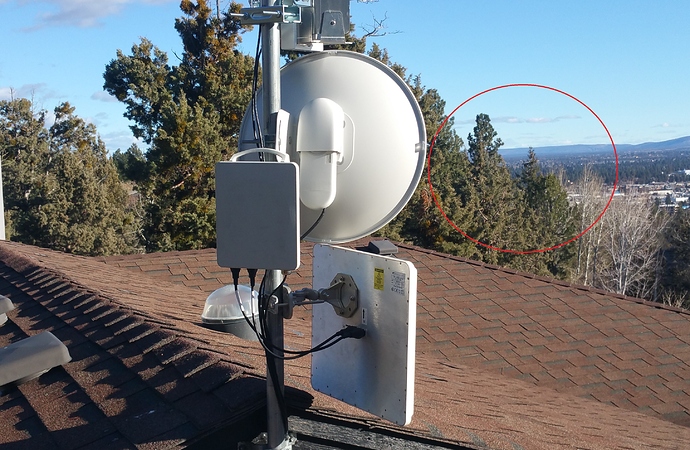 In closing, we're very impressed with this link, like I said above, this was a final, last ditch effort to see if we could get more bandwidth at this site. We really weren't sure what to expect given the reduced Fresnel zone and tree tops in the way. We were pleasantly surprised when it linked up with the signal and modulation. We're heading into winter and hope that having a bunch of snow in the trees doesn't drastically effect the link, but I will report back here either way. I use this link literally every day because it feeds my house, so I'm going to be particularly critical of it. So far so good though!

Lastly I'd like to thank Bruce Collins and Steve Kielley at Cambium for working with us on this link, answering questions, and helping us put together the order.

Are you graphing with CACTI? What is the exact OID for your link capacity?