I'm unable to use the spectrum analyzer tool (JNLP file) since last week. It worked just fine, I've never had trouble. But now, there is a message that the certificate its invalid and is now only allowing high or very high security.After that the app closes don't letting open the file.

You may have to include an exception in Java, under the Security tab, as shown below, with the IP of the ePMP device. 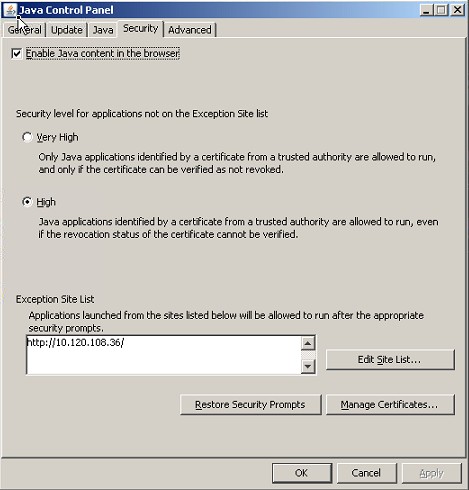 I did this too! And still doesn't let run the file.

I think I see the problem...notice how it's blocking HTTP but you've added HTTPS to the exception list? You need to add just HTTP.

I've tried the 2 ways. Actually even if was just that, It wouldn't be good, because imagine we do that with more than 100 units. That is what I have in my network.

Just to put this out there, I REALLY wish Cambium would do away with the reboot-and-download-java-app approach to Spectrum Analysis on ePMP.  The first part means you can't run remote SA on a client device, the second prevents it from working (or working consistently/reliable) in a variety of environments.  Like phone/tablet.  Then your system updates Java and suddenly nothing works because of new security restrictions, etc.  Huge headache, IMHO.

Could you try the following,

2. Make sure you have added the exception to java using the appropriate protocol (http or https) for your device

3. From the device web page, re-download the .jnpl file

4. Run the .jnpl file and agree/authorize the app to run, as needed by java

Not being able to run a SA from the client's perspecitive - that substantially and dramatically clips our wings in any sort of troubleshooting.

Not being able to do a WiFi scan to see where their router or thier local interference is, substantially clips our wings.

And not beign able to have eDetect report anything except things on it's own channel widh very dramatically and subsantially clips our wings on any sort of troubleshooting.

Further sidetracking this thread (sorry), Here is my idea of a great SA/APeval tool:

Scan the entire band within which it can operate, identifying every transmitter it is able to see on whatever channel widths or settings, wifi or ePMP or other.

If the device performing the SA is an AP, identify if any visible APs are also Cambium devices with sync, and tell us if the sync/timing/updownratio/etc on the remote AP and the local one are compatible - I'm assuming this can be derived from the remote AP beacon and comparing its frames to the local sync pulse.  IE, flag APs that will or won't present interference based on GPS sync timing and settings - I'm sick of having to shut down 3-5 towers in order to be sure that visible signals in SA are actually capable of interfering.  Also flag if a visible signal is a Cambium SM - if we see a bunch of SMs on our target channel, that tells us we'd interfere wtih those SMs and their sector without more careful planning.

On the ePMP2000 AP with smart antenna, provide information on WHERE each signal comes from - if we can see that a particular problem signal is coming in from the left edge of the sector vs center or right, that can really help identify the actual source.  (it would also help if we had fields in the AP to specify sector width and azimuth...)

If the device is an SM or BH slave, support (PLEASE PLEASE) the ability to perform a spectrum analysis remotely, like the old Canopy products - run SA for a predetermined time, then reconnect and report.  (SA on boot use to be really nice too - subject to change of course but if the radio was fairly recently rebooted then we could just look at the SA results it had already gathered)

I've also been thinking about an SM warning when it's set to talk to a particular AP but that AP is impacted (for this SM) by signal from another visible AP on the same or overlapping channel.  We've had situations where SMs will be on an AP 5 miles straight in front of them at say -60 with 15dB SNR, then when that AP is rebooted they hop onto another AP and tower - sometimes 120 degrees off-axis!! - that may be 15dB weaker, and won't hop back without nudging. (Most often with PMP320 however, which we could never reliably get locked to one specific AP)

>Scan the entire band within which it can operate, identifying every transmitter it is
>able to see on whatever channel widths or settings, wifi or ePMP or other.

YES.  It's bizare to me that this isn't considered an essential feature.  Every other WiFi(ish) device we've touched (10-15 year old technology) has the ability to display all other wifi stations it can hear. It makes no sense for the SM to only report the same channel and width that it's already on.  If the AP is in 10 Mhz widths, and if the client's home router is in 20 Mhz widths - they absolutely can still interfere, yet we have no way to see what the SM can hear.

The ePMP uses very similar hardware (vis. Elevate). So why isn't this in ePMP? Yes, I know that many implementations do lose RF connectivity in the process of scanning, since there's only one receiver in the Atheros 802.11n chip. But this is really useful, on both the AP and Station sides, during setup. And it helps identify who might be causing the noise on a channel, if it has an 802.11 beacon.

PLEASE give us a better SA option without java downloads and ability to view from the client without disconnecting. Your competition does!!!

I'd also like to know which users are on using bandwidth activly so we know if it is okay to take an access point down to work on it. If only 2 users are on passing traffic, we can contact them and tell them we need to take the AP down for 20 mins.

Sometimes I dream that Cambium developers hate us,

Unless I need to run spectrum analysis...

If the device performing the SA is an AP, identify if any visible APs are also Cambium devices with sync,

Or just  make the SA GPS aware so it doesn't even show other APs in the first place.  Seems to me that if a radio is in AP mode with GPS sync then the SA should only show me RF from the time slots where the AP would be listening. Why do I want to see RF from time slots my AP would never see.  That way I don't have to shut down all my AP's using the same Freq and if I do have an AP that isn't in sync I'll know.

Or just  make the SA GPS aware so it doesn't even show other APs in the first place.  Seems to me that if a radio is in AP mode with GPS sync then the SA should only show me RF from the time slots where the AP would be listening.

A post was merged into an existing topic: How do you run the Spectrum Analyzer?