We’ve been in COVID for a long time now. With working from home and schooling at home, connectivity is vitally important. What stories have you heard from your satisfied customers about how they appreciate their connectivity?

We got this review in the other day, this client is connected to a PMP450m 3GHz using CBRS, and the client radio is a 450b high gain.

As a side note, I’d STRONGLY encourage all WISP’s to focus on getting positive Google reviews. It makes a huge difference in your search results and your standing against large, incumbent ISP’s. We use a service that emails our existing client base and also just after a new installation and politely surveys them. If it’s a good rating, they get led to a google review page, if it’s a poor rating, it immediately opens a support ticket for us. 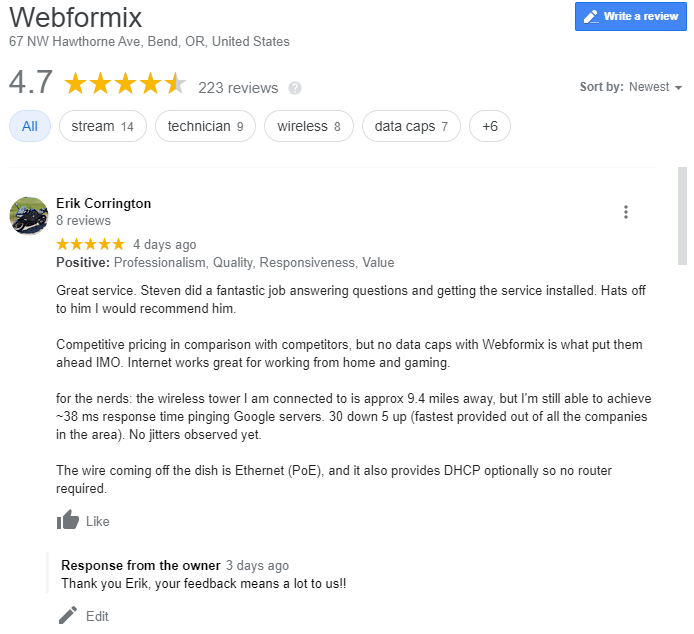 Our WISP is about as rural as it gets. A smattering of small towns with junk DSL where they are lucky to get 3 meg. We are getting requests for service due to COVID lock downs every week.

We had a teacher living about 3 miles outside a small town on the tail end of a DSL string lucky to get 1.5 down trying to host video meetings with her students due to the lock down. She said it would freeze and the students couldn’t hear her. She has some tree coverage but we were able to bring her up on a 10 meg package using ePMP 2.4Ghz. We turned her up that morning and she hosted her next class that afternoon and was very happy. She said everything worked great.

We recently deployed the PMP 450i 900 at a remote tower and were immediately contacted by multiple people who needed service for their children’s remote learning. All had zero coverage of any kind except satellite

One was using satellite but it was horrible, taking 30 seconds plus just to pull up a web page and speeds were all over the place. She said it was completely unusable for video conferencing. They were about 4 1/2 miles from the tower in some mid density trees. I was skeptical on being able to get them but we ended up with a solid -78 with MIMO B 4X capable of 18.79 down and 2.17 up. Easily providing for their 7 meg package. They were very appreciative as they had two teenagers who were having to drive 14 miles round trip to get to an internet connection they could use. Normally we would not turn up this low a signal, but honestly, its been solid as a rock and has never dropped session, even during an ice storm.

Another had tried satellite with similar results and had canceled it. She was just over 3 miles away deep in the hinterlands of a river bottom with significant tree coverage. Again, we were skeptical but actually ended up with a great signal (-68) with MIMO B 6X (borderline 8X) She was having to take her children into her parents in town to do their homework and said it was a chore.

We also brought up another customer on 450i 900 about 2 1/2 miles away. He was home bound but not due to COVID. He had fallen from a roof and broken both ankles, confining him to a wheel chair for 3 months. He had built a cabin in the woods and had an internet business on the side. He had previously handled his internet sales by driving into town for internet access. We tried getting him on 2.4 but the trees were just to thick, with a Force 200 only pull in a -81 at best. The 900 is getting a -64 with MIMO B 6X. He was very, very, happy and loaded us up with jerky, LOL.

FYI, if you are using 900, the 17 dbi dual slant KP Performance YAGI’s are gold!

This is just a sampling. We have turned up many in this remote rural area due to COVID lock downs, remote learning, and home schooling, or people who are now working from home due to COVID.

In many of the small towns the local providers are working to do away with their old wire line facilities and where they still have them, performance is terrible. 5G will not save the day here. (neither did 4G for that matter).