Does communication mast and aircraft on line-of-sight affect the signal strength of the radio at client’s site?

I installed ePMP Force 180 SM at a client’s site on Friday at signal strength of -65 dBm. When I checked the Subscriber module (SM) yesterday and this afternoon, the signal strength has increased to -74 dBm. I observed that aircraft flys at intervals over the SM line-of-sight to my base station.

Could this be the reason in the increase in the signal strength of the SM?

How can I overcome this signal interference on the SM?

Attached to this, is a spectrum analysis result done on the CPE.

Anything that has metal can attenuate an RF signal, in addition, airports can use 5GHz for radar, along with being heavy WiFi usage areas. I'd suggest trying to find a path for the client that doesn't cross the airport, but if you can't do that, possibly try an F200 or 2' dish, and/or changing the 5GHz channel or using a different band that isn't used for WiFi, like 3.65GHz.

I am not sure by your post if you are aimed directly at an airport or not. If you are... as Eric suggested it may be attenuation, it may also be reflection. It could be that you installed the SM and aligned it on a reflection from an aircraft/s on the tarmac. Would be easy to do with the 180 having such a wide beamwidth. The aircraft or aircrafts may have now moved and the reflection path is no longer there, causing the signal level to reduce.

We had this happen to us once with a water tower. Sent an installer out to an industrial area to install a F200. Gave him azimuth to shoot for and told him he should be in the 60's. He called saying best he could get was in the mid 70's. Also said eAlign was very touchy, a few degrees in either direction and RSSI fell drastically and SM would disconnect. He then proceeded to tell me the highest signal strength he could obtain was while aimed directly at a water tower. I immediately knew this was not correct, and asked him did he not aim where I told him. He answered, no I just went up in the bucket and started sweeping the area. I then advised him to aim where I had directed him to aim previous to leaving for the install. Bam, RSSI in the mid-60's. He was aiming around 70 degrees away from our tower, catching the reflection off the water tank. LIke the water tower, airplanes are large and metallic and will reflect RF.

Now, thinking about it, the most simplest explanation is SM shifting. Any chance this happened since installation? Or, did the SM radomly connect to an adjacent AP since install?

Many thanks for the replies.

My SM light-of-sight did not pass through an airport rather aircraft like helicopters etc pass through the SM line-of-sight at intervals. From Google earth, we followed the path to install the F180. So we are not catching reflection and the SM was tightly fixed with metal clamps.

can someone please take a look at the spectrum analysis result attached. My SM is attached to the AP at a frequency of 5350MHz?

I don't want to open your SA document. Please just post a screenshot image of the SA. ALSO, what region are you in?

What frequency and channel width is the AP set to?  Is it locked to one frequency, using DFS with up to three defined, or ACS?  What regulatory region?

You're talking about a drop in signal level of about 9dB, if the SM originally saw -65 and now sees -74.  That can be accounted for if you were running 20MHz channel in 5.8 end of the band (FCC limit 23dB transmit) initially but then switched to 20MHz channel in 5.2 DFS. (FCC 13dB transmit limit)  Or you could be looking at a case of something (tree branch, eg) that has moved to partially block the signal.  You're NOT necessarily looking at any change in interference/noise - That would cause the SNR to worsen (smaller number) but would not change the received signal level at all.  (If the noise floor gets stronger, or the signal gets weaker, then SNR goes down which impacts link quality and capacity, but generally speaking interference/noise has no impact whatsoever on received signal strength, it simply determines how much of that received signal can be usefully separated from the background noise - the Signal to Noise Ratio)

I am in Port Harcourt, Nigeria.

The SM is attached to my AP at a frequency of 5350 MHz on channel width of 20MHz. Can you please suggest clearer frequencies from the SA document?

Please find below the SA document from the SM. 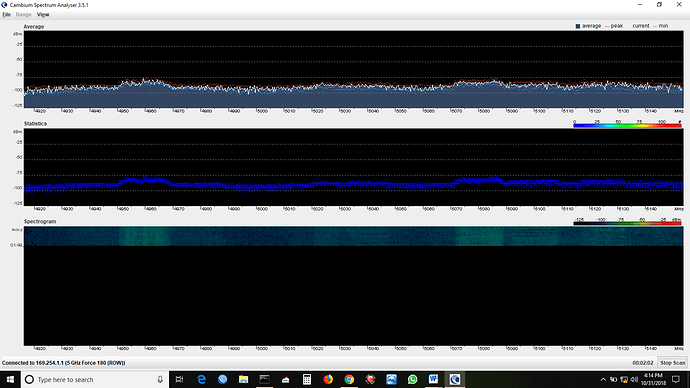 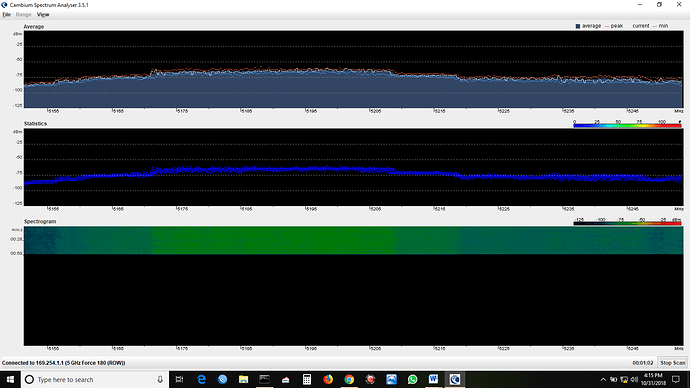 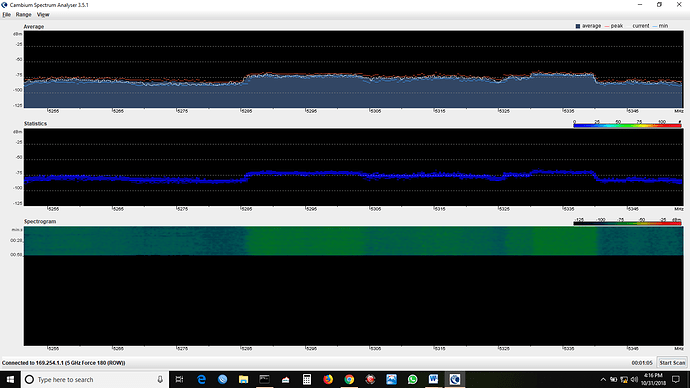 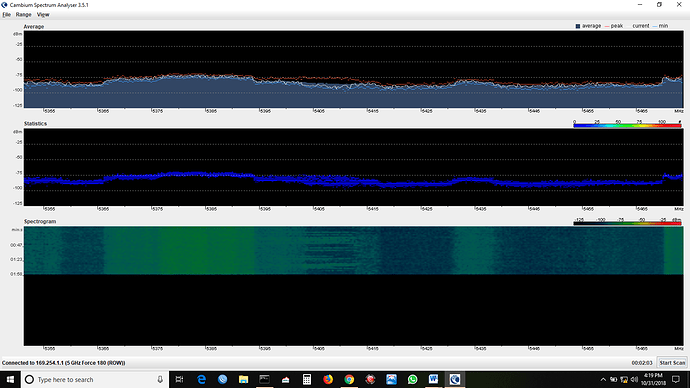 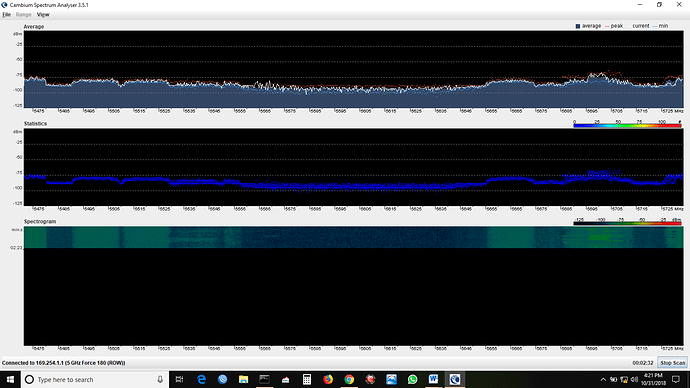 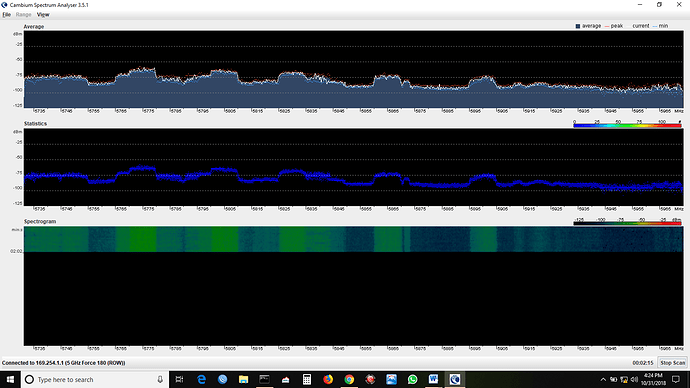 I am in Port Harcourt, Nigeria.

From my client's site to the base station, no visible obstacle at line-of-sight. I am thinking, maybe the frequency at which the SM is attached to the AP is noisy. That may be the reason behind the increase from -65 dBm to 75 dBm.

I ran a spectrum analysis which is attached to my report above.