Urban Deployments providing the speed of the future NOW

speed of the future NOW, you say? Yes!

Have you read about AT&T and Google are exploring gig wireless? most likely you have and hear we sit on the eve of the wireless boom looking at the big dogs heading for our fence. Selling small packages will work for some, but for most it is not a survivable business plan, what do we need to survive? Speed of the Future NOW (or soon) I'm not advocating gig wireless for ePMP but 500Mb capacity would be nice especially with Urban Wireless Deployments. Mimosa is generating the product that will "allow" us to do this. Cambium I Love you to death and I totally understand that we have been waiting on 802.11 AC Wave 2, but I hope that product gets here soon! The bonus of 4x4:4 MIMO would be awesome you could call it Medusa’s Little Brother.

Cambium are there any plans in the works?
Should I just buy ePMP 2000 Radios because the Wave2 stuff will be backwards compatible?
Is there a 4x4:4 in the works?

Or is Cambiums vision of the WISP one of being mounted on a tower or high structure and not a house roof top or Electrical pole?

With that being said when the big dogs finally work their way down the block to my fence, I want to be able to run out to the fence and Bark and not be stuck on the patio tied up.

So there are a few public tid-bits out regarding Cambium's advancement of ePMP...

- Cambium has stated that they are actively working on 802.11ac

- They're commited to making it fully backwards compatible with the current 802.11n based ePMP equipment, this includes ePMP 2000

- Their cnPilot E400 and E500 series taps wave 1 802.11ac already, so they already have some experience in this field

- A Force 300 radio was announced at WISPAPALOOZA that *might* use 802.11ac, but it's unclear based on the slides

I'd like to add that Mimosa (and no other radio manufacturer at this point) has working GPS sync, back to back frequency reuse, and a truly scalable TDMA system, based on an 802.11x chipset. 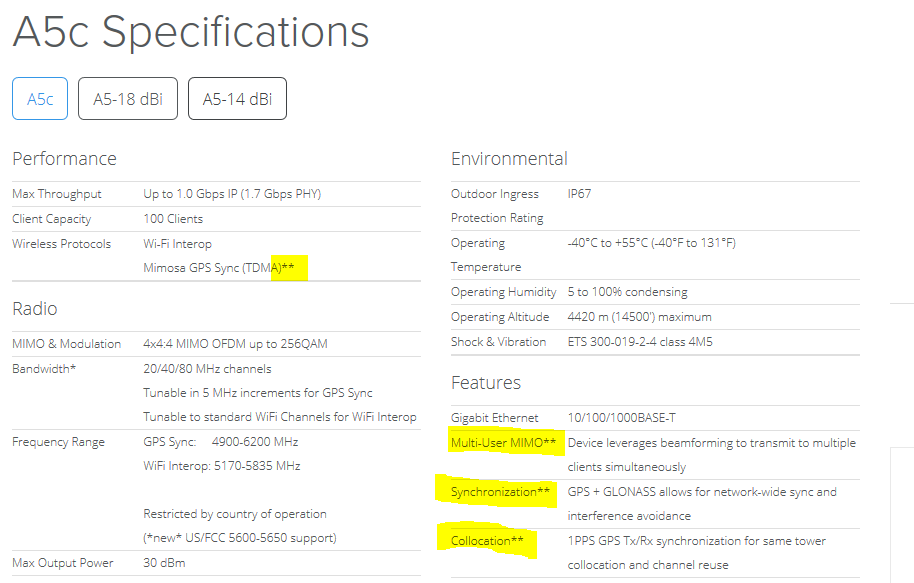 mimosa.PNG914×583 33.3 KB
Last I read about mimosa is that the tdma and gps will be available in a future software update. So unless their spec sheet from their website is out of date, I would be leery of future promises. Cambium seems to keep their promises while others cough ub cough nt miss theirs. They are making a billing management software for the devices ucrm and they do have routers and switches. That being said where is my cmm5 and where is my billing management software cnmaestro?
Cory_Ditzel (Cory Ditzel) October 27, 2016, 2:34pm #4

According to the presentation at WISPApalooza, Mimosa should have 50/50 TDMA firmware next month and 75/25 firmware Q1 of 2017. The performance from Mimosa that I've seen so far has been nice on our network, but I really like how Cambium has preformed as well. Like it was mentioned above, they just need some greater capacity beyond what the 450m will offer.

According to the presentation at WISPApalooza, Mimosa should have 50/50 TDMA firmware next month and 75/25 firmware Q1 of 2017. The performance from Mimosa that I've seen so far has been nice on our network, but I really like how Cambium has preformed as well. Like it was mentioned above, they just need some greater capacity beyond what the 450m will offer.

the 450m, as announced in a webinar over the summer is expected to "well exceed" 1gbps per basestation.

no details exactly how they plan to do it, but with 14x14 mimo, you can expect some major performance by the platforms maturity.

Any body have seen avantage of 4x4:4 and MU-MIMO for Mimosa device over Ubnt AC device ? The throughput Mimosa claimed on Netonix forum was nothing impressive if using 80 Mhz bandwidth lengh.

Or better, just stop the 450 licenses madness and sale those at diruptive price. Learn from Ubnt, dirsuptive price. ePMP was a good step but it's not enough. If you can sale a 450 SM half the price with limited throughput, every license you sell after seem like overcharge for costomer. It's not the AP price  hurt, it's the price of the SMs. It's so high it cost me less by customer to invest in fiber than in 450 series and we are in a place where the're lots of law to pass fiber in public pylon.