Looking to hear some feedback on what is the typical power consumption you are seeing on your 400C/425 radios? We test and spec it out for worst case scenario where the internal heater is running 100% of the time in extreme cold temperatures but wanted to see the average consumption from real world deployments.
Thank you in advance.

Here is an example of an active link:

And traffic over the link in the same time period: 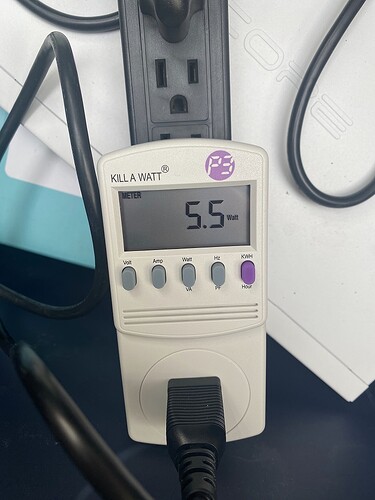 but average consumption is pretty low

Hi @Jacob_Turner. Do you know how this compares to F300c or to AFx?
We have a few backhauls we’re looking to upgrade, but on Solar/Battery, the average consumption is a concern.

ALSO, what is the radio output set to on this radio? There’s probably a big power draw difference at 7dBm vs 30dBm I would imagine. THANX!

Here is an AF5xHD at the same site for comparison. The AF5xHD consumes a bit more power on average but it isn’t a tremendous difference. The Pre-HD AF5x averages 12~13 watts consumption, but I don’t think I have any more out in the field to confirm.

I don’t see a tremendous difference in power consumption based on TX power on the Force 4xx radios. The first one I posted a graph for is running 5dBm TX power. The one below is running 22dBm:

I just opened a ticket for power usage spikes on 400c radios. It seems to cycle the heater every 3-5 minutes for about a minute. So normal usage is 6-8 watts then it spikes when I assume the heater turns on and goes to about 20 watts. None of our other Cambium gear does this except at boot up when cold, then they all settle down. Ubiquiti doesn’t have a heater at all.

So this power spike is by design? Is it necessary to run the heater even after the radio has booted? Why does the 400c do this but none of the other ePMP radios?

3 pictures attached showing usage on our Netonix for this 400c. The person handling my ticket does not seem to know about this “feature” yet

So this power spike is by design?

Yes, it’s by design and you are right that the heating is causing it. It depends on temperature how much power is required to keep the temperature at the required level.

Is it necessary to run the heater even after the radio has booted? Why does the 400c do this but none of the other ePMP radios?

The implementation of the heating is different for F400s then on previous generations os ePMP gear and that is rather advantage then disadvantage. The device controls self temperature all the time and is heated if needed.

@dcshobby what is the ambient temperature like when you see this happening?

Interesting. I wouldn’t expect the hardware to need to self-heat at temperatures like that. Temps here should dip into the low 20s tonight, I’ll keep an eye on a few 425s and see if they do the same.

I’m definitely seeing the higher power usage pattern mentioned by @dcshobby once the outside ambient temp drops below ~40 F. This seems like a fairly high temperature to be requiring an internal heater to cycle.

@Fedor is it possibly for the heater cycling to be calibrated down to a lower temperature? I don’t have any other radios that need to heat themselves above freezing.

Definitely does not need to run except for cold boot until about 20F and even then it should be on a pwm circuit to keep the power usage as low as possible while providing the heat needed.