Hi all, just looking for some feedback and experiences with the 450m 5GHz? How does it perform in busy/noisy 5GHz areas? Looking to deploy this in small town setting, potential subs anywhere from 200-400 subs.

So far we have been using them in multiples locations and anytime noise is present they really start to lose their appeal. In noise free areas we have some getting upto about 150mbps of throughput but most only get about 100mbps on a 20mhz channel

I appreciate you taking the time to respond. So your 450m 5GHz is only getting a total throughput of 100-150mbps of throughput? That definitely does not sound appealing at all especially at the price point of the 450m and SM radios… wow the cambium website definitely boasts a lot higher throughput on a 20mhz channel. I have deployed multiple ePMP 3000 and they are achieving 100-150mbps on a 20mhz channel… may hold off on the 450m lineup as of now. Again I appreciate your response.

Assuming that Branden is using a 20MHz channel, and he’s talking about per SM aggregate data rates, those are the speeds I’d expect. 150mbps aggregate on a 20MHz channel is the best you’ll ever see using a 450b HG SM. Most operators will start with a 450i 5GHz integrated AP (or 450m lite) and then when that fills up, migrate up to the full 450m w/MU-MIMO key. Where 450m really shines is when you need to pack a lot of clients onto the AP across the 90deg coverage area. 450m works best when the clients are physically spread out evenly throughout the 90deg coverage area. This also goes for the top talkers… you want them spread out as well. Assuming that you can meet these conditions, there are operators that can easily hit 200-300mbps aggregate throughput on a 450m 5GHz using a 20MHz channel. FYI, the 450m’s hard SM limit is 238… I haven’t actually seen an operator with this many SM’s on one AP though I do have some 450m’s with nearly 100 subs on them and there is still room to grow. That being said, in order to reach these high sub counts, you’ll need to have very high install criteria, probably keep your distances at 5mi or less, use all 450b’s, and again make sure clients and top talkers are spread out optimally.

Thank you for your response and your insight/advice. Cheers!

What’s the total throughput on the 450M’s you are seeing? We have APs with 50-100 clients but the 450M tops out at 100-115 total throughput at a time. Obviously MIMO A connections can drag this down, but even with clean spectrum we have never seen it exceed around 130Mbps.

Unfortunately, I don’t have a good example of the PMP450m 5GHz as we have very few deployed. I’m trying to get some figures and screen shots from a friend of mine that has lots of them. I can only give examples for 450m 3GHz CBRS. Here’s an example of an AP with 90 clients on it using a 30MHz channel width and getting peaks of nearly 400mbps on the downlink during peak hours. 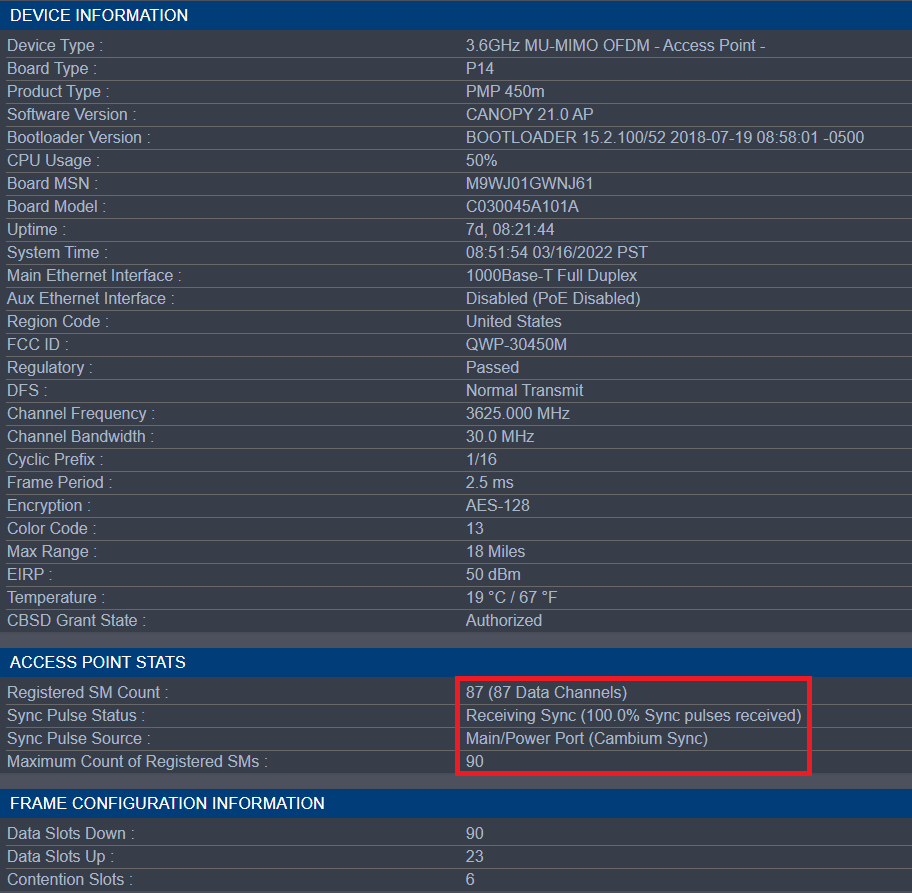 So here’s an example of a 450m 5GHz AP using a 20MHz channel with with 43 subs… although this is a worst case scenario IMHO as almost all of the clients are out past 5 miles and only about 1/3rd of the radios are 450b HG’s. ALSO, every MHz of the 5GHz spectrum is used at this site by 4 different WISP’s using a mix of UBNT LTU, AC, 450, etc. This is the only 20MHz chunk we could find to operate this 450m on. Seeing peaks of 160mbps on the downlink during peak hours. 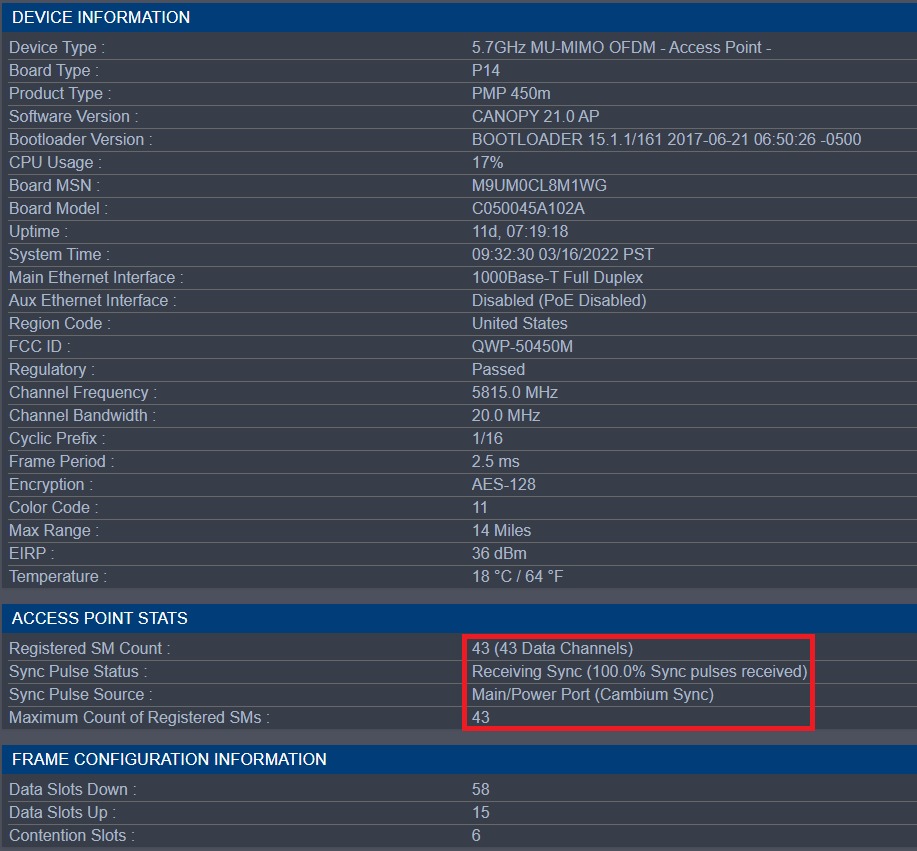 This is the highest traffic 20MHz Medusa in our network (~66 subs),

This is in a fairly rural area, with a mix of great signal subs and some with more marginal signals, either due to terrain, foliage, or distance, as well as competitors which keep us on our toes trying to find clean spectrum.

Those are some great results on your 3GHz 450m! Are those 90 SM fairly close or spread out for distances? Also, does the 450m 3GHz have sync built in or does one need cnpulse or a packetflux setup for it? If it is the latter, does one use the AUX port for the cnpulse/packetflux since poe cannot be used for 3ghz 450m? So I am guessing the best setup for a 450m 3ghz is 4pin power, fiber for data and a cat5e for cnpulse? Also what sizes of packages are offered?

They’re decently spread out… not as optimal as they could be, but a pretty good distribution throughout the 90deg coverage area. The vast majority are achieving 8X modulation on the downlink and uplink. 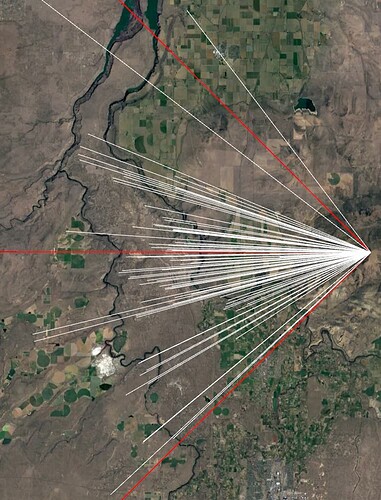 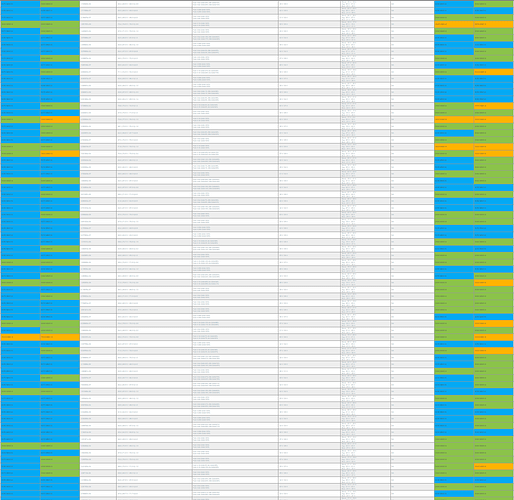 We feed the 450m’s a sync pulse via the ethernet port useing a Packetflux Rackinjector OR cnMatrix TX2000. If the 450m is in the middle of nowhere and by itself, then we don’t feed it any sync.

For 450m 3GHz you have to use the 4 pin power cable, but you can still use the copper ethernet port for data and sync injection. We only use fiber for those sites that have issues with copper (high powered FM collocated nearby and/or long distance runs).

Thats awesome, nice work! So if you were to offer higher packages, ie 75 or 100mbps download for clients, the 450m 3ghz would be the optimal choice from the Cambium lineup? So we are thinking of using the TX2K switch to deliver cnpulse… so would just need to run cat5e from “Main” rj45 port of 450m to a port on the switch, correct?

It really depends on your goals and how either lucky you are or how well you plan on the distribution of clients in the coverage area. PMP450i, PMP450m, e3k, cnWave… will all allow for 75 or 100mbps plans as long as you have very high installation standards. YMMV drastically depending on the mix of clients and how many of them want 75 or 100mbps plans and how often they use them and if the top talkers are optimally spread out or all bunched in a group.

In regards to cnMatrix… yes, you just run CAT5 from a cnMatrix PoE/sync port to the main data port on the 450m.

I’d like to share one of our 450m’s. It is running 30MHz, 5ms Frame period, 75% downlink, 8 contention slots. All subscribers are 450i sm’s within 2miles range (63 online at the time of the following screenshots). Theese are holidaycabins in the mountain here in norway, so I picked the busiest day from easter 2021. 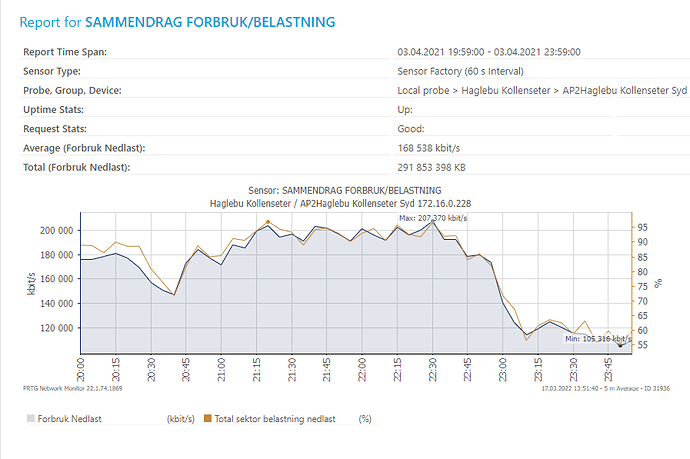 Theese are the modulations per sm (as we speak):

Just to mention - we have 12 450m’s deployed, all of them seem to give great results and throughput (espesially if we do as Eric Ozrelic is pointing out: “Having very high installation standards”). 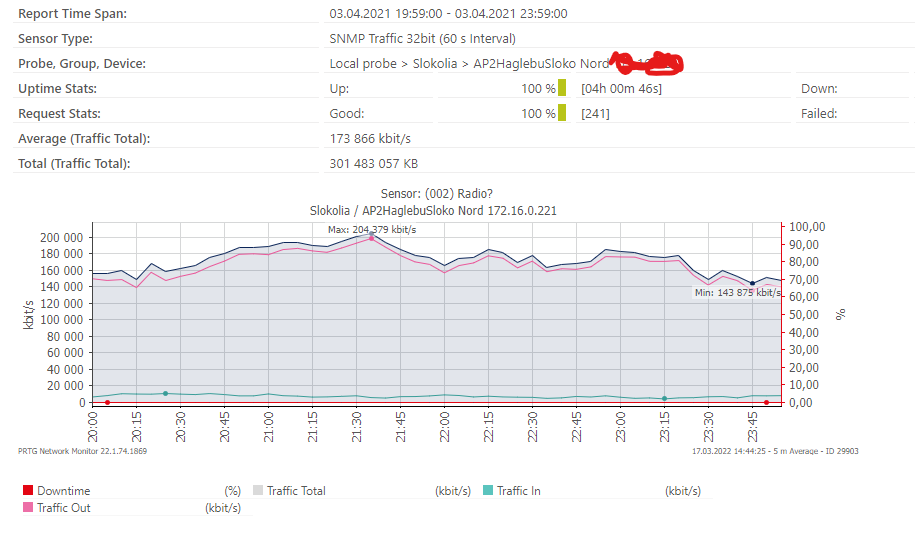 As you can see from theese two examples, expecting 200Mbps throughput (actual traffic - not just the built in flood test in the 450m) in the download direction (to the customer) is absolutely possible!

@rambern Are you running 21.0? If not I would recommend it as we made some improvements on 450m there that will especially help 30/40 MHz 5 ms frame.

But also during that time we’ve found we still need to make more improvements that will help 5.0 ms more. So as of right now we actually recommend to get highest performance to use 2.5 ms frame for 30 and 40 MHz channel bandwidth, if possible. Now sometimes you are co-locating with a 5 ms system so this is not possible.

We will be improving 5 ms even more in a future release.

What software are you using to create that model in the top picture?

The map with the white and red lines on it? That’s just google earth with the AP and SM’s GPS locations dumped from our CRM into a KML. The red lines I created using the ruler tool to give you an example of what a 90deg coverage area looks like.

Thank you sir. Was wondering if it was something in CNHeat V2.

Thanks for your reply and tips Charlie!

No - we are not running 21.0 yet. As mentioned in the post, theese are holidaycabins, and it is a pain to upgrade the system because quite a few of the subscribers disconnects the power when leaving, and some even only uses their cabins either in wintertime or summertime. We cannot run 2,5 ms frame, as we co-locate on every tower we are using 30MHz.

We try keeping up with the upgrades, so we will see if we get even better results with the 30MHz 5ms when we are on the 21.0 release (probably we will wait for the next release if there is expectations for even better 5 ms frame).

As mentioned in the post, theese are holidaycabins, and it is a pain to upgrade the system because quite a few of the subscribers disconnects the power when leaving, and some even only uses their cabins either in wintertime or summertime.

Ok if the SMs are on release 15.2 or later they will connect to the AP when they power on without issue. Then they can be upgraded then.

We cannot run 2,5 ms frame, as we co-locate on every tower we are using 30MHz.

Right, so then you’ll have to switch all APs to 2.5 ms frame at the same time because of course you want their frames to align not to self interfere. I meant co-locate with a LTE or WiMAX system that doesn’t have the 2.5 ms option.

(probably we will wait for the next release if there is expectations for even better 5 ms frame).

Work has not even started on this improvement as it is a lot of work and a compatibility issue, so I would not wait to upgrade out for this future release.

All that to say if it’s working and you and your customers are happy no need to mess with it either.