do a spectrum analysis from that particular SM instead of doing it from the AP. It is called a remote Timed Spectrum Analysis.

@Eric_Ozrelic my spectrum is not to bad… im average -87 in the channel I am in… the only other 3GHz is a competitor tower running LTE about 3 miles from our tower. Should I try a different LTE frame configuration? What data should I post on the forum to help find a solution?

If you can find out what settings your LTE competitor is using then you can use Cambium’s PMP LTE co-location Tool to find the proper sync settings.

If you can’t get those settings and/or trying different frame configurations doesn’t work then you may need to get as far channel-wise away from them as possible. Last resort would be moving to a different band altogether, like overlaying 5GHz on top of your 3GHz sector and converting those clients that have mystery issues with 3GHz over to 5GHz.

Thank you Eric… competitor is a Major Nation wide WISP so I doubt ill be getting any info. I will see what I can do… I do have the 3ghz medusa stacked with a ek3 5GHz… medusa is underneath the ek3, both at same heading.

Cambium provides many tools and statistics for troubleshooting and showing you where interference or issues are occuring. I’d suggest that you spend some time reading about them in the user guide. Here’s a short list of things I’d read up on and then try: 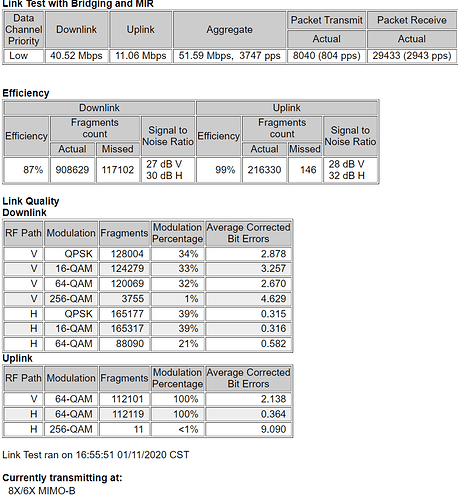 The MIR profile is set to 75 down and 10 up, based on the stats in these shots is 40mbps down what one should expect? 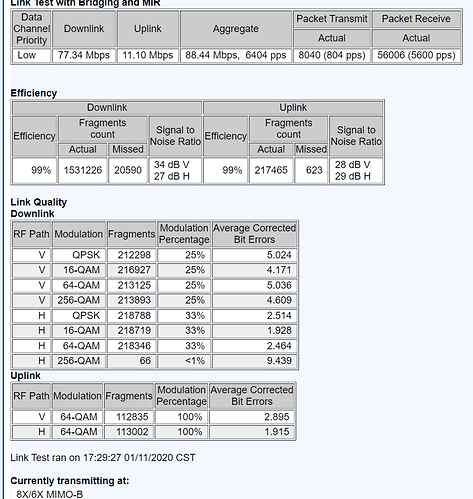 Are any of these nNLOS links? If some of these SM’s are nNLOS and/or experiencing intermittent noise from a nearby high power LTE transmitter, then yes, at 20MHz channel width, the speeds you’re seeing would not be out of the ordinary. At this point you might want to reach out to your RTM or raise a support ticket to review your settings and findings.

Thanks Eric… with these stats one would think 75mbps down could be achieved, no?..

Assuming 20MHz channel width or greater, using a 450b SM, then yes, I believe 75mbps down could be achieved.

On the AP, if you look under Session Status → Link Quality, what do the stats for the SM in question look like? Specifically, the Actual Average Rate vs. the Expected Rate?

Looks good to me! I really don’t understand why you’re not seeing higher speeds.

This is the next door neighbor…

Thank you for sharing, I appreciate it! So I was looking over some stuff and my setup is that the 450m 3GHz is powered by the PSU using the cambium 4 wire power cable, cat5e ran to the unit from a TX 2012 switch so it can receive sync. So I see that the poe port is sending 1.2w of power to the medusa… its set to 802.3 on the switch so is the 1.2w going to it the sync?