Alarms with AP down 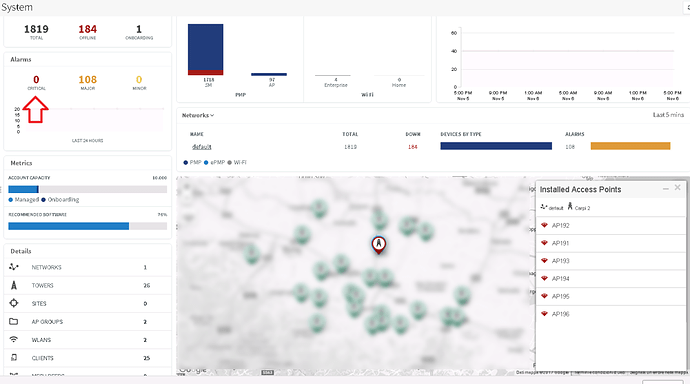 Currently the only critical alarm is for DFS for case: "Radio not in service for a minimum of 30 minutes due to DFS. Alternate channels are not available."

The current version of cnMaestro does not correlate alarm severity with device type.  Critical alarms indicate a system-wide problem.  An AP or PTP link going down would fall into this category.  However, SMs and WiFi devices would not.  In order to not polute the view with non-critical data Devices Down alarms are Major severity until we can assign differing severity for different device types.

We do assign a importance weight to alarms based on both severity and device type to give priority to infrastructure devices such as PTP and APs.  This is used to populate the "Recent Alarms" dashboard widget.  The down APs should be at the top of that list.  Scroll down in the view from your screenshot.

"Recent Alarms" is mislabeled currently and will be properly renamed to Top Alarms in the next release.

Hi Jordan, thank you for your reply. I haven't the full screenshot but now i have these "recent"alarms (201d, 187d...).  Are sorted  (without the possibility of ordering from the furthest to the nearest... (i want to clear them and there is an open topic http://community.cambiumnetworks.com/t5/cnMaestro/How-to-reset-Major-Alarm/m-p/79108#M2466 )

Ok, an SM that go down isn't critical but, i think, that an AP down is important and critical

This is the reason I requested re-scaling the graphs.  "Devices by Type" is scaled to the SM column.  Each column should stand alone.  No need to scale APs against SMs.  Anybody have more APs than SMs?  Would it matter?  At a minimum, the columns should be labeled with total count, as they currently are, but also labeled with number down.  I realize the coulumns are shaded to indicate this, but scaling makes it extremely dificult, if not impossible, to discern.

You are doing great work on this tool!  Just need to make some "user friendly" tweaks.

Hi Tuvix_IT.  The "Recent Alarms" (Top Alarms) widget only shows the top six alarms based on a combination of alarm severity and device type.  Are the AP down alarms not appearing here before SM down alarms?

Differentiating alarm severity based on device type is entered into our tracker and is being considered for a future release.  Thank you for your feedback.

Thanks for the feeback Luis.  I've forwarded your comments to our UX developer to take as input.