All CPE on 3000AP have 10dBm+ chain imbalance - how to troubleshoot

Of course this radio/antenna are mounted in such a way that makes it very very difficult to work on… replacing the radio or the sector is going to be a huge pain… so looking for some input on the fastest / best / easiest way to determine if the problem is the Sector, the Radio or pigtails / connections.

All the CPE’s seem to work ok but all of them get dropped / reconnect every 2 to 3 hours (and not always all of them but normally, they drop in groups).

We installed 2 x 3000 AP’s / Sectors to split/replace a 120° 2000 AP. There was no notable chain imbalance on these radios when they were connected to the 2000AP and if I force them to connect to the other 3000 sector there is no notable imbalance.

Every single CPE has at least 10dBm imbalance.

Not claiming this is a solution, but I saw something very similar a few weeks ago, turned out one of the newly-installed CBRS PMP450M sectors was partially blocking the 3000 sector, when we corrected that things were more balanced.

It’s interesting that two of them are “backwards” from the rest. The connectorized ePMP1000 could have crossed wires, but the Force200, unless mounted wrong, I would expect to somewhat match its brethren.

Check the geometry, see if the balanced SM is geographically near or apart from others. If apart then look for physical interference like we had, which could impact clients more in one direction, or closer, or more distant.

I hate to say so, but I suspect there’s some climbing ahead… If everything looks good re physical interference, I’d plan to replace AP and sector antenna, then try to diagnose on a workbench instead of a tower.

I think you are right, I’ll just set up another sector/radio to swap and figure it out on the ground

nothing in/near the face of the antenna.

I mapped them out, getting fresh numbers straight from the radios and … The F300-25’s have swapped.
Both the F300-25’s are now reversed from what they where while the two F200 and connectorized 1000 are unchanged.

The connectorized is on a Ubiquiti dish which is supposedly the opposite pols of cambium so may be something to why it is backwards but the other one is a F200 and the radio I added that’s in the overlap of the two sectors is an F180 and also backwards ( when connected to this sector).

I mapped them out wondering if some pattern would appear but I don’t see it. I was also hoping maybe it would give me a little bit more insight on how the 4 x 4 works vs 2 x 2 clients… It did not. Yellow is F300-25, Purple F200, White is the Connectorized 1000 and Green is a radio in the overlap of the two 3000’s with RSSI on each sector (you can tell which is which by the chain imbalance)

Most of the very close radios are not LOS but their chain imbalance was only a couple of dBm on the 2000 sector. 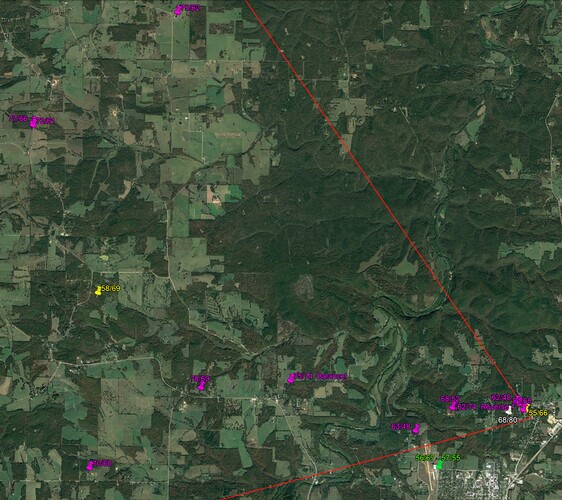 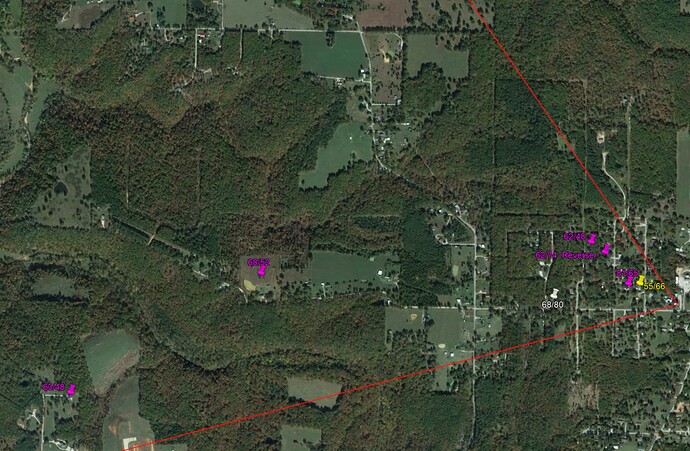 Looks like your SM antennas are rotated on their horizontal axis.

You could have a jumper thats of poor quality or it could be the radio itself, rarely its the antenna. If your not using a 4-port antenna then dont forget to set the radio to sector split. This changes the radio a bit and has helped us with a similar issue.

Hah well brought the whole thing down and replaced with a new 3000 sector/radio no longer any notable imbalance and of course it was the lower RSSI everything ended up on ( so a -60/-40 ended up being -60/-60 etc…) which is a few dBm more than they had on the 2000 sector.

It will be a while before I have time to test this thing and figure out if the problem was sector, pigtails or radio but the fact that all the SM’s were seeing way more power on one chain than they should have makes me think it’s going to be the radio (putting out more power than it is supposed to ?)

possibly, but more likely a transmit phase issue or a failing antenna/pigtail. Cambium has made sure that our power out on the connector is as the webpage states. This isnt like the old Canopy days where a new slicing value could be calculated and then used and the radio wouldnt have a clue.

I had a similar issue and it happened to be a faulty antenna corroded by sea salt.

Mostly just for anyone interested it was the radio.

We had taken that sector/radio down and it’s just been laying here in my shop. Today I took the radio off the sector and put it on a brand new sector/pigtails and we installed in on another tower in a another city and it has the exact same problem, every customer radio as 10+dBm chain imbalance with one chain being 10+dBm higher than it should be.

Any ideas on what the radio could be doing to make all its subscribers think they are seeing the signal 10dBm stronger than possible other than actually transmitting one chain with 10dBm more power than it should ?

Did you just reconfigure or did you factory reset the radio first?