This makes me so happy! I think… Anyone used/using them ? I don’t think I have ever used an Alpha Wireless sector but the name is familiar, like maybe some of the antennas I have used were actually made by Alpha Wireless and branded by someone else (KPP maybe ? or maybe Last Mile Gear?)

I would also like to know if you could use the Beamforming Smart Antennas with this sector.

I ordered a couple and got them in today. Was surprised by how light they were. I like light, I love light, but my first thought was remembering how light the IT-Elite sectors were and how much I really liked that until I discovered they they had the same front-to-back ratio as an Omni… Guess I’ll find out when we get them on a tower.

There is on real big negative. The radios bolt to a bar and that bar bolts to the sector. You can not replace one radio without removing both… that’s really bad design IMHO and we will probably end up mounting the radios on the pole/mast which doesn’t look nearly as nice/clean.

It uses threaded rods instead of instead of bolts, not a fan of that. The shroud over the top of the radios is held on by four very small bolts complete with flat washers and lock washers… tiny little stainless steel bolts and washers are the best when you’re wearing gloves and hanging a few hundred feet in the air. 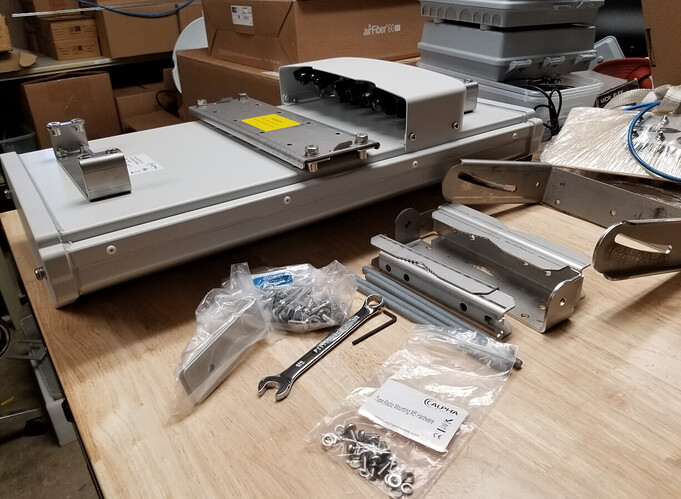 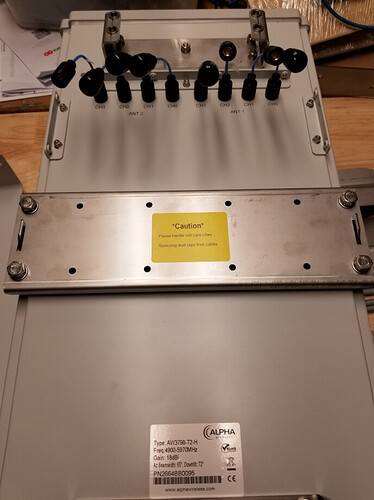 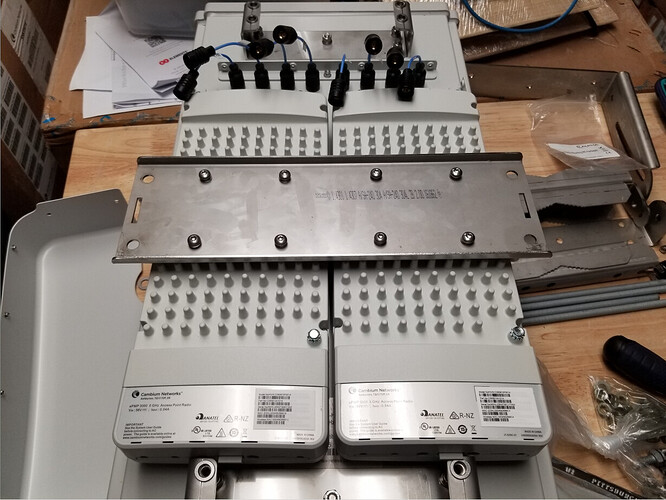 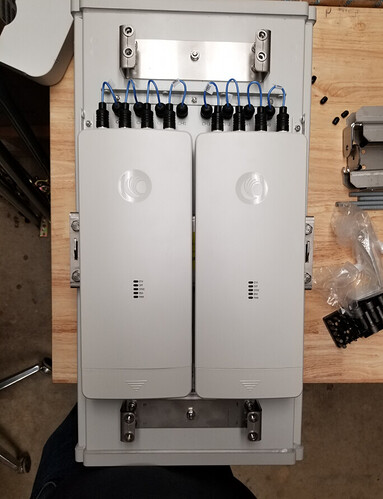 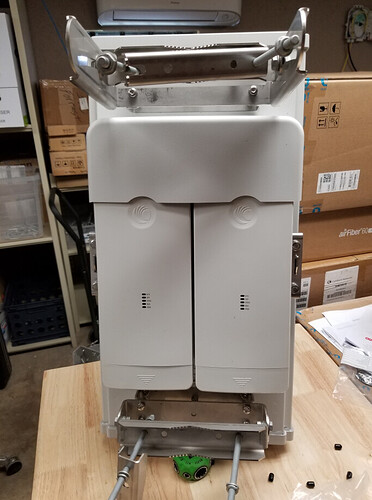 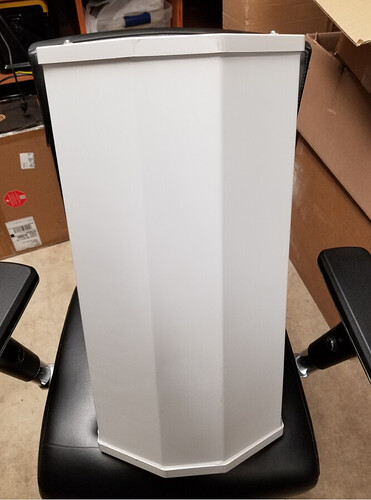 Looking forward to hearing about performance. Please keep us posted. I have a tower I would like to install these, but I am concerned with interference.

Let us know how they work out!

Got this up a few days ago but haven’t had a chance to do much testing. We installed it directly underneath the 120° 2000AP it is replacing. Right now I have the 2 new 3000APs running DFS channels (until I can do some work out some channel planning on this very crowded tower) and the 2000AP was using a non-dfs so the AP and the CPEs could use a lot more power (A LOT more for the CPE’s since they also got bonus power for being PTP in non-dfs but not in DFS).

Anyway, in the wee hours some morning I plan to set the new AP to the same channel the old 2000 was using so I can get a direct comparison of SNR between the two. But for now, I have to say I have been presently surprised at how good the Downlink DFS SNR is on not only these new sectors but also the Cambium 3K sectors. Losing the extra PTP power though is a problem (even on the 3K sectors with beam smart panels or whatever it’s called).

MU - it seems to work ! Maybe ! How well I’m not real sure how to test (is it “works or it don’t” kind of thing or could it be “works, but not very well”) . The 2000 it is replacing only had 4 AC customers on it and all 4 of them were about 2 miles out and pretty much within a few thousand feet of each other so I wasn’t surprised when none of them showed groupable.

However I was able to move 6 ac radios over to it from the 3k sector next to it and it does show “groupable SMs”. I ran several " Dual SM" link tests from the AP to grouped SM’s and the results were pretty much all over the place but then all these AC radios are not ideal RSSI since this sector doesn’t really point at them.

The two radios shown in dual SM test hit about 103Mbps down / 24Mbps up when tested separately so I’m not sure MU is actually doing anything here… also, for Dual tests I picked radios that showed groupable to each other and those two are the best RSSI of the bunch while also being groupable to each other. First SM is .4 miles az 46° and 2nd radio is 2.4 miles az 30° . 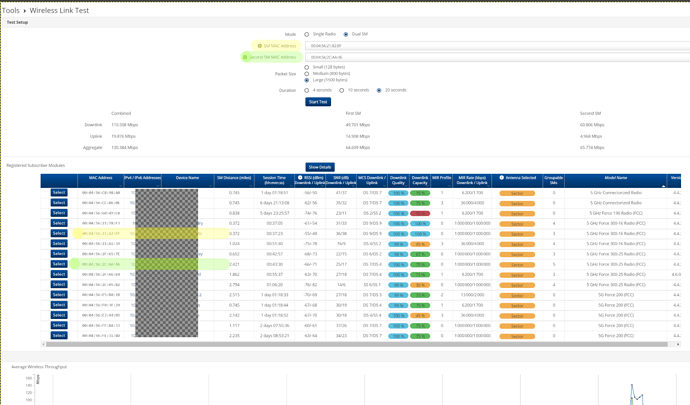 I may stick a “smart antenna” on one of them the next time we go up the tower , for science.

I’m going to directly replace a 3k sector with one of these in the not-to-distant future (with smart antenna) so will get an apple to apple comparison hopefully.

Oh yeah about front to back…

I don’t really know yet. I thought that since I have an AC AP directly behind this new sector and the 2000 Sector that I would just run the nifty SA on it and compare how well it could see the Cambium 2k sector/ap vs this 3k sector/ap.

However after leaving the SA running all night long it had not found a single one of the AP’s on the tower with it … oh it showed what I am sure are the other AP’s on the color RF graph but as far as identifying any of them it had not (a problem I have seen repeatedly running SA on other AC radios… half the time the CPE can’t even ID it’s own AP after running for hours).

So, since ePMP doesn’t have a WiFi/AP site survey and it has a mostly broken SA, I got frustrated and moved on to other things. I’ll revisit this when I move the AP’s out of DFS channels.

from the 3k sector next to it and it does show “groupable SMs”.

It seems like it’s doing OK with grouping. Looks like there are 7 Force 300’s connected, and several of them were able to group with 3-4-5 other of the F300’s, which is good.

I find it difficult to really test the MU-MIMO when you’ve got N gear and QOS in the mix too. I find it basically needs to be wide open and really pushed to the max before it does much MU-MIMO. I do see that the two SM’s you’re testing with are both QOS 0 and so as long as they are grouping partners with each other, that should get some MU-MIMO going.

As far as I know, the MU-MIMO is always trying to figure what is the fastest/best way… and if it figures it can easily handle the data requirements as SU, then that’s what it’ll do. I’ve also heard Cambium refer to it as “getting warmed up” I think, so there’s some learning or training going on. Personally I’ve set 3000’s down to 20 Mhz and tested a bunch of times, and the MU-MIMO get’s better and better the more tests I run, and is much more likely to kick in at 20 Mhz, because it’s twice as likely to ‘need to’ than a 40 Mhz mode AP is. I’ve also set AP’s to 50/50 rather than 75/25 just to test - and again, it’s much more likely for MU-MIMO to kick in on a 50/50 AP because it’s got less SU-MIMO capacity and it ‘needs to’ sooner. At least, that’s the way I think it goes.

Anyway – this thread is about those antennas – they look interesting, and it’d be great to hear how your testing is going, and if fw 4.7 is working out even better?