While the peak bandwidth of a single video stream may appear modest, it is the need to sustain multiple streams for an extended time that creates a high load on the access network during the busy hour. Access networks that are unable to accommodate the traffic load introduce excessive packet latencies or even packet loss resulting in a degraded end user experience and, in the extreme, lost customers for the internet service provider.

For years, starting with telephony, service providers using contended access systems have exploited oversubscription. This has been a very cost effective solution for internet service providers with end users engaging in activities such as web browsing, gaming or interacting on social media due to the high peak to average traffic rates and short peak duration associated with individual users. In contrast most video traffic does not benefit from high peak to average rates and long duration video sessions are becoming common place. Some service providers will find they need to change their existing oversubscription models for video delivery.

To help PMP450 customers deliver more data traffic in the same radio spectrum, cnMedusa technology adds downlink spatial division multiple access (SDMA) to the PMP450 family. Also known as mumimo or spatial multiplexing, under the right conditions, SDMA may increase the aggregate sector capacity of a PMP450 sector by a factor of three by replacing the PMP450 or PMP450i AP with a PMP450m. This is achieved without touching SMs or changing the network frequencies.

The ability of cnMedusa technology to increase sector capacity is shown by the following analysis of data captured from a PMP450m. This was operating in a customer sector in the USA where the PMP450m had replaced two PMP450 APs. The data was captured during the evening of Thursday, 28 September 2016. The sector was operating in a 20 MHz channel with more than 100 registered VCs. The end users were mainly residential subscribers.

The sector was configured with a duty cycle that resulted in a maximum of 50 downlink slots and 16 uplink slots per 2.5 ms TDD cycle. A multi VC link test run in the maintenance window reported throughputs of around 150 Mbps and 45 Mbps for mumimo enabled and disabled respectively.

The analysis used raw data detailing the fragments transmitted and acknowledged in each direction for each TDD cycle in a 50 s interval. This data was captured using a PC collecting development debug traffic emitted from the auxiliary Ethernet port of the cnMedusa.

The figures each show two plots with the upper plot applying to the downlink and the lower plot to the uplink. The first figure shows the acknowledged data rate (green trace) and scheduled slots per TDD (cyan trace) versus VC after sorting the VCs by descending downlink slot usage. Cumulative versions of these two traces are shown by the red and blue traces respectively.

The upper plot of the first figure shows that the delivered data rate and slot utilisation to the 8 dominant VCs was ~50 Mbps and ~70 slots per TDD averaged over the 50 s analysis interval. For all VCs, the aggregate delivered rate was 114.3 Mbps with an aggregate 151.5 scheduled slots per TDD. Comparing with the multi VC link test result with mumimo disabled, this is indicating a delivered data rate increase of approximately 2.5

The lower plot of the first figure shows an aggregate rate for the uplink of 7.6 Mbps. This reflects the downlink dominated asymmetry of the traffic during the analysis interval. 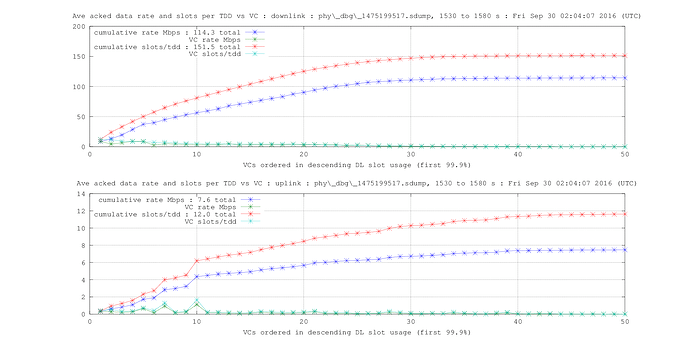 The following figure shows the distribution of slots scheduled per TDD versus VC. Again the VCs are sorted in order of descending slot utilisation.

In the top plot, brown bars show the proportion of scheduled slots associated with VCs being scheduled to send 42 to 50 slots per TDD cycle. The preponderance of brown bars is indicative that the downlink queue associated with the VC is not emptied by the scheduling event. This is the nature of SDMA. SDMA can only be exploited when data for spatially diverse endpoints can be scheduled using the same time/frequency resource blocks. (note, there is a bug in the script used to generate the legend where two traces refer to the same slot counts)

In contrast to the downlink, the lower plot which refers to the uplink, shows most VCs are scheduled with a small proportion of the maximum of 16 uplink slots per TDD. The uplink scheduling behaviour indicates short uplink queue depths.

On average, the greater the number of end points that have queued data the greater the spatial multiplexing gain. As the downlink traffic load on a sector increases due to new users so does the total average queue depth. This in turn increases the average spatial multiplexing gain because of the increased number of end points with queued data allowing the new load to be sustained at the higher queue depth.

The assumed explanation for the brown bars in the top plot is the presence of one or more TCP sessions associated with the respective VC with the short queue depths for the uplink suggesting the uplink is not limiting the delivered data rate. 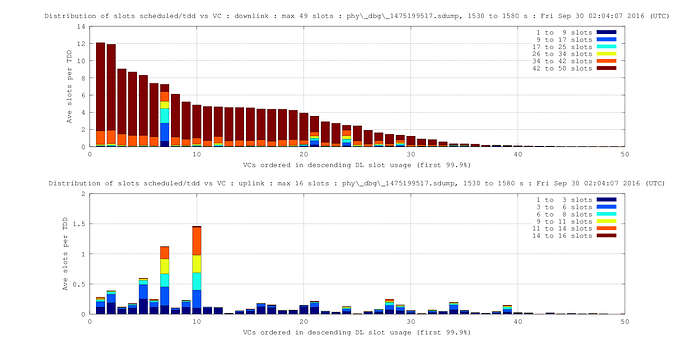 fig40.png1998×1023 115 KB
In summary, PMP450m using cnMedusa technology is one of the options available to PMP450 users to increase delivered data rates. It works particularly well for sectors suffering from congestion due to streamed media delivered to many end points. The analysis presented above provides some insight as to how cnMedusa provided a significant capacity increase on a live customer sector.
5 Likes
Spatial azimuths?