Not only is the u-bolt mechanism difficult to assemble when hanging on a tower - it's too big for a very common Laird J-mount.  One can barely get the mount tight enough on one of these to keep the dish from flopping around. 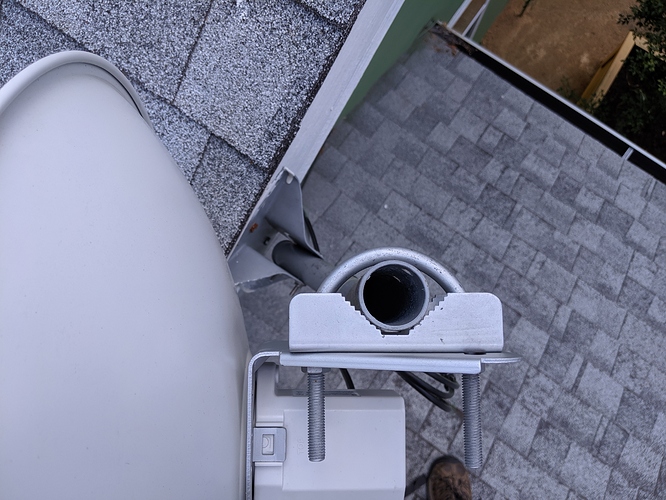 We absolutely hate this bracket. Our F200’s mounted in trees are on 1.25" masts. When replacing with F300 we now have to cut a 1.5" section of mast to slide over the 1.25" mast (secured with bolts) for the F300 to mount to. Not to mention sometimes we are hanging 80-90 feet in a pine tree ( tree climbing gear) doing this plus fighting with the already very crappy mount on the F300. Cambium made a great product with a horrible mount…and that is being nice about it. I say a lot worse while in the field dealing with these mounts.

My installers come back to me with the same complaints. Unsure why they didn't stick with the tried and true.

Thank you for the feedback. I have sent this to our product design team.

My installers come back to me with the same complaints. Unsure why they didn't stick with the tried and true.

The mount on the Force 300-25 is a lot simpler, and I'm guessing cheaper to make, than what's on the Force 200. It kind of baffles me that they went with such a large u-bolt on something that's main purpose is going to be a CPE, but I'm guessing they were trying to make it work on a wider range of mounts (the Force 200 mount was too small for a lot of tower-type applications).

That type of mount is perfectly fine for mounting on a J-arm, in my opinion, which is probably how the vast majority of these things will be mounted... but it would've been better to go with a smaller u-bolt that would fit a standard j-arm better and it also should've been made so it could flip over, which would've only needed a minor change. It's also annoying that the nuts aren't 13mm, like almost everything else we use (including the 200).

So, yeah, the Force 200 mount is better, but I can live with what's on the 300 if it shaved a couple bucks off of the price, and assembly is quicker too.

While I'm complaining about things, I might as well mention that the extra cardboard from being packed as singles instead of 4-packs is annoying too...

The Force 300-25 mount is such a downgrade from the Force 200.  Not only is it non-reversable and have too large of U-bolt, you can't aim the dish horizontally, tighten, aim vertically, tighten and repeat to get the best aim possible.

I see where you are coming from but I would be willing to pay extra $ for a different mount. You can aim a F200 with one hand, every time, all day long while the F300 (and the the even worse F110) requires both hands on the dish to prevent it from moving in one axis while you adjust the other axis... this is a huge difference in my book and one that matters when the installer is juggling a dish, a wrench, a phone/pda, and trying to keep sweat out of their eyes all while trying to not fall/slide off of whatever they are mounting it on.

"It's also annoying that the nuts aren't 13mm"

And sooo much black ink we are all paying for ! As much ink and cardboard as they wasting maybe if they was 4 to a plain brown box we could save enough $$ to have a better bracket !?

Thank you. I have passed this to the development team.