cnMaestro 3.0.0 On-Premises is distributed as an OVA file, which can be installed as a new Virtual Machine or used to update an existing installation running cnMaestro 2.4.0/2.4.1/2.5.0.

This update has significant database changes that require data migration. This process is done in the background, so regular network management operations are not impacted. The migration duration depends on the total number of devices, and it may take a couple of hours. We recommend limiting UI access during this period, to keep the load down. Devices will otherwise reconnect as normal.

If you are using CBRS with cnMaestro acting as an HTTP Proxy, we strongly recommend configuring an external HTTP Proxy before updating to 3.0.0.

cnMaestro 3.0.0 supports two variants enabled in Cloud but not yet enforced in On-Premises:

This unlicensed, free version of cnMaestro delivers the same experience as the previous cnMaestro, but without the Pro features.

) in previous releases have been relabeled to X (

Please refer to the following videos for more details about cnMaestro X: 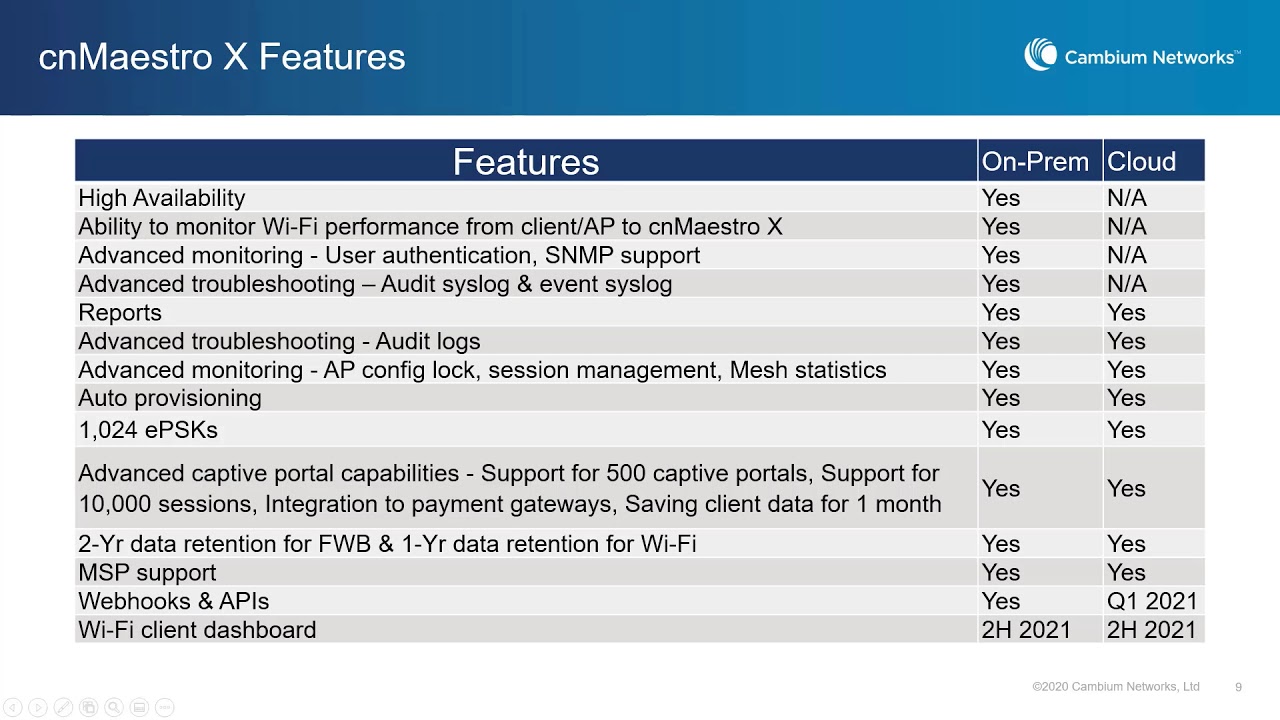 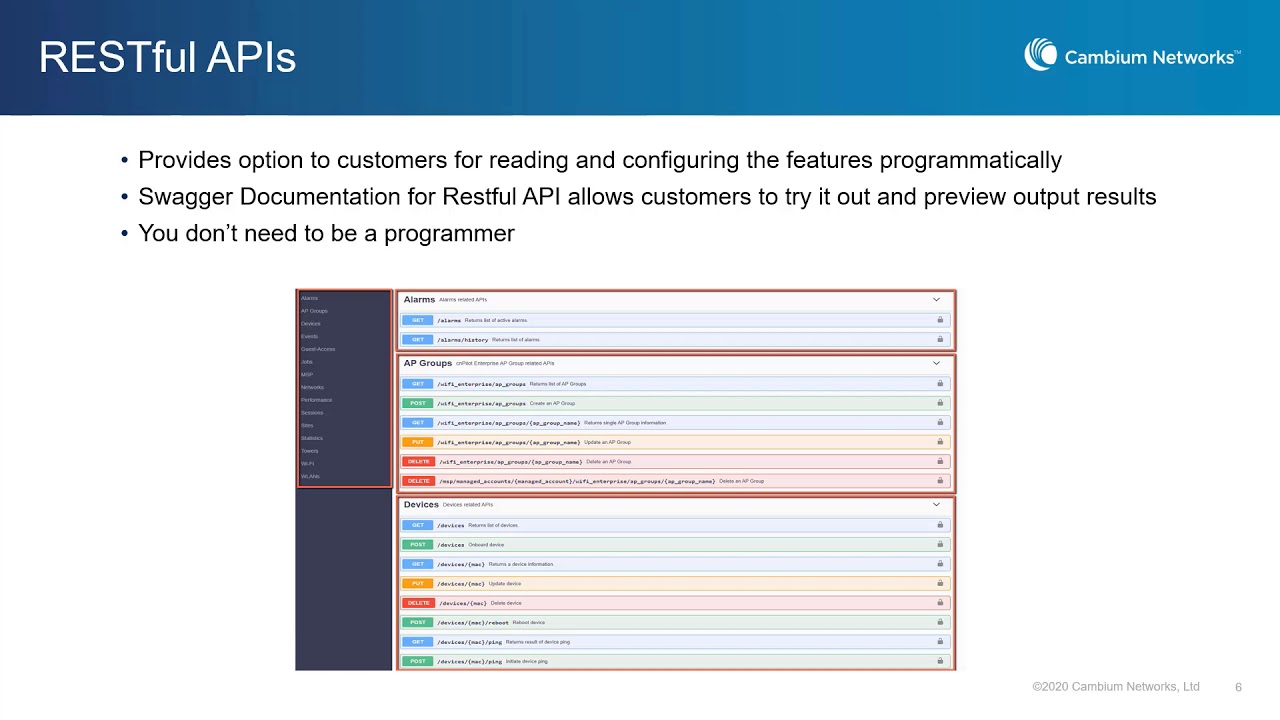 If you are using cnMaestro X features, it is strongly recommended to create a Cloud Anchor account and connect On-Premises instances to it.

The graphic below displays the Cloud Connectivity page in cnMaestro On-Premises. 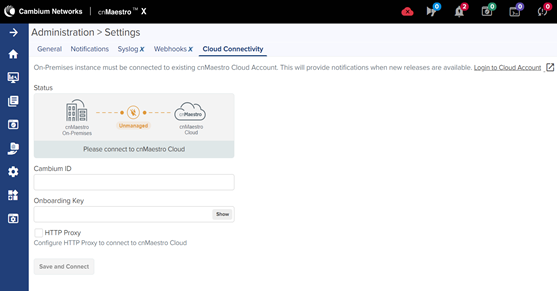 The Cloud Anchor Account requires an Onboarding Key to establish the initial connection. 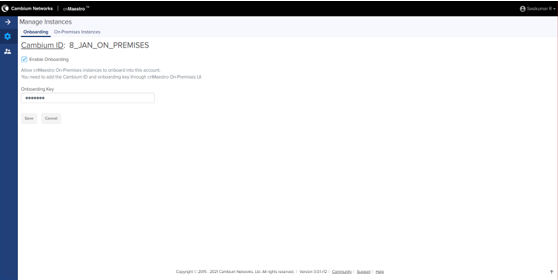 The cnWave Terragraph infrastructure supports E2E (End-to-End) Controllers, which exist as External Applications (downloaded from Cambium and installed in a VMware Virtual Machine) or integrated into cnWave Devices (termed as Onboard Controller).

The External E2E Controller discover cnMaestro after it is configured. The graphic below displays the Network E2E Network Dashboard in cnMaestro.

The Onboard E2E controller is hosted on a 60 GHz cnWave device running version 1.0.1-beta5 or later. The E2E Network Dashboard for an Onboard Controller is presented below.

The section highlights the main features of the 60 GHz cnWave integration.

All device performance charts are enhanced for long term historical data support. Along with the existing 5-minute and 1-hour periods, a new 1-day period is added. The 1-day period will only be available in cnMaestro X accounts. 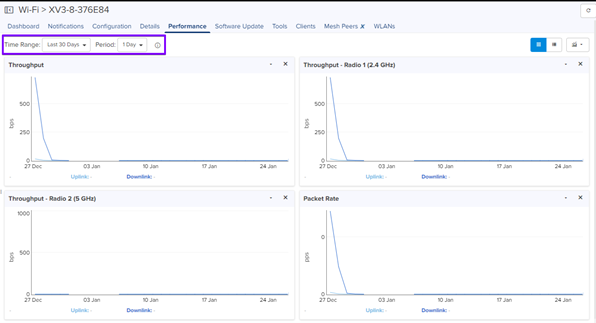 Support for concurrent device jobs is added: Software Update, Configuration Update, and Action Jobs can be executed concurrently on a distinct set of devices. 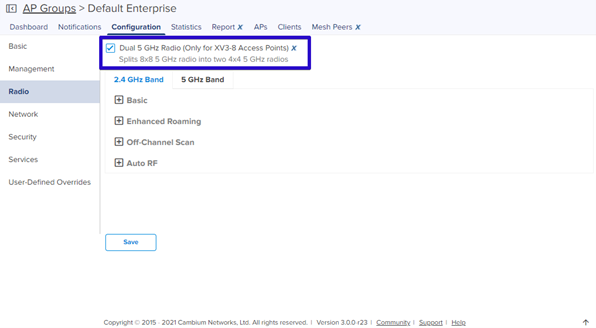 User can now configure the NTP server settings from the cnMaestro GUI by navigating to Administration > Server > Settings and the Configure NTP Server section. cnMaestro uses Google and NIST Public NTP by default. To use different NTP servers, configure IPv4/IPv6 address or hostname.

The Home page is updated to provide a fresh look and overall summary of the deployment. 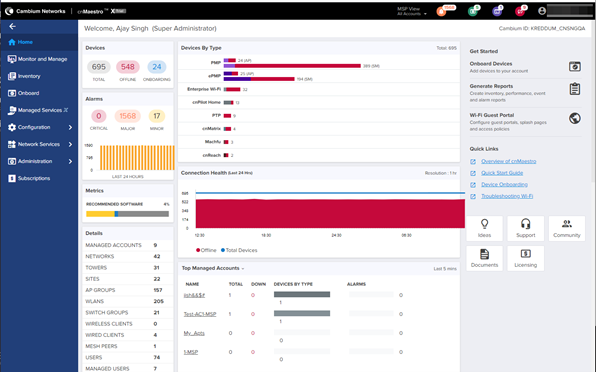 The cnPilot E-Series and XV-Series APs are combined into one category called Enterprise Wi-Fi. The end-of-life (EoL) ePMP 1000 Hotspot is also included under Enterprise Wi-Fi AP Groups and WLANs. 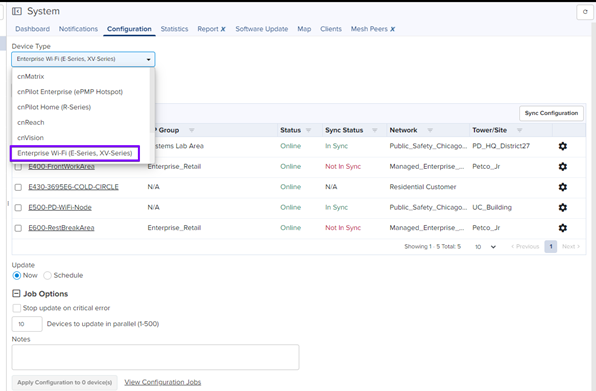 The updates are also present in AP Group creation. 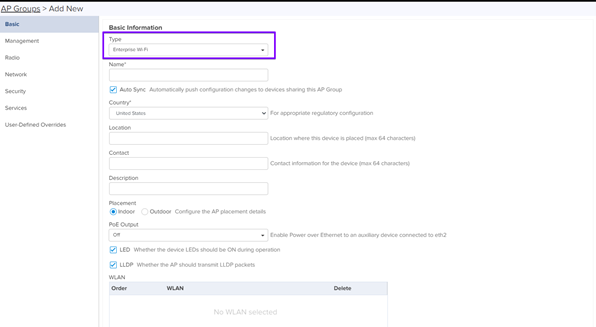 Most icons are updated, and Main Menu text is renamed as shown below:

Important: API Version Update to v2
The cnMaestro API version is now “v2”. The “v1” version will remain through 3.1.x and will sunset in 3.2.0, where it will no longer be supported. Most API calls are unchanged in v2, but there are revisions in few areas – especially devices and statistics. See the User Guide and online Swagger documentation for specific changes.

Cambium recommends updating to v2 as soon as possible.

There are several places to get help with cnMaestro:

On-Premises Quick Start Guide : This guide walks you through the initial management process and allows you to get onboarded quickly. It is embedded into the cnMaestro image and can be accessed on the Home Page of the UI. It can also be downloaded in PDF format from the Cambium Support website.

cnMaestro 3.0.0 On-Premises is distributed as an OVA file, which can be installed as a new
Virtual Machine or used to update an existing installation running cnMaestro 2.4.0/2.4.1/2.5.0.

I prefer to create a new vm with the ova instead of upgrade and import the data from the old version. In case of error, can return to the old vm easily.

Thanks. I was able to upgrade successfully without spinning a new instance.