Important: Web Browser
Restart your browser (or clear the browser cache with a hard reload) if you are having UI problems with the 3.0.4 version.

The cnMaestro RESTful API is now supported for Cloud customers with a cnMaestro X account. The API allows customers to read data and perform operations programmatically using their client applications. The API is supported over HTTPS, and messages are exchanged in JSON format. Modern programming languages have rich support for RESTful interfaces.

The External E2E Controller is onboarded to cnMaestro and is presented as an E2E Network. The graphic below displays the E2E Network Dashboard in cnMaestro.

The Onboard E2E controller is hosted on a 60 GHz cnWave device running version 1.0.1-beta5 or later. The E2E Network Dashboard for an Onboard E2E Controller is presented below.

This section highlights the key features of the 60 GHz cnWave integration.

The following updates have been made to Acknowledged Alarms:

Sorting and filtering support are also added for the Acknowledge column.

The following are significant updates to Maps: 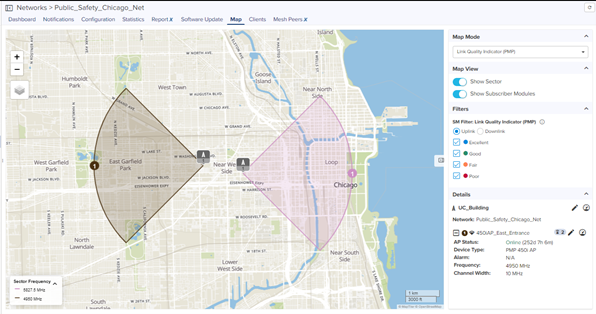 There are several places to get help with cnMaestro.

On-Premises Quick Start Guide : This guide walks you through the initial management process and allows you to get onboard quickly. It is embedded into the cnMaestro image and can be accessed on the Home Page of the UI. It can also be downloaded in PDF format from the Cambium Support website.

Oh man can’t wait to try RESTful API during the week.
Hopefully we can interact with PPSK’s via the API.

Well good news . RESTful API works decently, haven’t picked up any issues yet.
Can create EPSK’s from PostMan/Ansible though still looking for a way on how to generate QR codes from the dynamically generated passwords and deliver them to user emails.