Hi.  Is there a way to rename the 'default' network name?  I know I can create other networks with other names, but the main one (default) I can't find how to rename that?

I've asked for this too, and I believe I've told they're working on making this editable.

If you haven't looked already, check out the Ideas area of the forum, and add this as a request to get the cnMaestro dev's attention... I'll be sure to up-vote it too!

OK.  I've added this into the 'Ideas' area. If you want this idea to be implemented, click here and Vote/Kudo it up!

Ticket has been raised for it.

Thank you for your attention.

Hi.  On my cnMaestro Dashboard, I used to see the SM's ''Usage'' totals on a Monthly graph - and now they show 'Current Weekely Usage' only...   I can't find where I switched that, or how to switch it back... 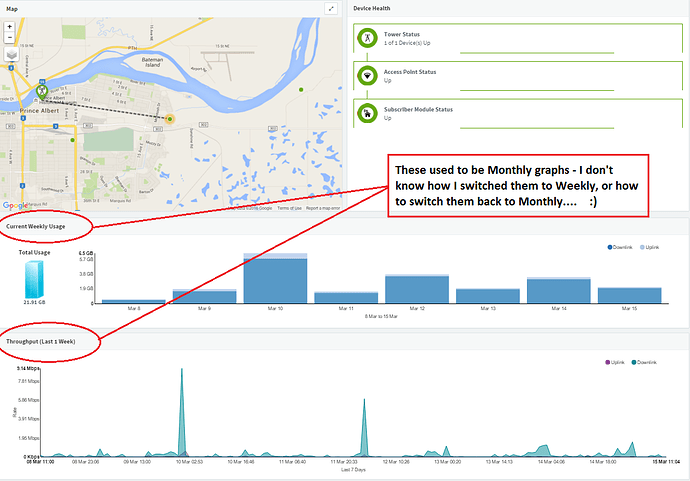 Bump...     in cnMaestro, I'm pretty sure that I used to see the SM's ''Usage'' totals on a Monthly graph.  Now it's a 'Current Weekely Usage' graph. I  don't know how/where I switched that, or how/where to switch it back. Help please.  :)

Hi.  I received a reply in a different forum that said they (Cambium) have reduced it to daily/weekly now. Also, the 'weekly' is only 1/2 hour averages too, so all the 5 minute details are gone except for today. I mean, there isn't a way to look at the previous days this week, and to 'zoom in' and to see the 5 minute details for what happened a couple days ago.

So, if a client calls and said 'its been slow for the last couple weeks' (which is a pretty typical type of call) cnMaestro is essentially useless now as a diagnostic tool for that kind of problem now. With the monthly graphs, we used to be able to see 'at a glance' what their montly usage total was and on what days - so telling a customer within a few seconds of them calling in that ''OK, I see that you've used 283 GigaBytes in the last month'' or ''I see that you transferred 18 GigaBytes last Thursday' - that is always a great way to know that their connection isn't always fundamentially broken, and that it's more likely that they've got downloads/uploads going on that they are simply unaware of (Cloud/Torrent/etc).

So - for our graphing needs, we'll have to continue with CACTI and PRTG for now it seems.  In those, we can choose to keep 2,016 data points for the last week - or 8,760 data points for the last month, and we can always zoom in and see those graphs with whatever granularity we choose to. Those graphing packages also allow the 'weekly' graph to be 7 days, or 8, or 10 days if we choose to store more 'weekly' data - and our 'yearly' graphs can be 16 months if we want to spend the resources on the data requirements for that.  It'd be awesome to have some of that funcionaliy in cnMaestro, and not to have it reduced from monthly down to weekly - and not to have the granularity reduced - even from YESTERDAY!  ;)