This article describes the configuration management system in 60 GHz cnWave.

CnWave implements a centralized configuration management architecture. The E2E controller serves as the point of truth for all node configurations, and is responsible for keeping all nodes’ local copies in sync with its own view. All config changes are applied using the controller.

The automatic config sync can be disabled by “un-managing” the network or specific nodes via a special configuration field “E2E Managed Config” . This may be needed temporarily for testing purposes

The controller contains an optional scheduling algorithm, to roll out configuration changes that affect multiple nodes in batches (e.g. when changing network level settings). This protects against network-wide service disruption and network isolation, but will delay the propagation of configuration changes.

To enable this staging algorithm, set the config_staged_rollout_enabled flag on the controller; by default, all config updates to nodes are sent simultaneously.

Settings under Network apply to all the nodes in the network. Some apply to the E2E Controller 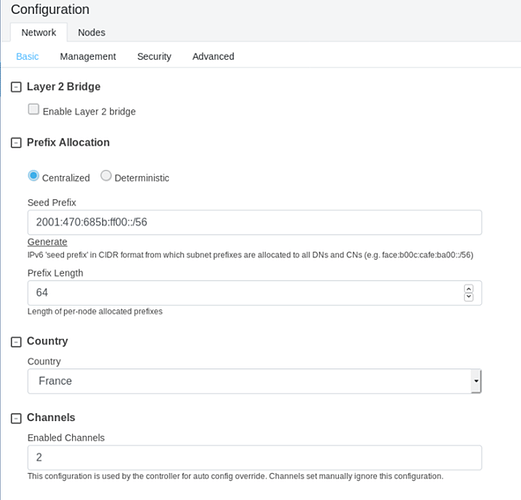 By default, cnWave is a IPv6 only network. By selecting this checkbox, you will be enabling Layer 2 network bridging (via automatically created tunnels) across all nodes connected to a PoP. This will facilitate bridging of IPv4 traffic across the wireless networks. Release 1.0 supports Layer 2 bridge in single PoP deployments only. Future releases will support in multi PoP deployments.

CnWave networks are given an IPv6 “seed prefix” (e.g. face:b00c:cafe:ba00::/56 ) from which subnet prefixes are allocated to all DNs and CNs. There are two methods for allocating node prefixes with Open/R

Deterministic - Deterministic prefix allocation is also handled by the E2E controller. The controller assigns prefixes to nodes based on the network topology to allow PoP nodes to take advantage of route summarization and help load balance ingress traffic. This is recommended for multi PoP networks

The prefix of the entire CnWave network, is given in CIDR notation.

Specifies the bit-length of prefixes allocated to each node

The comma separate list of channels given to the controller for auto configuration. Manual settings in Node->Radio page do not depend on this setting. This setting is useful especially for PTP and small meshes that use single channel for the entire network. In such cases, set the required channel here and do not override in the node->Radio page. For a channel change, changing this setting alone will do. 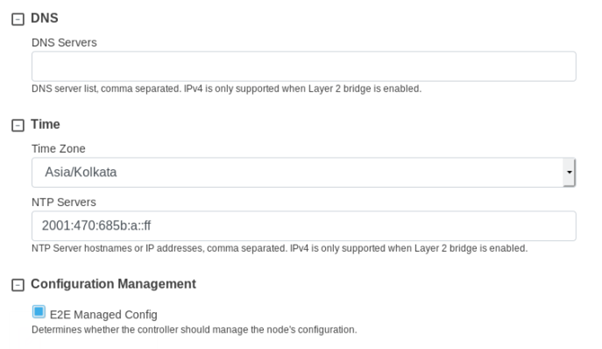 Time zone for all the nodes. System time in the dashboard, time field in the Events section, Log files use the timezone.

Comma separated NTP Sever FQDN or IP Address. All nodes will use this NTP Sever to set the time. Node time is important when 802.1X Radius authentication is used as it requires certificate validation. The time is reflected in the dashboard, time field in the Events section, and Log files .

Determine whether the controller manages the node’s configuration. Highly recommended to keep it enabled. 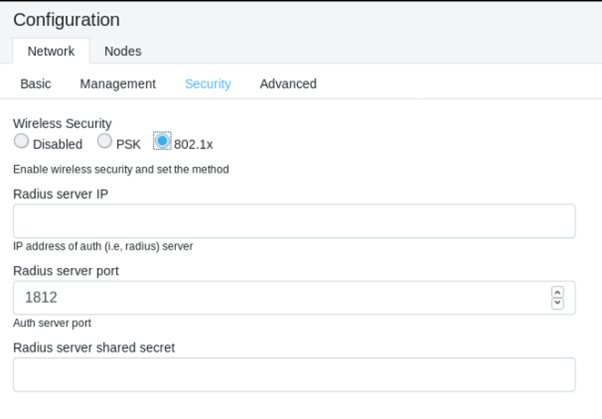 Statistics can be read from the nodes using SNMP. This setting enables SNMP

When specified, SNMP queries are allowed from the hosts belonging to this IPv6 prefix.

SNMPV3 user settings are self explanatory

Password for the GUI users can be configured here. Monitor is a read only user. 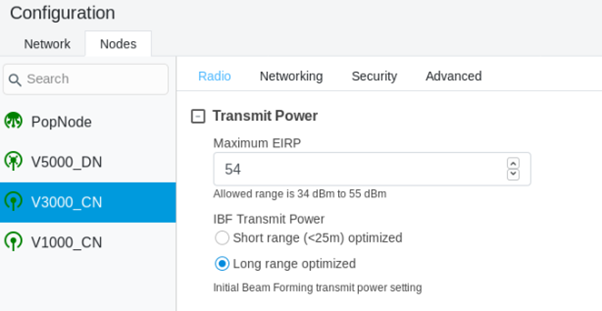 The maximum EIRP transmitted by the radio. Range differs based on the platform and country selected (in Network page).

Transmit power using during initial beam forming. When all the links are in short range, high transmit power can cause interference. Selecting short range optimized will prevent this. Post beam forming, automatic power control will make sure the radio transmits at optimal power

This configuration is applicable for V3000 and in PTP topology. Based on the range, wireless slot timings are optimized. Its important to first change the far end device.

Minimum and Maximum MCS used by the radio. To restrict to a particular MCS, set both as same.

When link is created in topology, controller automatically sets the sector’s channel and Polarity. Its shown in the third column in the above picture. To manually override, click the check box and select the channel in the node config. Note that changing channel/polarity will break the link. Its important to change for leaf nodes first and then higher up on DNs

Golay codes help in avoiding inter sector interference. In rare scnerios, individual links might require separate golay codes. Most scenraios, all the link belonging to a sector are configured same golay. Controller automatically sets the golay code. To manually override, select the check box and set the golay from the drop down. ‘Override All’ button helps in setting the same goaly for all the links in one go.

In some scenarios like lab setups, it may be necessary to disable GPS. 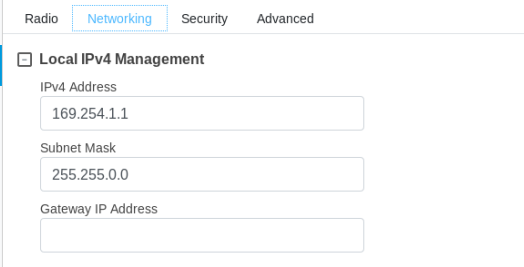 Static IPV4 address of the individual node. Node’s GUI /CLI can be opened using this IP address when directly connected over ethernet. For Over the Air access, L2 Bridge should be enabled. Its predominantly used on PoP nodes with onboard controller.

Subnet mask for the IPv4 address

Specify the VLAN ID. It can be one of the values from 1 to 4094. Incoming management traffic should contain the tag and outgoing traffic will be tagged. 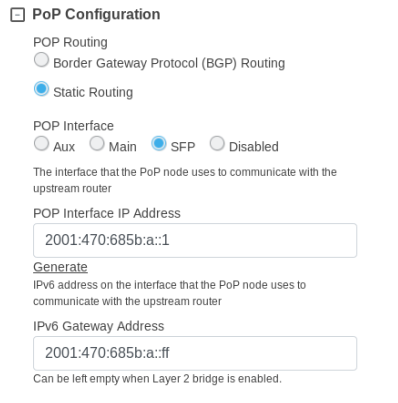 When the system is targeted for L2 traffic (Layer 2 bridge enabled) and onboard controller is used, this configuration is of not much significance, recommended to set to static routing

Wired interface on which PoP communicates to upstream router or switch when L2 bridge enabled.

Gateway address. Can be left empty when L2 bridge is enabled and no IPV6 services like NTP /Radius are used. 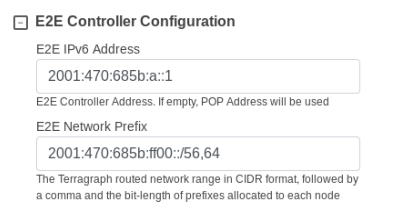 Address of E2E Controller. When using onboard controller on the same node, can be left empty and GUI automatically fills the POP IPv6 address.

Seed Prefix in the CIDR format followed by a comma and the prefix length. Should be specified when BGP is used. Otherwise, optional.

Individual Ethernet ports can be turned off with this configuration 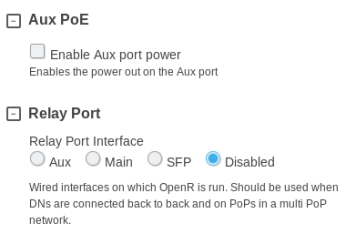 Note: Layer 2 config is present only on POP

When enabled, POP drops the downstream broadcast traffic. These broadcast packets could be generated from upstream or from other mesh nodes/downstream devices. This can be used for ‘Client isolation’ where subscribers cannot send packets to each other.

When enabled, IPv6 traffic is not transported in the Layer 2 tunnels

Specify the Ethernet interfaces on which OpenR is run. Its needed in two cases

Configuration options under Network-> Advanced and Node->Advanced are for advanced users who understand the cnWave configuration model well. In general, its recommended not to use these options

cnWave is based on Facebook’s Terragraph architecture. It follows a layered configuration model, with a node’s “full” configuration computed as the union of all layers in the following order:

The E2E controller manages and stores the separate config layers. cnWave nodes have no knowledge of these layers, except the base configuration on the image. The nodes will copy the latest base version (via natural sort order) if the configuration file on disk is missing or corrupt.

Network->Advanced tab shows the merged configuration from Base layer till Network override layer. 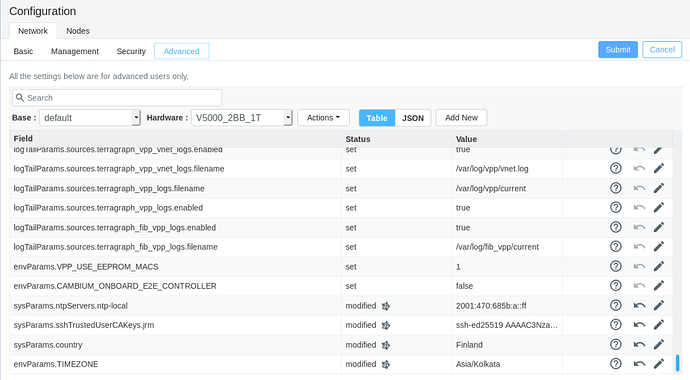 Lets us look at an example, ‘sysParams.country’. Its set to ‘Finland’ in the above screen and marked as modified with a star symbol. This means that this parameter is modified by the user and applies to all the nodes in the mesh network.

JSON view will show only the overrides.

The above screen shows advanced config of PoP node. We can see that PoP params are marked as modified, meaning a node level override is set.

Network overrides are also visible at this screen. Below screen shows country parameter, what can set at network, and not changed for this specific node.

The star symbol helps to distinguish it as a network override.