PPPoE is now a supported on CnPilot E-series devices.

Note: This feature is available from 3.1.1 r15 release build.

PPPoE combines two widely accepted standards, Ethernet and PPP, to provide an authenticated method of assigning IP addresses to client systems. PPPoE clients are typically personal computers connected to an ISP over a remote broadband connection, such as DSL or cable service. ISPs deploy PPPoE because it supports high-speed broadband access using their existing remote access infrastructure and because it is easier for customers to use.

PPPoE provides a standard method of employing the authentication methods of the Point-to-Point Protocol (PPP) over an Ethernet network. When used by ISPs, PPPoE allows authenticated assignment of IP addresses. In this type of implementation, the PPPoE client and server are interconnected by Layer 2 bridging protocols running over a DSL or other broadband connection.

This mainly involves the following steps:

2. VLAN - Interface on which client will run.

3. Auth - Username and Password to get authententication from PPPoE server.

1. We can check the status of PPPoE client from Monitor page. We can also see whether it got IP address from PPPoE server. 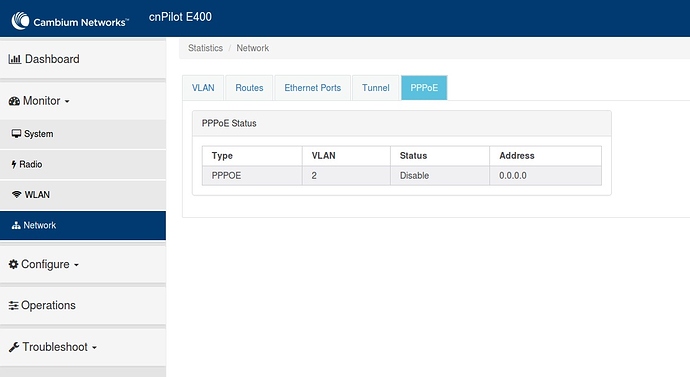 2. PPPoE interface statictics, which shows the counters for packets received and sent by the PPPoE sessions