We are feeding a small mini pop via a “temporary” 2.4 ePTP link due to tree coverage which has proven problematic. I know the ePMP 2.4 is basically not being supported anymore and we will be replacing the link with an Airfiber 2X in the near future, but thought I would note some quirkiness with the link. We had another 2.4 ePTP link running 9 miles that exibited similar issues but it was only up for a short time before it was replaced by AF.

We have intermittent issues where the Master will report it has 0 registered subscriber modules even though the link is still functional. That will progress to a state where the Slave eventually stops communicating and the master has to be rebooted, either manually or by the watchdog.

We’ve also seen that just before the reboot occurs, the Master will change from 0 registered subscriber modules to 65,534 registered subscriber modules. I managed to grab a screen cap just before it rebooted this time an its attached. Thought I would report it as it must be something quirky in the software. Also, never seen this on 5Ghz,ePTP, only on 2.4 if ePTP if that’s of any use. 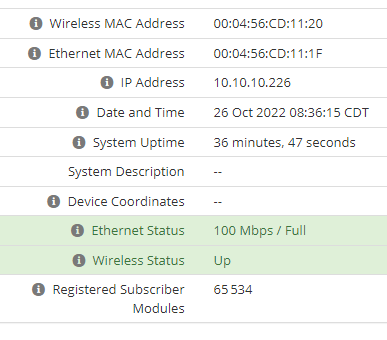 Is this running 4.6.2 firmware? have you tried running the newest 4.7 beta?

Same issue on 4.6.2 and 4.7 beta. Currently on 4.7 beta. Seems to imrpove a bit on the beta, but could just be wishful thinking on my part. It will sometimes run for days with no issue and then go through several days of “fits”, sometimes one right after the other. Load doesn’t appear to be a factor, in fact it seems to occur more often when the unit is under lighter load.

The Slave log reports nothing other than AP INITIATED DISCONNECT.and everything reconnects after the Master reboot. We swapped out the Master radio with no change, new CAT6a shielded cable, grounds, etc, etc.

SNR ratios on the 1.4 mile 10 Mhz ling are-34/-35 and MCS levels are 14/15. The link is clipping through the top of quite a few trees. 5Gjhz has no change. Its a pretty sparsely populated area and the parabolic dish is pointed away from the population zone 5 miles away.

Our other 2.4 ePTP link experiencing this is a 20 Mhz channel running 9.2 miles and is very, very rural. It also has good SNR at -31/32 running MCS 15/14 with throughput of 60+ meg both ways, plenty for the mini POP. Retransmission is higher that we would like at 20 percent, but its 2.4 on a 9+ mile link clipping tree tops, so actually not bad if it would just not lose its mind every few days.

We have the AF-2X’s ready, just need to schedule the time to swap everything out, which was our original plan anyway 2.4 back hauls are not something we want but sometimes you do what you have to do to reach the customers.