Here's a swap I did yesterday. They had 'non-Cambium' gear previously and performance was not very good.  They were a customer which we probably should never had installed - but we did.  It's got all the WRONG things - to far from the AP (~21 KM) and too many trees in the path, and the only thing that gives us any signal at all is 2.4 Ghz, and we all know that 2.4Ghz has too much interference to work out in the wild, right?  Well - 2.4 Ghz  ePMP saves the day. :)

Here's a photo of what cnMaestro tells us about the link.  20.98 KM from the AP, and the sector is pointing straight south, so I'm what....   30 degrees out of the center maybe.  And most importantly, it usually maintains good modulations and it works - over 20 Mbit throuh it in a 10 Mhz wide channel at 21 KM.  Their old (non-Cambium) gear struggled to give them an intermittent connection, and 1 or 2 Mbit on a good day.  Here's a photo of what cnMaestro shows. 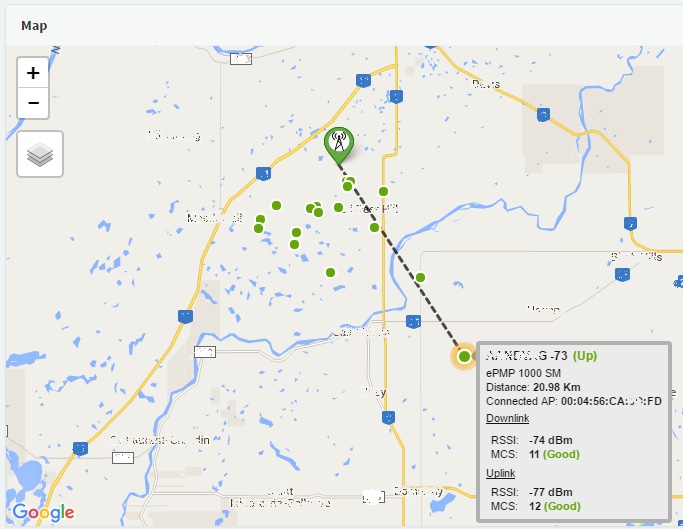 Here's a photo of their TV tower with the ePMP Connectorized with a 22dBi DualPol Grid on it... 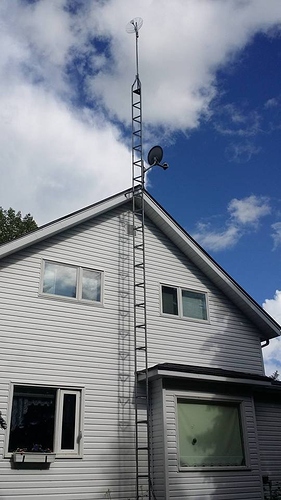 Here's the trees I see from the top of the tower - it is relatively clear once we get out of their bluff, but I've drawn a red circle about where I'm aiming to our tower 21 Km away. 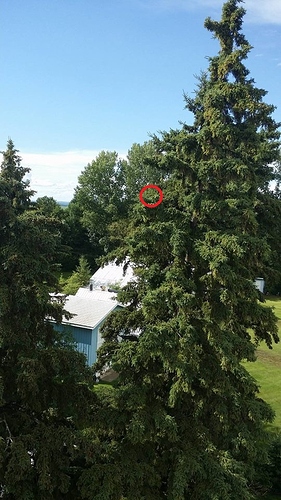 And this is what we get throught the link, about 21 Mbit agregate.  Their uplink struggles a bit - but only until Cambium releases their beam forming sector in 2.4Ghz...   right boys?  :) 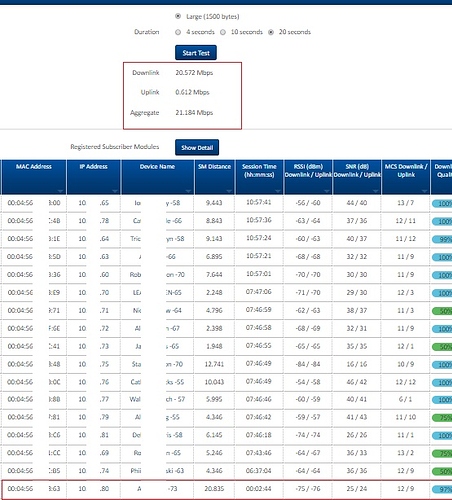 So - for anyone who considers 2.4Ghz dead, and anyone who is forgoing clients who are burried behind some trees, or anyone who's give up on 2.4ghz because it doesn't work well with 'other brands gear' - I encourage you to try Cambium's ePMP in 2.4 Ghz.  This client had an only semi-functional connection with their previous gear, and at about the same signal levels. They already have a 30' tower plus mast so going taller isn't really practical - but simply swapping one brand of radio to another brand of radio, that was simple and worked miracles.  :)

Once again, your stories are pumping me up even more to jump on the Cambium bandwagon.  Thanks again for sharing these success stories. They're exactly what we need to hear!

A) His antenna is missaligned or mast is bent I think - and we normally wouldn't install a -84. :)  We'll have to go and see what the problem is.  While we've had surprisingly good results with lower signals and with trees in the path - I (of course) want to point out that it's not magic...  signal is still king,a nd the -55's work way, way better than the -80's do. :)  Get everyone down to a -60 and it'll be wonderful.

B) This customer's QOS is set at only our basic 2 Mbit plan. So, when we test with him set at 2 Mbit, he gets the following in the speed test.

Now - unfortunately, ePMP's Link Test only tests at QOS speed, and there is currently no easy selectable option to ''test at full capacity'' or ''Bypass QOS''.  So before I can answer your question, I'll have to log into his radio and configure his QOS off in order to do that test. That is awkwardly cumbersome  - but currently necessary. Hopefully Cambium will add the function to be able to ''test full wireless capacity / bypass QOS''.
pgator17 (pgator17) July 8, 2016, 8:12pm #5

Can I see a couple screen shots of your QOS settings of your different package levels.

Can I see a couple screen shots of your QOS settings of your different package levels. 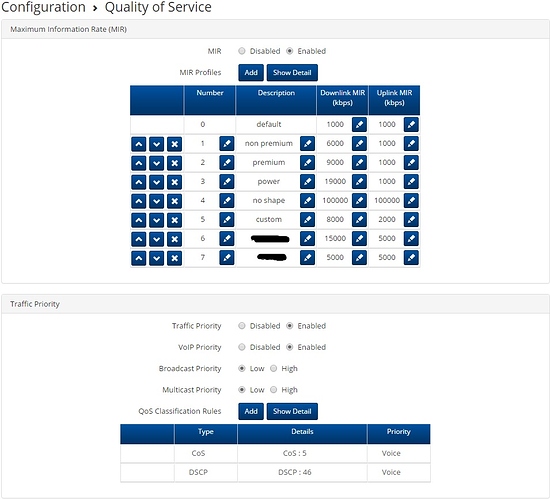 I've been getting quite a few questions about the antennas we're using - so I thought I'd answer what I can publicly here.

We've found these DualPol grids from Lanbowan in China.  Our contact is Anne (anne@lanbowan.com) and she's good for us.  The antennas are $39.99 ea - which is pretty good.  We get them with RPSMA Male pigtails righ on them, so they screw right onto a connectorized ePMP directly.

The exact model we've been buying is:
ANT2327D22PG-DP-RPSMAM 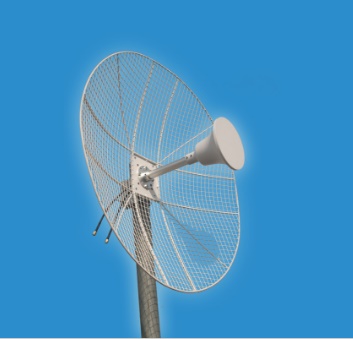 We've been using them on our older (non-Cambium) gear for a couple years and they've worked fairly well for us. They are rated at 22dBi and they are H/V, but the assembly of the feed horn has 8 bold holes, so it would be simple enough to assemble them +45/-45 if you wanted to. They also have a 28 dBi version in 5Ghz that we've used as well with similar good luck.  Of coruse, it's a grid (not a dish) so the Front/Back won't be as good as a solid dish is. Also, it's China - so quality sometimes is...  China.  But, we've been pleased overal..

The only complaint is  the shipping is expensive to us, , but since the antennas themselves are reasonably affordable...   it's kinda OK for us.  As I mentioned, the antennas are only $39.99 and depending on how many we get, shipping might be 50% or 75% as much.  However, the way I look at it is if these antennas were advertised for $60 or $65 with free shipping, that'd be a good deal too - so it's not horrible with high shipping costs.

Of course, the shipping cost to us is also because of where we are located in Canada, and also because Lanbowan doesn't seem to be creative enough to figure out cheaper shipping.  The only thing they do is ''ship via FedEx'' or ''Ship via Ocean Freight'' and shipping via boat is only applicable if I'm near a port to arrange pickup, which i'm not. I'm pretty land-locked here.  We did try one shipment via ocean and when it came into Vancouver, we then arranged for customs clearance and shipping by truck and that was quite a bit less expensive, but it also took a few days of leg work to figure everything out.  However, if you're used to importing stuff, then i't probably be simpler for you to do it that way.  For us, we only get them 20 at a time and I just bite the bullet and pay the expensive shipping.  But - 20 antennas worth $800 can be $1200 or $1400 landed too.

I'm impressed by how well the radios are working, and it makes me cofident that ePMP is the best choice for 2.4 GHz in the woods where signals aren't strong.

But you're usig a grid antenna in CANADA? I know certain corners of that country are not particularly cold, but grids are notorious for accumulating ice and snow. How have these survived in the winter? A solid dish like Force 200 strikes me as a much safer bet here in New England. Is the wind load on the icy dishes not so bad?

When you have installed lambowan antenna,  have you covered the rpsma connector on connectorized radio in such way or you preferred to leave at open air?

Hi. We are weatherproofing the heck outta them. We wrap them with Silicon Rubber tape, then electrical tape and then Silicon sealant. That's probably WAY overkill, but we've never used connectorized equipment that has it's connectors on the top before, and we don't know and don't want to underdo it.

All the other connectorized gear we've used either have pigtails which we connect and weatherproof, or they've had their RPSMA connectors on the bottom inside a cover. So, we've never had an exposed RPSMA connector on the top before and don't really know what to expect long term, so we're wrapping the heck outta them.

Maybe Cambium can comment on what they recommend we should do with those top mounted connectors?

Why don't you just change the QoS for that client to you Custom Package set at 100 Mbps Up and Down? That would get you your full test results. Then afterwards, set the radio back to the QoS package they are paying for and test again to ensure that the QoS is working?

Yes, of course. But thats a bit cumbersome, disruptive and time consuming. That is what we do now, but it's not something we can test while a customer is online working, since making those changes back and forth will disrupt the client. It's not that big of a deal, but if wishes were fishes, I'd like to be able to do a bandwidth test and bypass QOS.  With our older non-Cambium gear, it's doing it's QOS just on the CPE's ethernet, so when we test over the air throughput tests, we get the full air capacity speed, even while the client is restricted on their ethernet to X/mbit.

By the way - just an update on this particular client. The brand of gear we had there previously was the same signals, the same frequency, the same height, and the same antenna type... all we did was swap from that brand over to ePMP and power it up. Their performance went from 'half time sometimes kinda working, half time not working' to 'works flawlessly all the time', and they only call us now to pay their bill.

Their old gear used to have multiple re-registrations every day, and pretty much not usable for them in the evenings - and I just checked now and they have a 24 DAY session uptime, which is since the last power outage in their area.

Translate that into man hours - July 2016 until now, with zero support calls and zero truck rolls, instead of phone support talking to them all the time, and instead of sending out a tech several more times with no solution. This Jyly 2016 service call/upgrade was basically the last time we spent a dime or a minute on them. Translate that into dollar savings. :)

Fantastic results over time and thanks for posting an update.  Is this still looking good? Any hiccups with interference or firmware?

Hopefully they're still happy and your client.

@Lincs_Chel wrote:
Is this still looking good? Any hiccups with interference or firmware? Hopefully they're still happy and your client.

Hi.  YES.  This was one of those difficult installations from Hell. For years, they would call every couple weeks, and we would talk to them, and then we would eventually go to their place and try to ''tweak it'' every couple months.  We absolutely were losing money on them, but just too stubborn to give up and disconnect them.  BUT yeah - a nightmare situation with nothing we could really do, and their performance was... just not performing.  And, as I said, we would probably talk to them every other week - 25+ times per year, and probably make 6+ service calls (with no real possible way to help them) per year.

And in July 2016 we converted them to ePMP, and we have just simply not heard a peep from them in 40 months for any support calls.  We simply cash their cheques and they are simply thrilled.

The signals and antennas and heights and trees and distance was all the same - just changing the 'non-cambium' product over to Cambium ePMP and it was instantly better, and remains so to this day.

So it’s November 2020 now - 13 more uneventful months with this customer, and 13 more cheques cashed from this customer. They used to call every couple weeks, and we would go to their place every couple month’s with non-Cambium gear, and it was pretty much non-functional for them.

As this post says, in July 2016 (52 months ago / 52 cheques ago) we swapped their “other” gear for ePMP1000 2.4Ghz Cambium gear, and we haven’t heard a complaint from them since. It just works and works, and for their needs, it works perfectly for them.