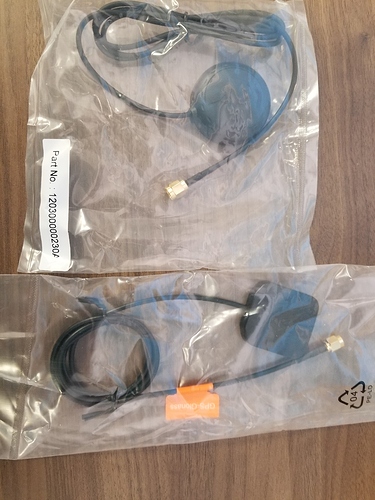 We have replaced all of the round ones with the square ones.

We had issues with the round ones randomly not working but the square ones fixed that issue.

We have problems with both the round and square on 1000, 2000, and 3000L, mounted horizontal or vertical, but it only matters to us on the 3000L's any more (since they can not sync over power you have no choice but to use their less than reliable onboard GPS).  Not completely sure if it's the 3000L or the pucks but at least some of issues are weather  related (fails when it rains) so assuming in those cases it's the pucks. The problem with the ePMP pucks seems to be quality control issue, some pucks seem to do fine while others fail at the first sign of rain and others just fail randomly. Such a frustrating problem...

Weather related GPS outages are usually a problem with how the water in the air (hanging or falling, doesnt matter) refracts the signal. We found that placing the puck so that it is shielded from the AP antenna (we mount them in the null below the antenna and AP and if on a stand-off mount we place them in the shadow hiding them from as many RF sources as possible.

I found the 3000L's internal patch to be less than stellar, but the square pucks when managed properly work near flawlessly. I have found that one of our 3000L's has a lot of GPS sync misses and drift, but this may not have anything to do with the GPS unit but the main firmware, waiting on the next beta past 4.5.4-RC7 to retest.

" We found that placing the puck so that it is shielded from the AP antenna (we mount them in the null below the antenna and AP and if on a stand-off mount we place them in the shadow hiding them from as many RF sources as possible. "

We replaced four 1k AP’s on a tower with four new 3k AP’s. Since the GPS did not work at all on this tower with the round pucks, we deployed the 3k with no pucks and only used the internal antenna. Upon bootup, only one AP received GPS. Hours later, three AP’s have GPS but one still does not days later. If I reboot the three AP’s that have GPS, two of them won’t see GPS for many hours again after boot.

There are two cell towers with AT&T, T-Mobile, and Verizon about 1.2 miles away and I suspect that LTE interference is causing GPS issues. We tried with no puck this time because some other threads recommended not using the puck to try and not amplify the LTE noise. Well the round puck and NO puck still results in not working GPS Sync.

Since the round GPS pucks did not work on this tower before with 1k AP’s, should I ask Cambium to send us the square pucks instead? I have a ticket open with them but they’re being slow to respond, all while we don’t have GPS sync running and customers are complaining of speeds due to interference from no sync.

Do you have the round pucks or square pucks? Ours came with the same old round pucks that our 1k AP’s shipped with.

They sent us 4 new pucks that have LTE filters in them. They worked like a charm. 20+ satellites tracked with great SNR. We put them on the top of the 4x4 sector in the spot that’s meant for them.

They sent us 4 new pucks that have LTE filters in them.

Interesting… they have LTE filters in them? Can you share any details on this?

Just what I have via email from cambium.

Here’s what they shared with me. They also said these new gps antennas will be sent with all new hardware 6 weeks from now. So I’m assuming for new gear being manufactures.

All of the GPS antennas you received today have the extra filter in it, even though the round one looks identical on the outside to the e1k and previous e3k antenna, inside it has a different filtering and amplifier scheme. The same is true with the square one. These are just from two different vendors, built to the same spec.

For deployment, I’d recommend putting them on top of the sector antenna in the GPS antenna holder area provided you don’t have any obstructions directly above and keep the sector as the highest part of the tower if at all possible.

The puck antenna has its’ main radiation beam covering about 70 degrees directly up, with about 10 dB nulls along the periphery of the puck. Turning it 90 degrees so that the dome faces the horizon would have the null up in the sky, so I wouldn’t recommend that, but there are reasons why this could help. One reason may be that having the puck in this orientation may be attenuating the interferer enough with the antenna element that the embedded LNA is no longer saturated.

When you do the deployment, we’d be interested in knowing the SNR improvement you see from this antenna to the old GPS antenna you measured previously. If this doesn’t fix the issue you could try mounting it at 90 degrees like the forums recommend, then lastly move it as far away from the radio body as possible. I am hoping that the additional filtering will solve the problem.

Thanks for the follow up. We are working to cut these antennas into production and will be on all units, however there will be a bit of a lag of 6 weeks or so until they are fully put in. In the meantime, we’re replacing them on a case by case basis.