This version 5.1 release works very well for us. 450Mbps - 460Mbps at 14.5Km link in a 40Mhz wide channel. The bandwidth testing was done with MikroTik’s RB4011 routers, using MT’s bandwidth test. Aggregate signals are -55, and most traffic is going at DS11 modulations 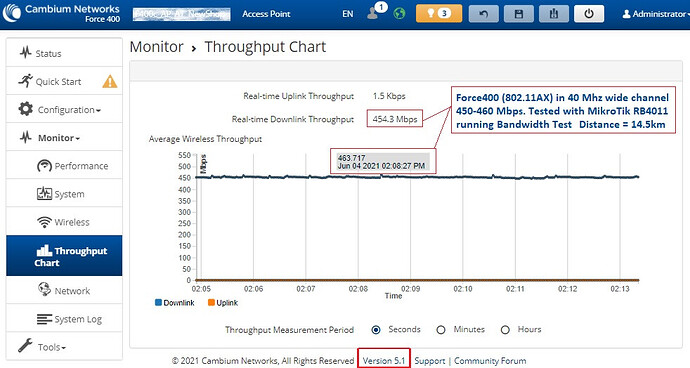 Thanks so much. I found some of these in stock - ready to try them out.

The release notes say this:
AXG-1936 This release adds support for extended frequencies ranges up to 6180MHz for the Force 400CSM and the Force 400-25 radios.

If this is for United States (FCC) then it should work in this freq range? So is that at 20,40 and 80mhz channels or just 20mhz like for 4.9ghz currently? I am ready to buy a set for testing, just need to know about this.

If this helps, our Force400’s running 5.1 Firmware show this in their available frequencies, which is up to 6180

Thanks for the info. I am not sure (are you in Canada?) if it works the same there as in US? Cambium, can you chime in here?

Ninedd, did you try the same link and the same tests before ? I have seen reports of throughput like this on russian forums before, so it should not be specific to version 5.1.

bump: Thanks for the info. I am not sure (are you in Canada?) if it works the same there as in US? Cambium, can you chime in here?

Ninedd, did you try the same link and the same tests before

I’ve been an early Beta tester, so yes, we’ve had Force 400 gear for a long time. We’ve had very good speeds all the way along, and I’ve posted lots of results in these forums, and on WISP groups on Facebook.

The reason I made this specific post above was that some people had said things such as “looks like it’s not totally stable yet” or “still not totally baked yet” or “still in beta”, and I wanted to point out that with the latest 5.1 release, that we found the F400 and F425 to be very fast, and very stable, and that all the previous quirks which I was aware of, are all cleared up.