Will the current hardware supports and takes advantage the newer of the frequency of the higher 6GHz?

Assuming they’re just 5GHz radios for now, is there a speed advantage on a 20MHz channel over a Force 300 PTP in currently usable US bands, or some other advantage? 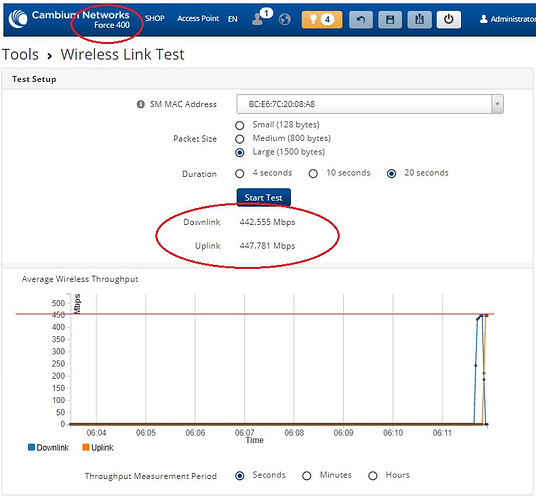 ninedd,
Just curious, what is the distance of this link?

I’ve also tested another link at 15KM in a Rural area with a pair of F400csm (connectorized) paired with 30 dB antennas, and very impressive performance there too. I’ll hopefully have time to post all those performance tests next week.

Thank you! I am looking forward to seeing your tests on that link as well.

This is a 15KM link – Force400csm (connectorized) paired with 30 dBi antennas. 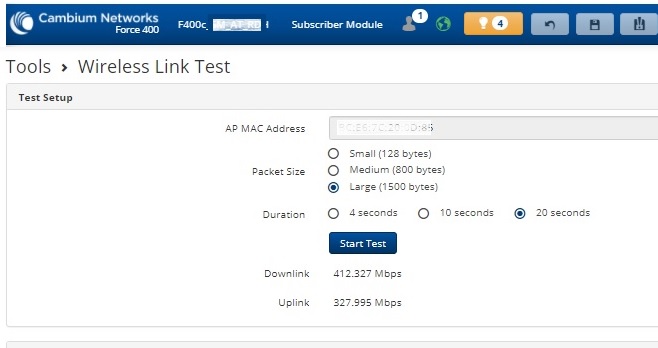 I also set MikroTik to try to simulate typical real traffic, which was 30 Mbit uplink, and the rest as downlink, and ran it for a couple hours. It was typically doing about 389 down (plus 30 mbit bi-directionally) – so about 419 Mbit average aggregate

By the way, this link isn’t modulating perfectly yet either. I’ll try to tweak the aiming, and maybe upgrade this to 3’ dishes (34dBi) and see if I can get it to stay at ‘MCS11 5/6’ on both downlink and uplink.

Those are bad numbers ? My UI links are a mixed bag. Some great , some not so great.Interference I’ve found to be a real killer with them even with isolators and slants installed. I’ve got one 40 Mhz/3 miles/256qam/50-50 UI link eeking out 200 M via the GUI . What’s reported in the UI and what goes on in RL are 2 different things.

Anything close to 50-60 Mbit TCP traffic virtually pulls down the link.

I generally find the Cambium numbers aren’t as amazing as the reported numbers in UI interface but I seem to be able to get much closer to real throughput numbers on Cambium gear.

Not a fanboy of either brand as I’ve had my fair share of Cambium issues as well.

Unfortunately checked with my disties today.Cambium 425’s are still going through certification process so don’t think I’ll be able to use them for any sort of links for at least next 6-8 months.

Thank you for the reply! I do not feel that my results are bad for the Force 300 25 ptp llink, but the 550 in a single 40 mhz channel at 5km with the highest possible modulation in both uplink and downlink and I can only get 230 mbps on a link test was disappointing for me based on price point of the 550.
I had a defective 550 on this 5km link once so I had 2 force 300 25 as backup and i was pretty much getting the same throughput, hence my disappointment.
Do you find any benefits to running 50/50 for your ptp links over 75/25?

in a single 40 mhz channel

Hi. Are you using the PTP550 with just a single radio? No radio bonding?

OK - the PTP550 and the Force300 are both AC Wave2 chipset - which means a single radio is capable of the same basic speeds. There is a certain ‘spectral efficiency’.

But - if you are only using a single channel, then it’s not surprising you’re getting the same bandwidth as a Force300… they are have the same bps/Hz spectral efficiency. If you’re only using one radio, you’ll get the same speed.

the 550 in a single 40 mhz channel at 5km with the highest possible modulation in both uplink and downlink and I can only get 230 mbps on a link test was disappointing for me based on price point of the 550.

By the way DigitalMan2020 - here is one of our PTP550’s with dual radios bonded. About 600 Mbit aggregate. That’s pretty much what’s expected, since a Force300 can do about 300 Mbit, and a PTP550 is basically two of them bonded together. But, I could also bond 2x 80Mhz channels and get 1,200 Mbit, or I could bond a 40Mhz and a 20Mhz channel and get about 450 Mbit throughput, or whatever my spectrum and needs require.

FWIW, I think the PTP550 is fatally flawed, because they don’t allow seamless channel switching, and mainly because changing virtually any setting on ONE of the radios, tears both radios (the whole link) down. So there’s really no effective way to use them, and to tweak and optimize a link. We have pulled all our PTP550’s out of service, except for the one above, which works OK for us. The ‘split’ channel’ flexibility is a great feature.

I have my Force400 link at 15 KM tuned in a bit better. I was previously only getting signal of -61 or so, but I did some more fine tune aiming, and got the signals up to -54, which then got the SNR to -30 (with is kinda our minimum normally). 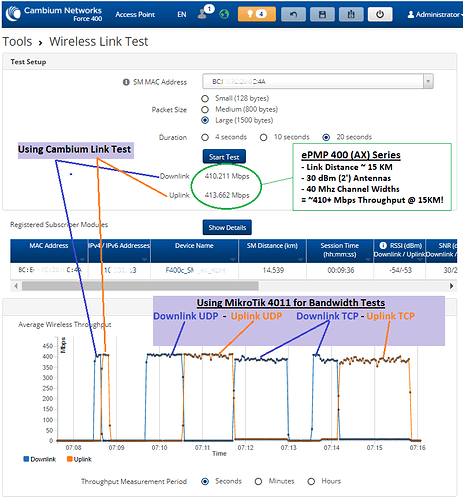 So, this shows our link at ~ 15KM, in 40Mhz Channel width, with 30dBi dishes… aggregate signals -54 or -55 or so. This above images shows the built in tests - followed by tests by MikroTik. The built in tests are 410-415 either direction, and then the MikroTik tests I did UDP and TCP, which were all in the 390-430 Mbps range.

And finally - if I do a bi-directional test from MikroTik… it’s simultaneously TX 236Mbit and RX 237Mbit, for what looks like a Bi-Direction aggregate of 473 Mbit ← WOW (Can that be correct?)

That’s all for today folks – it’s Friday and there’s Fish to be Fried, so I’m outta here.