Briefly, GPS Synchronization will minimize interference generated by the system onto itself, making AP collocation and frequency reuse feasible. A stable timing source is utilized by every AP in the system to precisely synchronize the start of every transmit and receive cycle within the TDD framing structure used in the Cambium Networks ePMP solution.

Figure 1 depicts two APs in GPS Synchronization mode while Figure 2 shows worst possible scenario for two unsynchronized APs, where the Tx/Rx cycles of the two APs completely overlap. With GPS Synchronization, the Tx/Rx cycles for every AP start and stop simultaneously. This prevents APs from transmitting while another AP is attempting to “listen” to its Subscriber Modules (SM). Prevention of this overlapping of Tx/Rx cycles is critical when the APs are collocated in the same tower, as the transmitting AP may interfere with the transmissions from SMs intended for a listening AP. 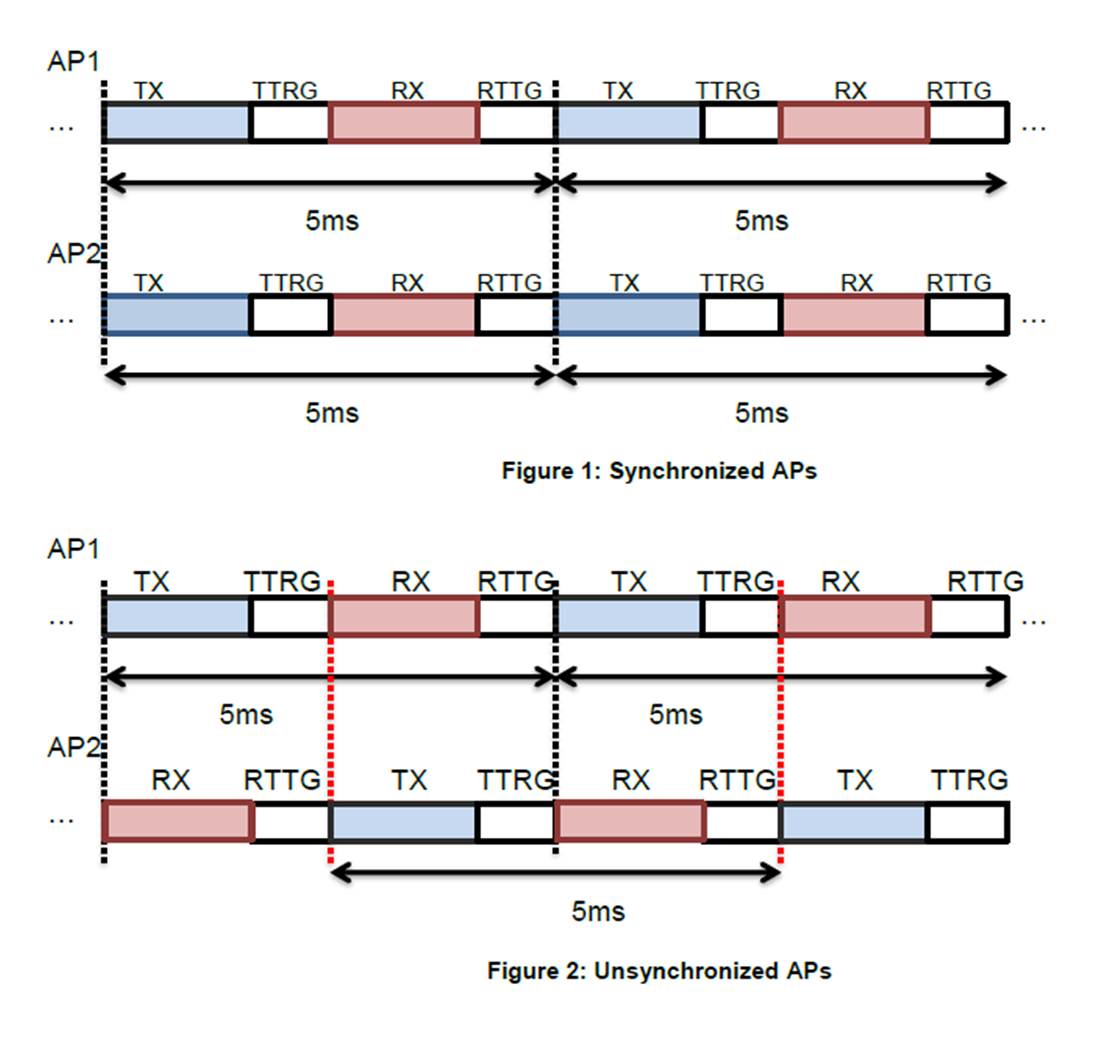 Channel Bandwidth – This parameter allows selection of the channel size used by the radio for RF transmission. The channel bandwidth does not directly impact the operation of the GPS Synchronization mode but it is recommended to use the same channel bandwidth in collocated APs to prevent accidental overlapping of channels. Remember that when using adjacent channels with collocated APs, a minimum of 5MHz guard band must be used.

Frequency Reuse - When doing RF planning for the deployment of collocated APs with channel reuse, it is recommended to use the channel reuse pattern described in the “ePMP ABAB Frequency Reuse Deployment” document (https://support.cambiumnetworks.com/files/epmp/). Figure 3 depicts the recommended frequency reuse pattern. Each letter/color represents a channel assigned to a sector on a tower (represented by the black dots) covering a certain geographical area. As explained in the reference above, this pattern gives the best possible isolation between sectors using the same channel. 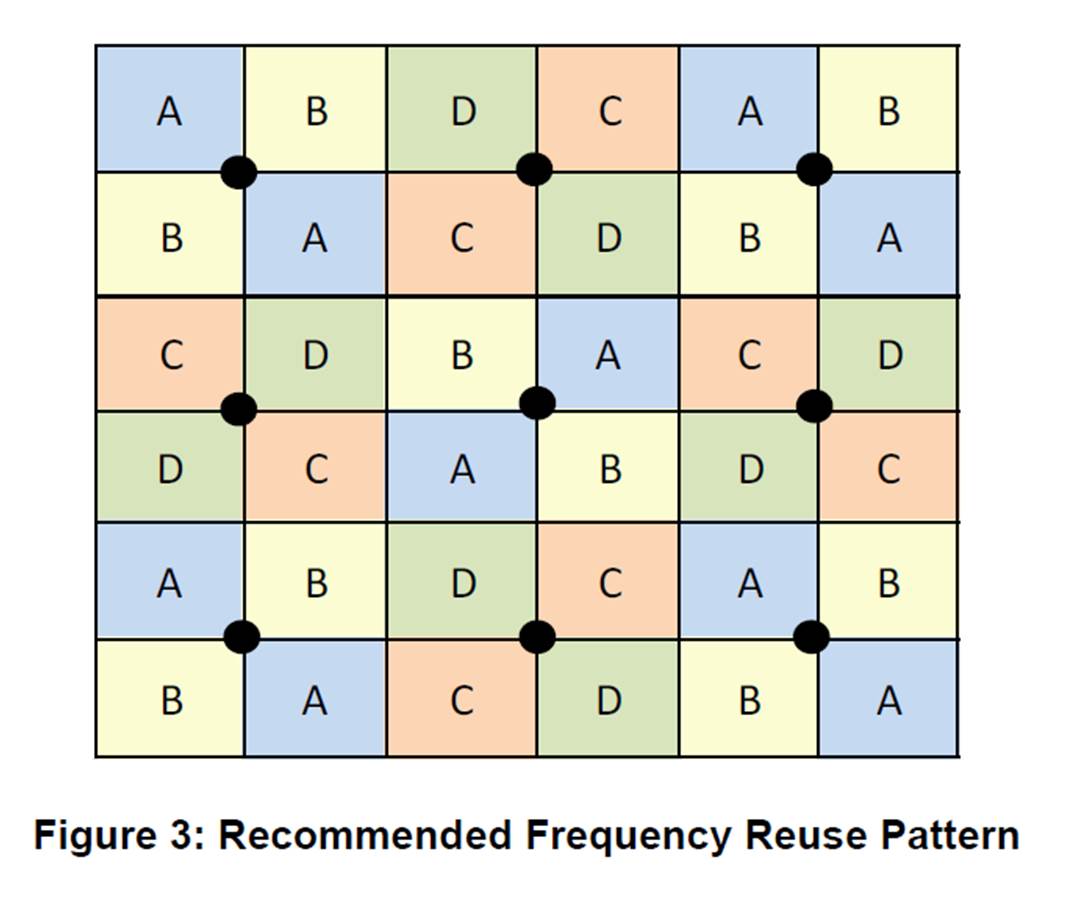 The Frequency Reuse parameter in the ePMP AP must be used in combination with the channel reuse pattern above during the deployment of collocated APs. This parameter is used to identify two collocated APs using the same channel. For example, in a tower where there are 2 APs, back to back, using channel A, one must be configured as a “Front Sector” while the other must be configured as “Back Sector”. Additional information on how this parameter should be set in case different synchronized timing sources are in use, can be found in the “ePMP Configuration in a Frequency Reuse Deployment” document (https://support.cambiumnetworks.com/files/epmp/).

Antenna Gain –This parameter allows for the configuration of the maximum gain for the antenna being used. It is recommended that the sector antennas use with each collocated AP are of identical physical characteristics and electrical specifications. The units for this parameter is dBi.

Subscriber Module Target Receive Level (TRL) – This parameter interacts with Automatic Transmit Power Control (ATPC) mechanism in ePMP and it allows configuring the target receive power level at the AP for all the SMs in the sector. With ATPC, the AP instructs each SM in the sector to adjust its maximum transmit power, so the SM UL signal arrives at the AP at about the level set in the TRL at the AP (e.g. -60dBm), independently from where the SM is located in the sector. The units for this parameter is dBm.

Both ATPC and TRL have a direct effect on self interference, as this mechanism will prevent SMs from transmitting at a higher power than necessary, which will be “heard” by other collocated APs operating on the same channel.

The default setting of the TRL was selected with colocated AP deployments operating on channels with relatively low noise in mind and it should provide a good compromise between AP-SM link performance and reduced self-interference under such conditions. The Subscriber Module Target Receive Level does allow a range of values from -40dBm to -80dBm though. Caution should be exercised when adjusting this parameter. If the value chosen for the TRL is too low, the quality of the radio link between the SMs and the AP may suffer, as the signal-to-noise ratio may not be adequate to allow the link to operate using higher modulations (e.g. 64QAM), impacting the data capacity of the link. On the other hand, if the value chosen for the TRL is too high, UL transmissions from SMs in the sector may interfer and degrade the performance of UL transmissions in sectors operating in the same channel. In cases when external interference (e.g. noisy environments due to other radio equipment operating in the area) impairs the UL performance of the ePMP system, increasing the TRL may be necessary. A higher receive power level at the AP may allow the signal from the SMs to reach the AP at a higher level above the noise, allowing the link to operate at higher modulations (higher data rates). Unfortunately, this also increases self-interference within the ePMP system, and it could make frequency reuse unfeasible.

Downlink/Uplink Ratio - DL/UL ratio parameter selects the duration of the Tx/Rx cycles within the TDD frame. In ePMP, there are 4 possible configurations for this parameter: 75/25, 50/50, 30/70 and Flexible. Only the first three DL/UL ratios or “fixed” ratios work in combination with GPS Synchronization. When using GPS Synchronization, it is recommended to configure this parameter identically for all collocated APs, in order to avoid self-interference.

The Flexible ratio option dynamically changes the DL/UL ratio during normal operation depending on traffic demands. It is not a “fixed” ratio. For this reason, it is not possible to synchronize the Tx/Rx cycles across collocated APs and hence, it is not available to use with GPS Synchronization. For the same reason, the Flexible ratio is not intended to be used with collocated APs operating on the same channel, but with single PMP AP installations or PTP links.

eDetect schedules scanning time within the Tx/Rx cycles and “listens” for on-channel WiFi signals. This includes not only signals from any standard IEEE 802.11 based device but also IEEE 802.11 based proprietary protocols (e.g. ePMP TDD, UBNT AirMax, etc). Detected signals are analyzed and summarized in the Tools -> eDetect page.

In the case of collocated APs, it is possible for eDetect to display the signal from another ePMP AP that is reusing the same channel. Since the scanning is allowed at any time during the regular Tx/Rx cycles, this is considered normal. If GPS Synchronization is in used by both collocated APs and they are configured following the recommendations in this document, they will not be interfering with each other. The detections corresponding to collocated APs with GPS Synchronization enabled can be safely ignored. For more information on how to use eDetect, please refer to the ePMP User Guide (https://support.cambiumnetworks.com/files/epmp/).

From the RF planning perspective, the ePMP Automatic Channel Selection (ACS) feature is another tool available to ensure the noise and interference in the available channels are at levels that will allow the system to perform optimally. Although it is not recommended to permanently enable ACS on a system on which careful RF planning has been performed and GPS Synchronization with frequency reuse is utilized, it could be useful to use the ACS band scanning and noise/interference scoring capabilities temporarily on each sector of a collocated AP deployment to ensure the best channels have been considered for the location. For more information on how to activate and use ACS, please refer to the ePMP User Guide (https://support.cambiumnetworks.com/files/epmp/).

A Look at Self-interference

Consider the following scenario below.

Both AP1 and AP2 are collocated back-to-back sectors in the same tower, and using the same frequency. Both AP1 and AP2 are transmitting at a combined transmit power of 23dBm, using 5G120 sector antennas, configured for the same DL/UL ratio and GPS Synchronization is enabled. Both SM1 and SM2 are units with integrated antennas. It is also assumed that Automatic Transmit Power Control is enabled on both APs and controlling the transmit power of each SM.

For the analysis of each case below, the following formula was used:

where Pwr(Tx) is the conducted transmit power in dBm, Gain(Tx) and Gain(Rx) are the antenna gains for the transmitter and the receiver respectively, and Loss(fspl) is the calculated free space path loss for the frequency in use. MiscLoss(Rx) and MiscLoss(Tx) usually account for additional losses (e.g. cables, connectors) at either the transmitter or the receiver respectively, but for the purpose of this exercise, they are considered negligible and not accounted for.

The tables below summarize the physical specifications and interfering signal levels affecting AP1 and its link with SM1 when the SM Target Receive Level has been set to -60dBm.

In this analysis, the effects of the radio devices nearby AP1 operating in the same channel are taken in consideration. As AP1 and AP2 are operating in GPS Synchronization mode, they both transmit and receive simultaneously, hence AP2 transmissions will not affect the ability of AP1 on “hearing” SM1 (no C/I can be calculated).

On the other hand, SM2 will be transmitting at some point, while AP1 is trying to “hear” from SM1. Notice that ATPC is controlling the transmit power in SM2 and setting it to a level lower than its maximum power while still allowing SM2 signal to reach AP2 at about the configured TRL. By choosing an appropriate TRL, the impact of SM2 UL transmissions on the AP1-SM1 link is minimized. The calculated C/I ratio (-62.85 – (-90.87)) of 28dB will allow this link to operate at higher modulations (64QAM), maximizing capacity.

The tables below summarize the physical specifications and interfering signal levels affecting AP1 and its link with SM1 when the SM Target Receive Level has been set to -40dBm. 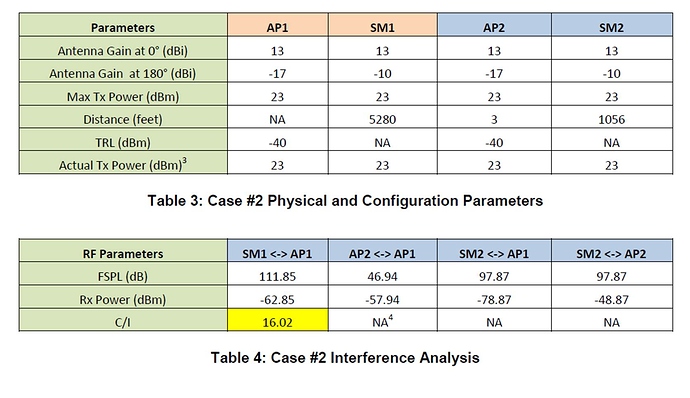 Notice this case is identical to Case #1, except that now the APs have been configured with a TRL of -40dBm. Again, SM2 will be transmitting while AP1 is trying to “hear” from SM1. Notice that ATPC is still controlling the transmit power in SM2 but because the TRL is now set to a much higher level, SM2 will increase its power in an attempt to reach AP2 at about that level. Unfortunately, even at maximum power, SM2 reaches AP2 below the configured TRL, causing SM2 to maintain transmissions at its maximum power. This has a negative effect on the AP1-SM1, reducing the calculated C/I ratio (-62.85 – (-78.87)) to 16dB, which is too low to allow higher modulations (64QAM) and hence reducing the capacity of the link.

The tables below summarize the physical specifications and interfering signal levels affecting SM2 and its link with AP2 when the SM Target Receive Level has been set to -60dBm. 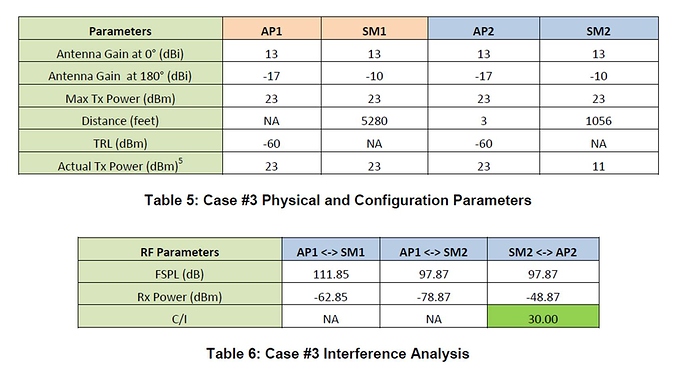 System self-interference on SM2 occurs when both AP1 and AP2 are transmitting (Tx cycle). As SM2 is “hearing” from AP2, it may also “hear” from AP1. Any factors that reduce the amount of AP1 signal that reaches SM2 will maintain or improve the quality of the AP2-SM2 link. Increasing separation or planning for obstructions between AP1 and AP2 antennas may help achieving greater isolation. From the system standpoint, the key characteristic is the electrical specifications of the sector antennas, specifically the front-to-back ratio of the sector antennas. It is this specific characteristic plus the other factors mentioned above that will help achieving the isolation needed by SM2.