So credit will be given to Doug at Blast for a portion of this idea.  However, I want to elaborate on my concept of changes in the ePMP GUI.  My technician's particularly like the Quick Start option, some WISP's would like this feature to go away after first config, and to change the priority of what's displayed first on the main page, IE RSSI / MCS / Quality / quantity.

So my thought was, on first boot have QUICK START be the screen that comes up, but then once settings have been changed and saved, the screen that loads first from there after would be an INSTALLER screen.  Basically the Home Screen but broken down to only the necessary options, (if these were customizable that would be even better), but the end game is the technician looking at this on his phone can see the RSSI, MCS, and Quality's fast and efficiently, on a mobile device friendly screen.  The Home screen, Quick Start, and other options would still be available, just through a few clicks on the menu system.

My goal in this recommendation is to bring to the community the concept and have more involvement on what the group as a whole would prefer for this startup screen.  AT THE SAME TIME, we need to consider that, at least in my opinion, we don't want to lose functionality of the radio for convenience of the GUI.  IE the more features for fancy GUI the more processing power we potentially sacrifice, I'd rather have a junk GUI and a powerful radio, than the opposite. 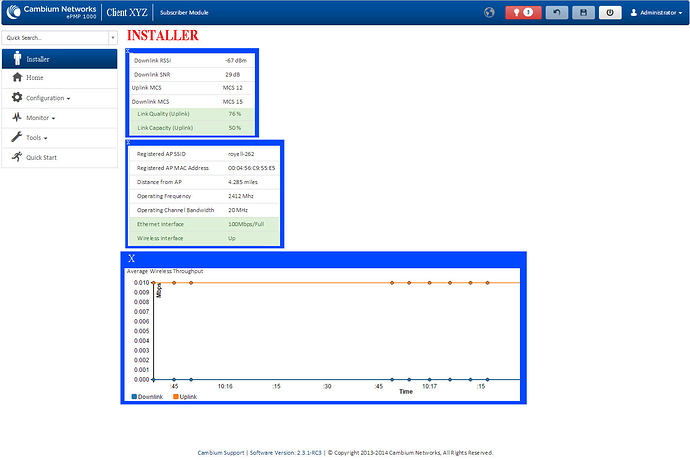 Ben, Great thread. Thanks for starting it. As you pointed out, every user may have his/her own opinion on what they would like to see on the GUI. I would love to hear back from the community on this.

I had suggested (email, not forum) a while back that it would be much more useful if we could preconfigure what fields appear on the quickstart page.  For us, about 85% of what appears there goes unused by the install techs, while about 20% of what they need to configure does NOT appear there.

Being able to edit (and include in config save/restore!!) the quickstart page to show what our techs need would be quite useful, we could simply include our custom quickstart layout in the preconfig we push to every radio before the crews get them.

I agree Ben Royer but add the eAlign tool on that page and then it would be awesome.