System Release 2.6.1 is a maintenance release and includes the following defect fixes:

Not a warning. The software upgrade will simply fail and you will see an error message in the notifications icon drop down, up on the right corner of the top blue bar. There will be no damage to the radio.

There are no immediate plans to add more ratios. I can see that you already posted this in our ideas section. Thank you for that. In the meantime, have you considered using Flexible mode where it dynamically adjusts duty cycle based on traffic demand in each direction? That is of course only if you are not looking into synchronizing APs.

good. I see an Implemented support for wifi, but my question is Whether you can use to EPMP access point and clients as other brands, I work well antler migrating or has a limit in That option With other manufacturers as customers

Epmp hardware can be used as a WiFi AP or client, if that's what you're asking.  I wouldn't suggest using the GPS capable devices as clients as that would be a waste of money and offer you little benefit if at all.

The Force200 is an amazing station device.

We need them to sync so flexible mode isn't really a good option.  Maybe the 2000 series will get me the additional uplink I need :)   But please consider adding one more scheduling option it would really help.  Thanks

Dang 4 months without an update, where's our new stuff?

Dang 4 months without an update, where's our new stuff? 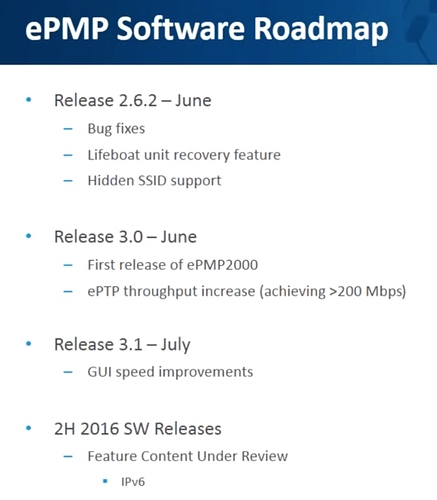