We have had some Force 200's, all bought around the same time, having some reboot issues and showing kernel panics in the crashlog.

Sent install guys out the first time to replace lightning suppressor and all RJ45 connectors. Still had reboots and kernel panics. Had installers replace horn today, and bring the original horn back to me. Top picture is horn with pins seated correctly. Bottom picture is of defective horn with pins pressed in flat. I honestly do not think my guys did this as pins are pressed too uniform and NONE will pop out. Usually a few are pressed in when it is user caused and some will pop out. These will not budge.

We have about 3 more doing the same thing (reboots and kernel panics). Has anyone else had horns like this? As in a factory defect? 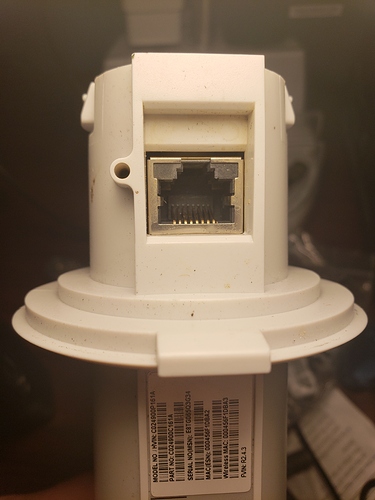 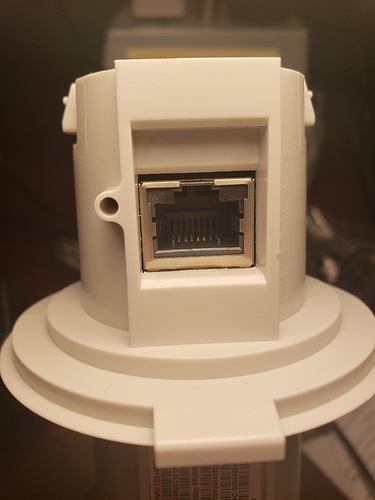 Usually, when someone pushes the jack upside-down the edge 2 pins are not damaged. Looking at the picture it is more likely a manufacturing defect. If this is a warranty case you can raise a request here https://help.cambiumnetworks.com/hc/requests/new

Regarding the device reboots,  can you share the tech support files after device crash so I could check the reason? My address andrii.khyzhnyi {at} cambiumnetworks.com.

Thanks. New horn has not rebooted since installed. Since we will be returning it under warranty I don’t see a reason to pull file unless you want us to do so?

Unless this is some new Cambium design and they are supposed to look like this you guys have a problem.

The last three force190's we installed seemed to be really finicky about the Ethernet connection, they would show no Ethernet or 10Mb and not data would pass. Redoing the way the cable was attached/plugged into the radios seemed to fix two installs but the 3rd one it would fail within a hour.  Replaced connectors on both ends, appeared to fix when the connector on the radio end was replaced but stopped working after a few minutes.  Replaced the 190 horn and again it seemed to fix the problem but the next day no Ethernet connection.  So assumed we had some 190's with a bad Ethernet and on the 3rd trip replaced it with a Force180 and no problem since. I had not got around to messing with either of the pulled 190's but when I read CWB's post I went and got them and sure enough, just like his picture of the 200.

Those 190's were the last out of the case so I cracked open a new case of 190's and pulled one out, same problem right out of the box, pulled another one and same thing, 3rd one also, didn't pull any more as I had other things to do but below is a pic of one of the brand new 190's right out of the box.. 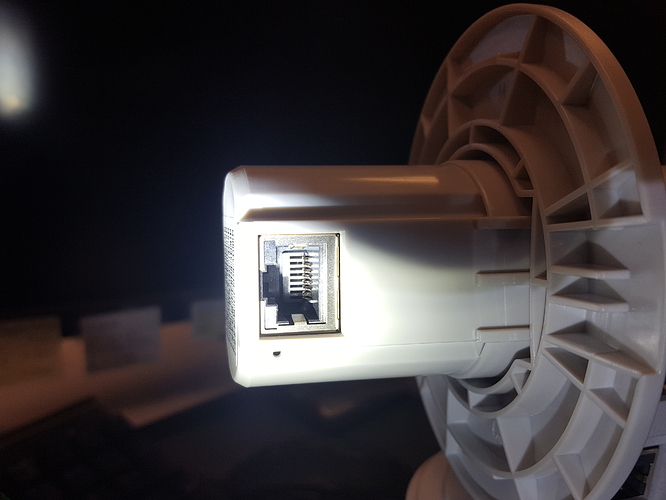 This is how ours look also fyi...

It's got to be the design of them. I'd have to look at other devices. But, I don't think any other brands have ends that look like this. Maybe it's just this design that has our "ends" not clicking, and your connections not working..

The no ethernet issue is exactly what we have when they don't click in all the way... I bet if you pull the cable it pops right out... Maybe?

What cable ends are you using in your case?

If you look at CWB's top picture, that is what they are supposed to look like, just like every other RJ port you have ever seen. While I would not put it past Cambium to try to re-invint the wheel and make a new new wheel that doesn't work as well as the old wheel, the cambium rep above did not respond to CWB by saying "Oh that's just our new improved design" he told him to RMA it.

We are using the shielded ubiquiit tough connectors. They click in just fine but if there is any movement in the cable at all the link stops working.

Gotcha. So, it "seems" too different, but similar issues.

We noticed the no locking issue from our Netonix ends with a customer we just installed that had a no Ethernet link issue. Upon investigation, the end was not fully locking. Our only recourse to that immediately, was to install an unshielded end we had laying around.

Something is amiss with this Force 190 port IMO. I'll clairify the Netonix issue in my thread. It IS in part I think from a change in their design. Coupled with a Cambium issue on this port IMO

We had loads of rebooting issues with our very first batch of Force 200's.  Ended up RMA'ing like 60% of them.  In every case, replacing the horn resolved the reboots.  We've had sporatic ones here and there since then, but nothing like we did a couple of years ago.  I don't think we ever inspected the ends that closely to verify it was the same issue you were seeing.  Just wanted to pass along that you're not the only one seeing reboot issues.

I went out today myself to check 2 F200s that have been rebooting for no apparent reason at customer locations, they both had these jacks. These were units easy to get to (on top of houses). They are not showing any type of crash log.

The BIG problem we have is that  the majority of our installs are 70-80' in pine trees. Those are not easy to get to, and take a while to replace. This is really disheartening. I am hoping Cambium will replace the ones we have had trouble with. I do not even want to install the new ones we have. I have a limited crew, that need to be on installs and true repairs, not issues caused by a badly designed RJ45 jack.

It is clear by looking at the two jacks that the pins on one jack do not extend as far across the jack as the other. It can not be making as solid of a contact with the connector pins.

Oh, and we only use the Ubiquiti Tough Connectors. We have no problem with them "clicking" at all in any type of equipment.

Well I guess that's a no go... Good god, I have about 20 old 110's in the back .. am I desperate enough to start installing those vile things again ?

Of note, the 6 300's I have I have been setting on for around 8 months waiting for Cambium to get DFS channels approved  and all 6 of them have the curled pins. And your brand new ones have them so this has been a thing for 8 months and Cambium quality control never caught it ?

I talked to Baltic and Streakwave and they are supposed to be checking the radios they have in the warehouse to see if they have any that aren't screwed up but I haven't heard from them yet so I'm thinking they do not.

So, I'm curious. You don't feel this is an RMA'able issue. And Teir zero support lead you astray??

Sorry, I had to get that jab in. It's pretty normal IMO that they don't really know what's going on.


..... the 6 300's I have I have been setting on for around 8 months waiting for Cambium to get DFS channels approved  and all 6 of them have the curled pins. And your brand new ones have them so this has been a thing for 8 months and Cambium quality control never caught it ?

For the record, ourForce 300's are also around 8 months old. We got them when they came out to see how they evolved with software. Only used inside shop enviroment so far. That is why I described them as brand new. Do not want anyone to think I am confirming the ones fresh off assembly line are still coming with this jack.

Just got an email from our suppliers, so far no one has any radios without the bent pins.

" I am not finding any units without the issue you reported.  I am trying to get additional information from Cambium.  This is the first time I've heard of the issue and seems like, as you mentioned, the way these are designed.  However, the part I am not understanding is why they are approving the RMA if they don't have any units out there without the bent pins.  I will get back to you with more information ASAP.  Again, I am very sorry for the delay. "

And while Cambium customer service has said they will RMA all of the radios we have with bent pins, they seem to be really dragging their feet making me think that, as the supplier says, there are no non-defective radios to replace the defective ones...


And while Cambium customer service has said they will RMA all of the radios we have with bent pins, they seem to be really dragging their feet making me think that, as the supplier says, there are no non-defective radios to replace the defective ones...

Be patient... it takes a long time... the last RMA we did took around 3 months total.