Force 200 shows good SNR but tons of interference on eDetect

Hey all, wondering if any of you have witnessed this kind of strangeness before - We had a customer with force 200 running 3.5.6 that was complaining of drops, in the radio we could see a very hot signal from their router, but the SM had an SNR of 40.  We changed the router frequency and their service improved immediately, but the SNR measurement stayed the same.  I just find it strange that the SNR looked so good when there was so much noise being shown in eDetect, and it didn't change at all when the interference disappeared.

Very interesting, I'm wondering if this has something to do with eDetect actually looking for WiFi frames and displaying it as interference, vs. the ePMP SnR rating showing just overall background noise. WiFi can also be bursty, perhaps it's not constant enough to be registered by whatever metric is used to calculate SnR? This would explain the drops issue.

Example; currently we have a 2.4ghz customer with a -64 RSSI. His internest has been great for the last 2 years. 3 months ago, his neighbor went and bought 2 Harbor Freight wireless cameras. His internet went to crap and he gets disconnects. These cameras do not show in edect, and we did not bother running spec-an as we know it is the cameras. His ealign shoots from -64 to -45 periodically for a few seconds which is an indication there is strong interference (from the cameras). His download MCS rates are now all over the place, which is a huge indication of strong interference. The disconnects also tell us he has strong interference. Due to veg and his distance from tower, we can not move him to 5ghz. We basically have his SM wide open allowing him to get as much internet he can when he can.

Here is the kicker, with all this interference, for a -64 his displayed SNR is 34db, when his RSSI shoots to -45, SNR rises to 53db. You add 64 and 34, you get 98. Add 45 and 53, once again you get 98. The ePMP (F200 in this case) sees the noise floor as being -98dbm regardless of there being true interference from the wireless cameras. All signals are based against this -98dbm noise floor to come up with the displayed SNR value.

I am going to give a better example using eDetect for a customer that has many routers and devices connected to routers showing in their SM's eDetect.

This customer is in a small community in a very rural area. Their options are us, Viacrap, Hugedissapointmentnet, and Centrystink. A yound lady in this community has been doing online schooling for years. She tried both satellite options, but did not bother with Centurylink as they only offered 1.5Mbps in her community. She called us a little over a year ago. She wanted our 15Mbps package. We went out and did a scan and saw all these 2.4Ghz devices and told her it may not work (we could only connect with 2.4Ghz). She pressed us saying we had to be better, even with all the interference, than the sat options. We took a bucket out, ran a guy up and saw that during the day, even with the interference she was able to pull 15Mbps.

We installed her. At night she can pull 8-10Mbps max as her neighbors cranking up data at night as well, which cranks up interference. She is happy with our service compared to what she had. Says she has very little issues with her classes and she can watch netflix. Could do none of that with the sat options. Anyway, I just took the following sceenshots. They show that even with all the interference on the channel (edetect scans), her SNR is still displaying around 25db. It varies some, but not much. Sometimes it varies in a postive direction. On the other hand, her download MCS values are scattered, and she has disconnects due to the interference.

So while I say we do not really use SNR values, we do. We just take them with a grain of salt. We rely more on MCS values and disconnections. 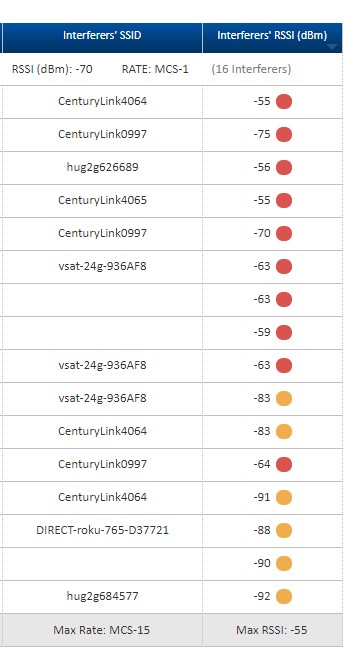 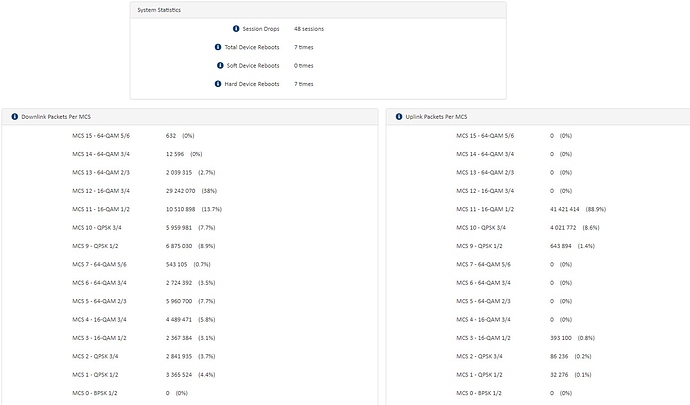 These cameras do not show in edect, and we did not bother running spec-an as we know it is the cameras.

Plus - in order to run a Spectrum Analysis, you'd have to drive to the clients house and run it from there.

There's no way to run a SA remotely - not even the option tell the radio to disconnect from the AP, then to run the SA for a time period, and then to reconnect and display the SA's results.  Also there is no way to do a '802.11n type of Site Survey' with a 'just display a complete table list of radios you hear'. eDetect does't do it, Monitor -> Wireless doesn't do it.. nothing.

So basically there is no direct way to see the interferers at the client side without driving there... only ways to 'imply' them by how often the client disconnects and by the MCS rates.

That is very very interesting, thank you for the detailed write-up!