I'll post over here as well since it happens on non beta firmwre (last post was in beta section). We are having terrible reboot issues with the Force 300-16 hardware. Running 4.3.0.1, 4.3.1-RC7 and 4.3.1-RC21 all have the same problem. 4 of our 5 Force 300-16's reboot constantly. Sometimes over 100 times a day. Or, they will go offline for 6 hours and then magically come back. None of our Force 300-25's have this problem but almost all of the 16's.  I can't get them stable and it is costing me reputation and customers. I've been a Cambium user for years and never had a single issue unitl the 3000 launch. I see others posting with the same issues. Anyone have stable Force 300-16s? Maybe a bad hardware run? Or is this firmware? What is going on?? 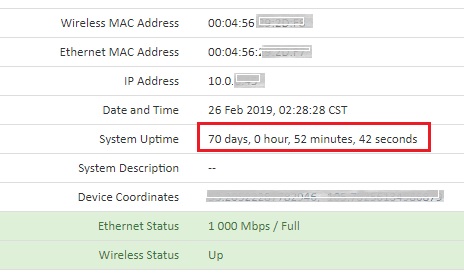 I can't comment on Force300-16's unfortunately... I don't have any yet.  But the Force300-25's (which I would think would be the same radio/board with just a different antenna, no?) we have uptimes over 70 days.

I have forwarded this to our development and support teams.

Thanks, Ray. It is the strangest thing with the 300-16's. We had one reboot 35 times yesterday, go off line for 6 hours and then with no intervention at all, it came back and has been online for 12 hours now - knock on wood. This is what we see on the other ones as well. No temperature or weather patterns that cause this and they don't all do it at the same time. I sent the troubleshooting logs to support for two of the radios. We pulled one of those out of service thinking it was hardware but I'm having second thoughts about it being hardware.  I would think the 16 and 25 are the same chipset, just a different antenna. Why do we only see this on the 16's?

Could you please share the tech support files (Tools -> Backup/Restore) from the radios after they reboot, so we can check what might be causing this.

Please submit a request and attach the files. Here is the link:

This was done a week ago. Ticket #176976 Support files were uploaded.

I have sent you an email on the ticket.

Sorry about the delayed response.

I do not know what the problem of FORCE 300 SM, I see that yours takes many days without restarting. Because I still have the same problem. What currently helps me is that I occupy the watchdog to restart my SM when it crashes, but it gets to have up to 10 or more reboots a day. I already have a case in support of cambium, but I have 2 months and there has not been a solution.

Mine crashed when I tried to turn on watchdog… Never was able to get it to stick.

We have 3 300-16's that have been running 4.3.1-rc21 for 7 days now. All are connected to a 3k also running same software. Only one has rebooted so far. User (one of our installers) was gone for the weekend, came back home Sunday, and right after firing up Amazon videos his internet went down. Came right back up in a minute or so. He logged into unit and saw where it had just rebooted. We will be putting a few more up soon. Knocking on wood ours do not catch the same cold yours has.

Did you make one master template for the 300-16's and put it on all 5 units? If so, it could be the first file is corrupt. Especially if you made that template with older firmware that may have had some hidden issues.

I have seen this many times with two-way radio equipment. We would have batches of radios come in with newer firmware. Use a template from older firmware and modify template for current customer. Radios either immediately start to do crazy things or start after customer receives radios. We would have to dump factory file into radio, read factory file back out, program by hand, dump back into radio. In extremely bad case we would have to reflash firmware to radios. Was worse in the early to mid 2000's, but we had it happen with a batch of Vertex radios as late as 2016.

I ran into this back in the day playing with dd-wrt routers too.

Well, we uploaded 4.3.1-RC23 to all of our radios. Also changed a bunch of settings per a conversation with Eric Ozrelic. 26 hours later, we have had one reboot from a Force 300-16. This is one that rebooted or went off line many times a day. An improvement. We have two 300-16's that have never had a problem and 6 300-25's that have never had a problem. We have factory reset the 16's and built configs from scratch.

Cambium has RMA'd our two 300-16's that would not stop rebooting so they can look at them in more detail in their lab. Our issue is still not fixed but improved. I am leaning towards a bad lot of hardware but we'll see what Cambium says. I'm super hesitant to put out any more 16's at this point.

We've got 3 force 300-16 which all reboots the whole time, sometimes every 2 hours, sometimes it stays on for a day. Please Cambium help!! Also our 25's no problem at all.

Out of curiousity, for the 16's that are rebooting, do you guys have spectrum analyzer enabled? I ask because when the 300-25 PTPs were sold, the analyzer would cause randomly and constant reboots. There was also a bug that if you had a 1gb eth link, it would cause rebooting (going to 100m fixed as a bypass)

I dont have any 16's so i cannot try those, our 25s are not rebooting

updated one to 4.3.2.1 prior to install with a linktech 15w. and after the inital reboot it was only stable for 30s before rebooting itseld. set it aside and updated another to 4321 and it was stable for 20m-2h before needing a powercycle to reconnect to the ap.

all on 4.3 that came (preloaded) have been solid from what ive seen.

Could you please share the tech support files (Tools -> Backup/Restore) from the radios after they reboot.

Please submit a request and attach the files. Here is the link:

We are thinking about using the 300-16’s in a upcoming deployment. Im curious after reading the comments in the threads if you guys are still having issues with these radios or was there a solution to the problem?? TIA

Hi Phil - we are running version 4.5.6 or 4.6.0-RC35 firmware on all our Force300-16 and Force300-25 SM’s and we have essentially zero spontaneous crashes or reboots. Our uptimes are basically until the next power outage or firmware upgrade.